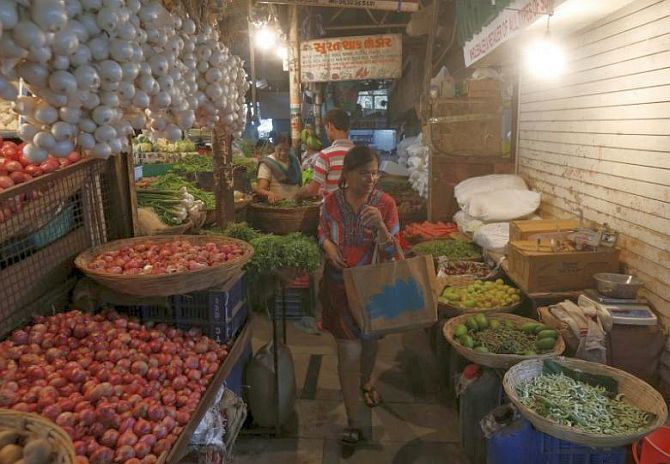 The Economic Survey on Monday said the average retail inflation has declined to a six-year low of 3.3 per cent in 2017-18, with the economy moving towards a more stable price regime.

The Survey for 2017-18 was tabled by Finance Minister Arun Jaitley in Parliament on Monday.

He is scheduled to present the last full budget of the current Narendra Modi-led NDA government on February 1.

"Controlling inflation has been a priority area for the central government," the survey said, adding that inflation in the country continued to moderate during 2017-18.

Consumer Price Index (CPI) based headline inflation, factored in by the Reserve Bank while arriving at its bi-monthly monetary policy, averaged 3.3 per cent during the period which "is the lowest" in the last six financial years.

The survey noted that the economy has "witnessed a gradual transition" from a period of high and variable inflation to more stable prices in the last four years.

Headline inflation measured by the CPI has remained under control for the fourth successive year, it said. 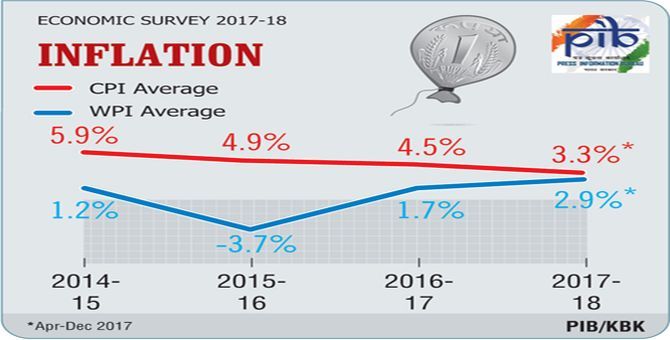 "In fact the decline in inflation in the first half of the current fiscal year was indicative of a benign food inflation which ranged between (-) 2.1 to 1.5 per cent," the survey said.

This has been possible due to good agricultural production coupled with regular price monitoring by the government, it added.

As per the survey, the rise in food inflation in recent months is mainly due to factors driving prices of vegetables and fruits.

"If we a look at state-wise inflation during 2017-18, many states have witnessed a sharp fall in CPI inflation.

Inflation in 17 states was below 4 per cent during the period.

"This has been possible due to various efforts made to contain inflation at various level by the government," it said.

The document further said the GDP growth has averaged 7.3 per cent for the period from 2014-15 to 2017-18, which is the highest among the major economies of the world.

"That this growth has been achieved in a milieu of lower inflation, improved current account balance and notable reduction in the fiscal deficit to GDP ratio makes it all the more creditable," said the survey report authored by a team led by Chief Economic Advisor Arvind Subramanian.