'It’s not a continuous exercise that you give them money. They are commercial entities and they should be earning for themselves now. Therefore, I don't think we need any extra capital,' says Finance Secretary Rajiv Kumar. 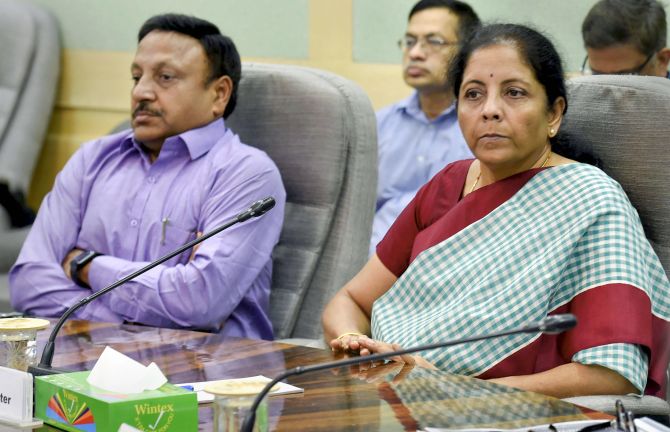 Finance Secretary Rajiv Kumar talks about the government’s thought process behind the latest merger of public sector banks and how it helps in achieving various objectives, in an interview with Somesh Jha.

India’s economic growth stood at a six-year low of 5 per cent in the April-June quarter. Will the slowdown be arrested?

Look at it from two-three different angles. Growth is robust when it comes to the services sector, aggregators in various sectors, fintech, IT [information technology], etc. With more digitisation, we are moving towards higher value addition in businesses showing robust growth.

When it comes to sectors such as manufacturing or real estate or those related to infrastructure, one is taking a whole lot of consultations. The finance minister has also announced a number of steps. It’s an ongoing process. We will come out of it.

Can you explain the rationale behind the merger of public sector banks (PSBs)?

If you join the dots to what we have been doing to the entire ecosystem in the financial sector, you will find that there was a road map to clean them (PSBs), make them robust in terms of higher recovery, and lower NPAs (non-performing assets).

Having done that, the PCR (provision coverage ratio) is at the highest, NPAs are reducing, recoveries are large, and 14 PSBs are in profit in the first quarter.

This was the right time to do the merger, which is technology-driven, risk-protected, and its size and scale is such that you can have global aspirations, positioned to support the $5-trillion economy.

Demand in the economy has to match credit expansion and that has been enabled.

But how do these mergers enable credit? A question being asked is: “Is it merely collaboration between banks?”

There are going to be huge efficiency benefits. We can see this from the merger of Bank of Baroda, Vijaya Bank and Dena Bank.

If you are talking from a position of strength, you can invest in technology, get efficiency gains in cash management, among others. There is tremendous amount of efficiency gain through synergy and scale. Scale gives you heft, which can be leveraged for credit and growth.

The merger exercise is coupled with governance reforms and capitalisation. So, it is a well-planned road map.

Do the recapitalisation needs of PSBs go down because of merger?

That’s a good question. Most banks today are maintaining the regulatory capital requirements. Hence, the need for capital is not too much and we have taken care of it.

Banks under the Prompt Corrective Action require capital and we have provided it to them. The capital requirement following the merger certainly does not increase. It actually goes down.

By how much? Is there any estimate, when you talk about the latest round of merger?

We have budgeted Rs 70,000 crore for this year. This exercise (of merger) was going on since that time. How much savings can be there?

We have provided everything in Rs 55,000 crore that we have announced to provide to banks. Now, bank boards have to assess the position and come up with their suggestions.

State Bank of India doesn’t need capital. Bank of Baroda was rewarded for its stellar financial performance and we are capitalising it.

But since risk and NPAs are reducing, it’s unlikely that there will be any further demand for capital, especially after giving banks so much strength.

Banks also have to be on their own and raise capital themselves. It’s not a continuous exercise that you give them money. They are commercial entities and they should be earning for themselves now. Therefore, I don't think we need any extra capital.

The minimum public shareholding is at 35 per cent. But the government’s share in PSBs has been going up. When will the exercise of shedding stake begin?

From the corporate governance point of view, there should be adequate public float in the market for checks and balances.

You couldn’t have done it earlier when you weren’t in a sound position. Having achieved that, in right time, they should definitely have more public float.

What is the timeline?

Let the merger process take place. We do not want any disruption right now, which is the first priority. When valuation gains come, we will examine at that stage.

Why did you leave out a bank like Bank of India from merger?

Bank of India itself is a big bank. It came out of the RBI’s PCA framework recently and it requires time to be on its own.

What about IDBI Bank?

The plan to privatise it was shelved and, instead, LIC took over the bank. IDBI Bank is making a lot of progress. It’s making progress in terms of business synergy gains with LIC -- cross-selling, bank assurance, etc. If you see the last results, their net NPAs have gone down drastically -- close to getting out of PCA. Its operating profit has also improved.