Four years before the arrival of the new century, long before Facebook Live and InstaChats, arrived the Rediff Chat, the Internet's first forum where Readers could chat with Newsmakers.

Among the many, many, many newsmakers hosted on the Rediff Chat was the Legend himself: Sardar Milkha Singh.

Presenting the transcript of the Milkha Singh Rediff Chat, retrieved from the Rediff.com Archives. 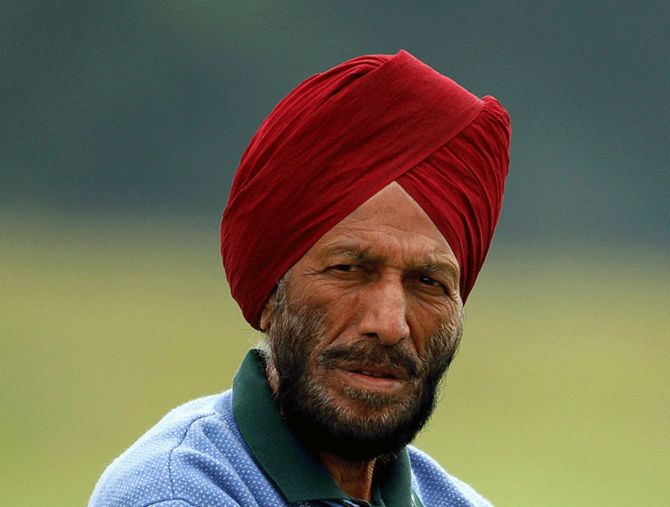 August 22: 2001: The Flying Sikh was in full fettle after rejecting the Arjuna Award.

MILKHA SINGH: Hello, I am Milkha Singh on this side please ask me your questions.

punkaj : hello mr singhseem to be annoyed with the dealing of sports ministry,tell me the exact reasonu have no right to criticise the current lot of indian athletes

MILKHA SINGH : I am not the only one who is criticising the present lot of athletes. The entire nation is doing so because they have failed to repeat their domestic performance at the international level and they know it well what they do here and what they do there. Even the coaches know about it.

butterboy : hi, which is the major factor contributing your success ?

MILKHA SINGH : Hard work,discipline dedication and will power are the factors that have contributed to my success in my sports. No athlete today is doing what I did. I was nearly on death bed many a times and I vomitted blood because of my hard work and it went through my urine also. The present day athletes lack dedication and that is why the standard of the Indian athletes is going down every year.I have watched the World Athletic Meet atEdmanton in Canada and I feel we are fifty years behind them.

MILKHA SINGH : I say that some and not all athletes take drugs because they perfrom well in India and whenever they go out they don't repeat the same performance because the drug test is there after running. Ben Johnson took drugs and Carl Lewis reported against him and the medal was taken away from him. It was humiliating to the country he represented. I would appeal to the young athletes not to resort to drugs to improve their performance. Even the coaches and officials should prevent them from doing so.

punkaj : but sir the facilites u and allof urs contemporaries got from mr partap singh kairo are not given to these athletes so could they can perform we can't treat them with our eyes shut and just go on critcising them

MILKHA SINGH : Pratap Singh Kairon gave me facilities because I was world class. In my time the kind of facilities were available were nowhere then the facilities available to the present day Indian athletes. I started running with bare feet and there were no running shoes. No track suits, no money. In my time if we got even some money we would be counted as professionals. But these days athletes make money. It is not just me but the entire public which criticise the athletes because we are unable to perform at the international level.

MILKHA SINGH : Thanks for the compliments. I have already answered this question earlier on.

maran : mr.singh arjuna award is nations greatest and its a pride of an iandian citizen to have it what made u reject it

MILKHA SINGH : Please do not misunderstand me. I am not going to take this award because this award is not fit for a life time achievment. I have already written to Ms Bharti that after 40 years she thought of giving me this award. I am honoured and grateful to them but this is not the time to give me this award. It would have been alright if I had got this award forty years ago.

Mad : I have respect for U for what you have achieved. But please dont discourage ppl from getting reocognised for thier efforts by saying that awrds are a joke. its the kind of inspiration for the rest of the young ppl who dream making this country proud.

MILKHA SINGH : I am not trying to discourage anyone. Awards should be given but only to the genuine sports persons only. I was only talking about the correctness of the award given to me for my lifetime achievement. After 40 years when I have already have a Padma Shri you cannot give me Arjuna award now lifetime achievment. I am saying that only deserving sportspersons should be given Arjuna awards keeping the interests of the nation in my mind. This would also benefit the upcoming generation.

pankaj : mlikhaji, would you say that overpaid cricketrs are the reason we do not do well in other sports?

MILKHA SINGH : I agree with you hundred per cent. Wherever I go I see children playing cricket. This is a fever. Even the media is projecting cricket. This is the basic reason for our standard falling in other games. We must make it compulsory for all children to participate in athletics, gymnastics and swimming. This gives you a clear idea about the talent of the child. Hundred meter race and long jump must be made necessary for all children at the school level and they should also participate in relay races.

gagan_marathon : sir, do u think india can ever produce a olympic gold meddalist???

MILKHA SINGH : Yes. We have produced four good athletes who have reached in the finals in Olympics in their respective games. Gurbachan Singh Randhwa, 110 meters hurdles in 1964 Olympics at Tokyo. Sriram Singh 800 meters at 1976 Olympic games at Montreal, P T Usha 400 meters hurdles women in 1984 Los Angeles Olympic games and myself in Rome 1960. When they could reach the finals why can't the others. I am sure that there are lot many athletes like us who can do it but it would need hard work to spot them and groom them and give them proper training at one place so that they could get gold medal for the country in Olympics.

punkaj : sir by declining the arujan award do you thingk you will be able to get tyhe justice that is denied to you earlier.

MILKHA SINGH : I cannot say whether I would get justice or not. But what I have done is in the national interest and the interests of the sportsmen or sportwomen who have been doing proud to the nation by winning medals in the international competitions particularly the Olympic/Asian/Commonwealthgames/world cup. They alone should get this award.At this age I do not need Arjuna award. If at all the government wanted to honour me they should have thought of a suitable award as life time achievement. I would request the ministry that they should not come under pressure from any source and give awards to undeserving athletes. The ministry should not feel upset about my suggestions. They should keep sportspersons who have excelled in their games as special invitees on the committee so that they can ensure that only those deserving get the award.

Rk : Are Indian atheletes more suited to a particular are of track and field (perhaps due to their physical makeup)?

MILKHA SINGH : The coaches alone can tell them what kind of game is suited to them. Today we have facilities which can tell us which athlete can do better in what field. This was not available in our times.

Ashish : DO you think that India can create world class Atheletes in the future ;taking into account the present scenario

MILKHA SINGH : I doubt that Indian can produce world class athletes from the present lot. India needs a athletic academy. They have to give responsibility to produce good athletes like in China. The coaches must be held responsible for producing good athletes. They should be kept on contract basis like other countries and remove those who do not deliver goods.

sandipan : sir,what do u think should be done to prevent such wrong things whenpeople who are not at all eligible are given such prestigious awards

MILKHA SINGH : Award should be given by guidlines and the associations should recommed the names. The awards should be limited to just four to five in an year. Only those associations should have the right to recommend awards whose sportspersons perform at the international level. The IOA should look into this aspect. Becuase those who perform at the international level feels humiliated to stand with those who have nothing to their credit. I am not happy with those getting awards who are non-entities in the world of sports. The IOA should screen the names before sending the list to the ministry. They should ensure that only deserving people are recommended for Arjuna Award and not any one and everyone gets it.

MILKHA SINGH : Thanks very much for joining my in this discussions. I hope to see you soon.I hope that this would have the right impact. My best wishes for those who are aspiring for keeping the national flag flying at the international level.We should strive for our national prestige then the monentary gains.