'Before I leave this world, I want one Indian to get that medal' 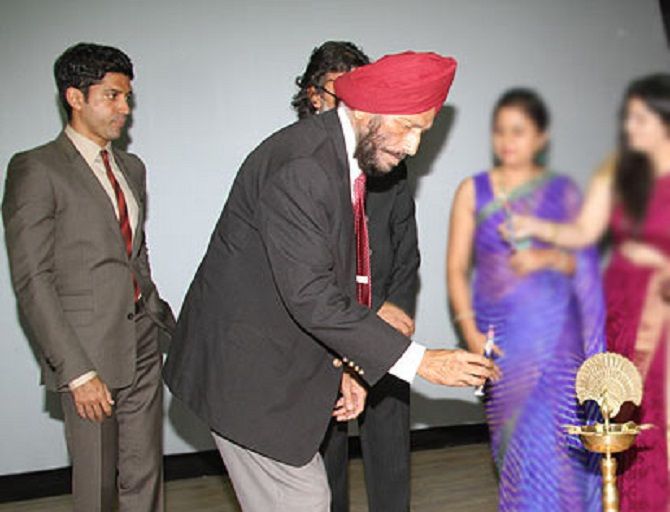 "My phone has not stopped ringing ever since the film released. I am getting hundreds of calls from all over the world. I am on the phone all day receiving congratulatory calls. Badhaai pe badhaai aaye jaa rahi hai."

The most surprising call that Milkha Singh got was from Olympic champion Carl Lewis. "Yes, Carl Lewis called me. He saw my film and was very moved. He couldn't follow the Hindi dialogues, but he saw it with an Indian friend who explained the dialogues to him," Milkha Singhji told Subhash K Jha in a conversation when the film released.

"He is a world-acknowledged runner and has won gold medals in the Olympics. He is one of the greatest sprinters in the world. He wants to send me a gift of appreciation. I told him there was no need for that. I am just too overwhelmed. There are long queues at cinema halls to see my film," the Flying Sikh added.

Ever-generous Milkha Singhji was all praise for the Bhaag Milkha Bhag team.

"The entire credit for the film's success must go to Director Rakeysh Mehra, writer Prasoon Joshi, editor P S Bharathi and to Farhan Akhtar for portraying me with such conviction, and to Divya Dutta for bringing my sister's role alive. And to Viacom 18 for co-producing the film with Rakeysh," the legendary athlete said.

"If it wasn't for the entire team and their belief in the project, my story would not have been told so persuasively. So many athletes have come and gone unsung. I think I am very fortunate."

The fact that Bhaag Milkha Bhag served as an inspiration for India's youth was what was most heartening for Milkha Singhji.

"The message that if you try you can be another Milkha is very strongly put across in the film," he said. "I wanted youngsters to be so moved by my story of struggle that they are inspired into doing something worthwhile. And that's exactly what's happening."

"All those who have seen the film have come out weeping. It's not just sportsmen who are connecting with my story, even businessmen and professionals are... they are getting the message that the only route to success is hard work and willpower."

"When I saw the film for the first time, I couldn't believe they had done such a fine job of putting my life into a three-hour film."

Milkha Singhji was bowled over by Farhan Akhtar's performance. "He is exactly how I wanted to see myself on screen. Full credit to Rakeysh Mehra for seeing me in Farhan. Many actors, including Akshay Kumar, wanted to play Milkha Singh. But the boy (Farhan) has done kamaal. He has replicated me on screen. He even resembles me.: 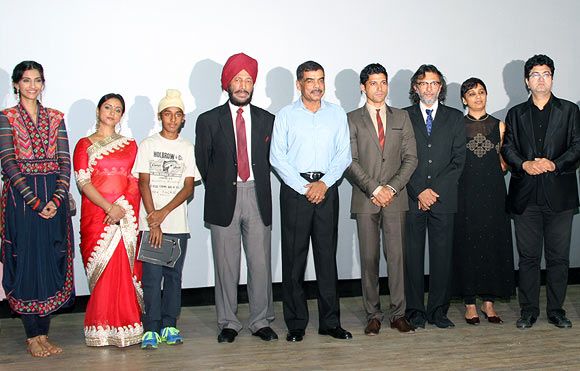 The Asian Games and Commonwealth games champion conceded that the entire story of his life is not represented in Bhaag Milkha Bhaag. "If they had taken all the incidents from my life, the film would have been at least 10 hours long," he said.

Milkha Singhji credited his son ace golfer Jeev Singh for encouraging the project. "I have no idea about movies and the film industry. I haven't seen any film since 1960. My son, who watches a film every day, was impressed by Rakeysh Mehra's Rang De Basanti. Jeev told me if I have to let my story go on film it must be done by Rakeysh Mehra."

"Before Rakeysh, three to four directors had approached me. They even offered me substantial amounts of money, but I opted to let Rakeysh Mehra tell my story."

Milkha Singhji took a token fee of Rs 1 for the rights to make Bhaag Milkha Bhaag based on his life. It was decided that if the film makes profits, some money would go to the Milkha Singh Charity Trust.

"We distribute medicines to the poor, encourage promising athletes and help retired sportsmen. In our country, sportspersons are given no financial succour. I have seen so much poverty and hardship," Milkha Singhji said.

"Believe me, the film shows only 20 percent of my suffering. They couldn't show all my pain. Prasoon Joshi has suggested another film. I've told him to wait and see how far Bhaag Milkha Bhaag goes."

Milkha Singh had one unfulfilled wish. "The gold medal that slipped out of my hand at the Rome Olympics must come to us. Before I leave this world I want one Indian youngster to go get that medal for our country. That's the my last wish."