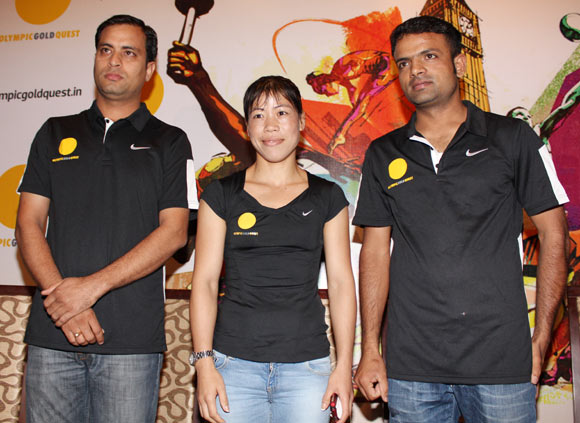 "I will try my best to win a medal at the Olympics," said five-time World champion Mary Kom, who is supported by non-profit organisation Olympic Gold Quest, about her preparations for the Games, where women's boxing is making its debut.

Rifle shooter Rajput and pistol marksman Kumar insisted there will not be any extra pressure on the shooting squad following the feats of Rajyavardhan Singh Rathore and Abhinav Bindra in securing silver and gold at the last two Games respectively.

"We are going to face the same competitors against whom we have competed in the World Cup, Asian Games and Commonwealth Games. There is no extra pressure on us," said 31-year-old Navy shooter Rajput, who finished a distant 26th in the 50m 3-position and prone events at Beijing four years ago. 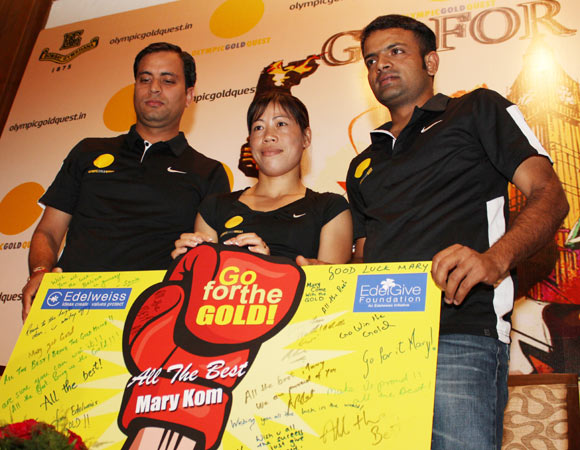 Rajput thanked OGQ, founded by sports legends Prakash Padukone and Geet Sethi, for supporting him from 2010, adding, "Our preparations are going fine."

Kumar said his event, the 25m rapid fire pistol, needs "very good hand-eye co-ordination", for which he has been practising yoga and doing a lot of exercises.

"I will start training in Pune from tomorrow and after a month I will go to Poland for a test event after which I will go to London," he said.

Both the shooters are set to go to Europe ahead of the Games, Rajput for an extended training session (July 5-17) and Kumar to take part in a test event where all the top shooters will take part from July 5-25.

Rajput is scheduled to reach London ten days ahead of the Games, commencing on July 27, while Kumar will reach the Olympic city a day or two prior to the opening ceremony.

Take each match at a time: Prakash Padukone 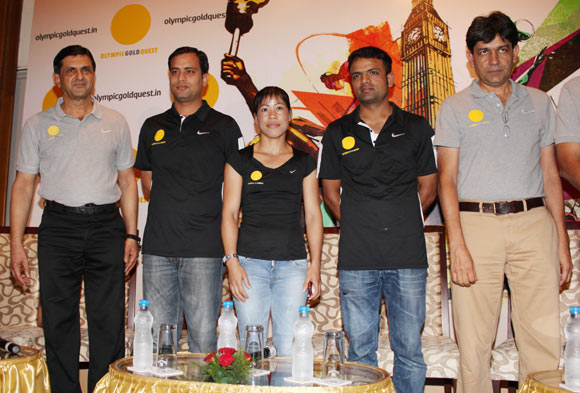 Both had trouble adjusting to the cold conditions prevalent in March, when they took part in competitions earlier this year there, and said they expect warmer conditions during the Games.

Badminton legend Padukone had a word of advice for the three sportspersons who were honoured at the Bombay Gymkhana, saying they should not put additional pressure on themselves by focusing on winning a medal in the Games.

"We are here to celebrate 50 days to the Olympics. They have really worked hard over the last two years and we at the OGQ have supported them. My advice to them would be not to go there with the mindset of winning a medal but take each match at a time. This way they will achieve the result," said the former All England champion.

Ace cueist Sethi said the Indian sporting graph in the Olympic Games has seen a steady rise over the last few editions, particularly since tennis champion Leander Paes broke the jinx of winning an individual medal after more than four decades, at the Atlanta Games in 1996.

"Leander Paes started it in 1996 by winning an individual bronze medal. It was continued by Karnam Malleswari in Sydney in 2000 and then we had Rathore winning the first individual silver in 2004 at Athens, followed by Bindra's gold in Beijing, where we won two other bronze medals," he pointed out.

"We are all hoping the country will win more medals than we secured in 2008. The government has shown intent and the money has started to trickle to the athletes over the last seven years or so. We at the OGQ are only complementing the government and the sports ministry," said the former World billiards champion.

14 OGQ-supported athletes have qualified for the Games 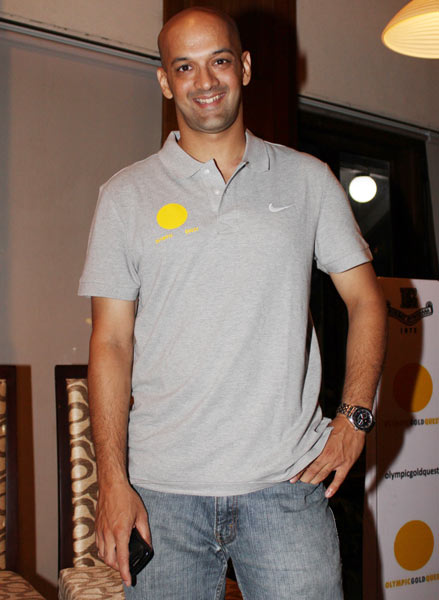 OGQ's CEO and former India hockey captain Viren Rasquinha said 14 sportspersons supported by the foundation have made it to the Games, while two more are expected to qualify later this month, with archers Tarundeep Rai and Rahul Banerjee taking part in qualifiers.

Former national table tennis champion and OGQ director Niraj Bajaj was also present to lend support to the trio who were handed over encouraging placards put together by school children during the function.