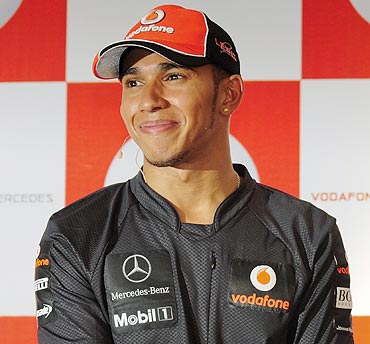 Image: Lewis Hamilton during a news conference in Bangalore on Tuesday
Photographs: Reuters

It was a dream come true for the nearly 10,000 diehard motor racing fans who braved the hot, humid afternoon to watch Hamilton drive his award winning MP-4-23, the car that won him the 2008 Drivers' World Championship.

Some racing buffs even broke the barricade erected on the 500 metre stretch to rush on to the track for a closer look both at the racing star and McLaren F1 car.

The 26 year-old F1 superstar, who currently ranks fifth in the drivers' standings, was in Bangalore on a promotional event ahead of the Indian Grand Prix, scheduled to be held at Greater Noida next month.

'Getting to drive on India's public roads an incredible experience' 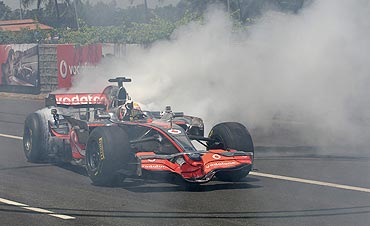 Image: McLaren Formula One driver Lewis Hamilton does a burn-out in an F1 car on an unused section of the Banglore-Mysore highway on Tuesday
Photographs: Reuters

Hamilton kept the audience spellbound with his driving skills and lightning speed.

Some lucky ones even had the privilege of hot laps with Hamilton and also visiting the pit garage to see the technology of the car.

"I've visited India many times over last couple of years and it's never been more exciting to be here than now. The inaugural Indian Grand Prix is only weeks away and you can really feel the growing passion of people and the excitement levels continuing to build," Hamilton said.

"Vodafone has been supporting our team and Formula 1 for many years and they've always brought Grand Prix racing to the people. Getting to drive my Vodafone McLaren Mercedes F1 car on India's public roads today was an incredible experience and I really hope it gave people a taste for the incredible spectacle of Formula 1," he said.

'Indian Grand Prix is going to be a fantastic event' 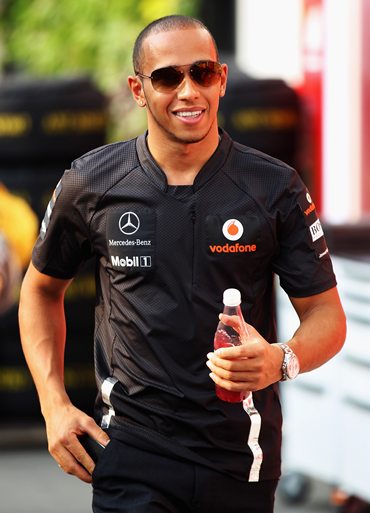 Hamilton also interacted with the finalists of the ongoing 'Vodafone Race to Fame' contest, which allows them a chance to join the Vodafone McLaren Mercedes team during the Indian Grand Prix in Noida on October 30.

"There's no better way to experience F1 than up-close, so I think today's event was a huge success. Next month's Indian Grand Prix is going to be a fantastic event for our sport, but also for the whole Indian nation, who are incredibly passionate about sport. Through Vodafone, I think this is going to be the experience of a lifetime," he said.

The atmosphere at the NICE road on the city outskirts was electrifying to say the least. One felt as if the Grand Prix had come to Bangalore. The road looked like a Formula 1 track complete with grand stand, the pit garage.

One felt as if the Grand Prix had come to Bangalore 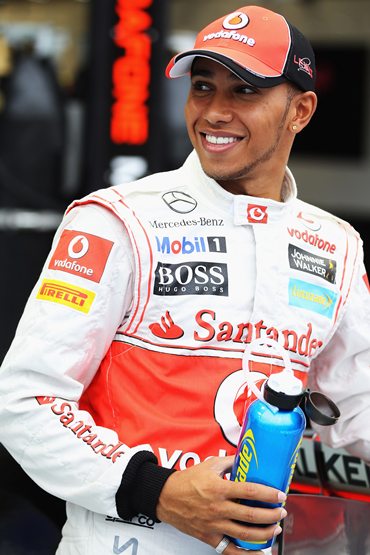 Security personnel had a tough time in controlling the crowd that had gathered to watch the champion, who had earlier participated in Chennai, Mumbai and New Delhi and was in Bangalore for the first time.

Vodafone is the title partner and official mobile partner of the Vodafone McLaren Mercedes team since 2007.

Vodafone had launched the 'Vodafone Race to Fame' to leverage its global association in India.