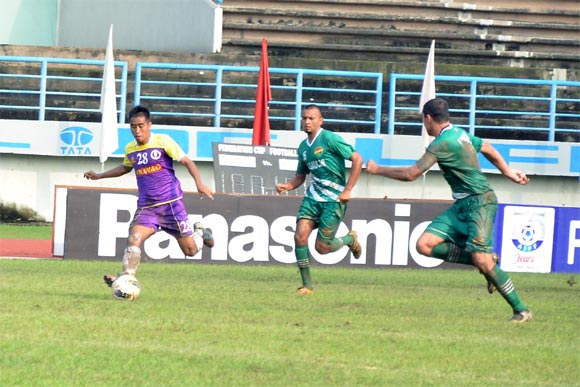 Defending champions Salgaocar SC had to sweat it out for a solitary goal win over Prayag United, Kolkata, while Pune FC defeated United Sikkim by an identical margin in Group D league encounters of the 34th Federation Cup football tournament in Jamshedpur on Thursday.

In an evenly contested match, played at JRD Tata Sports Complex, Salgaocar were under pressure for a major part of the goalless first half but put their act together after the break.

Forward Milagres Gonsalves sent an accurate pass to midfielder Anthony D'Souza, who dribbled past two Prayag United defenders before dodging past goalkeeper Subrata Paul to score in the 64th minute.

Prayag United put up a good fight against a strong team and made some menacing moves initially but were off the target on each occasion.

After receiving a pass from the right flank, Prayag's foreign recruit striker Carlos Gerardo H V sent a powerful right-footer from just outside the 18-metre box but goalkeeper Karanjit Singh brilliantly punched it out. 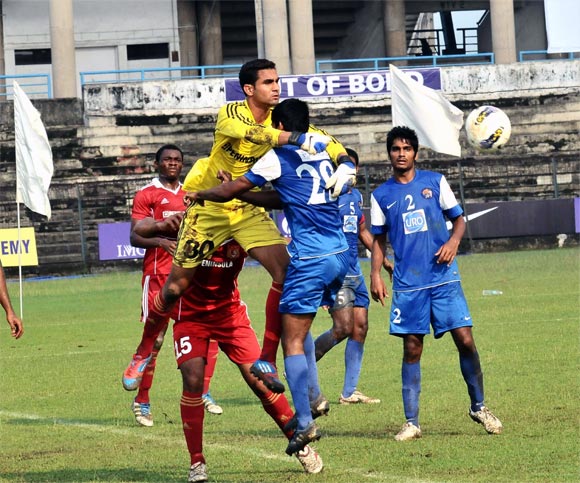 In an another match, at the Keenan Stadium, United Sikkim dominated the proceedings initially but Pune FC bounced back into the match and scored the winner off forward Jeje Lalpekhlua in the 51st minute.

Expressing satisfaction over the performance of United Sikkim, coach Philip de Ridder claimed that the outcome would have been different had Bhaichung Bhutia, who missed the match due to a meeting with the West Bengal sports minister in Kolkata, played today.

"Certainly, we have dominated the proceeding from the kick off but failed to convert the opportunities, apart from the poor ground conditions," he said, expressing hope that Bhutia will play in the next match. 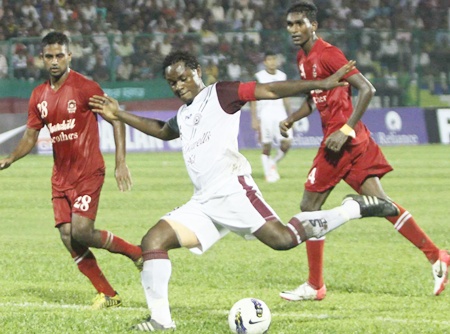 In the second group-B league at Siliguri, Churchill Brother gave Mohun Bagan a lesson in attacking football but the latter managed to escape with a goalless draw.

Mohun Bagan goalkeeper Arindam Bhattacharya made three spectacular saves to keep the scoreline safe. Churchill would also count itself unlucky for being disallowed a goal in the 79th minute –- the only time the Goa giant could beat the Mohun Bagan custodian.

Churchill Brothers worked on fitness and speed and put Mohun Bagan on the mat for the greater part of the first 25 minutes. The action riveted round the fine sense of opportunism showed by Churchill's Nigerian striker Henry Antchouet, who breached the Bagan defence on three occasions.

The first half blitz continued further but the goal failed to mature as both Tomba Singh (Churchill) and Tolgay Ozbey failed to produce the desired finish.

Churchill continued to dominate after the break and found the net in the 79th minute off a Tomba Singh freekick. But referee Santosh Kumar (Kerala) pulled up Churchill Brothers striker Alberto Mendes Silva for infringement and disallowed the goal.