Special: Being No.1 is no 'major' achievement 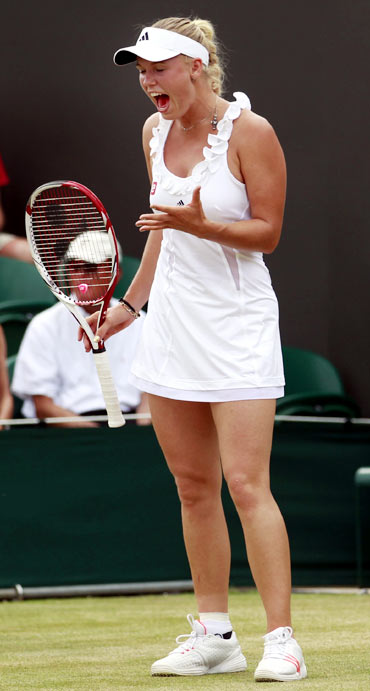 Image: Caroline Wozniacki of Denmark reacts during her match against Dominika Cibulkova of Slovakia at the Wimbledon tennis championships in London
Photographs: Reuters Bikash Mohapatra

Senior Associate Editor Bikash Mohapatra looks at an inglorious club of seven players who have been ranked No. 1 without a major title to their credit.

The world No.1 player yet again failed at a major tournament. A 1-6, 7-6 (7-5), 7-5 defeat at the hands of Slovak Dominika Cibulkova in the fourth round at Wimbledon on Monday meant Wozniacki's wait for a major trophy just got longer.

Wozniacki has now played in 18 Slams. And they have been 18 missed opportunities.

Critics will continue going overboard saying the Dane doesn't have it in her to win a major. Scribes will take more words than usual in analysing the reasons for her repeated failure to lay hands on that elusive big trophy.

And her fans, they are already disappointed.

It's been almost 10 months that the Dane became the world's No.1 women's player, on September 14, 2010. She has held on to her ranking for 38 weeks now and, in all probability, will continue being the top player no matter who wins at the All England Club on Saturday.

And she's been a prolific winner in the period, winning seven titles in 10 finals since assuming the top spot. It is just the major tournaments that continue to elude her.

A third round exit at the clay courts of Roland Garros (French Open) preceded her failure at the grass courts of the All England Club. Sandwiched in between was a title triumph in her native Denmark (WTA Copenhagen Open) on an indoor hard court, of all surfaces.

Coming to London, everything seemed to be going in her favour. She had won five tournaments this season, more than any other player, reached the second week without breaking a sweat and dropped just 12 games in winning her first three matches, the least by any player.

More importantly, her two biggest rivals, the Williams' sisters, who have won a combined nine Wimbledon singles titles, had both been beaten in their respective fourth round matches. Other possible threats, like Li Na, Svetlana Kuznetsova and Vera Zvonareva had also suffered early exits.

Wozniacki raced through the first set, stayed in contention in the second before losing the plot completely towards the end of the third.

It was an opportunity the Dane might never get again. It is a miss she will regret for a long time. But the fact is Wozniacki simply blew up her best chance of a major win thus far.

The Dane might succeed in winning a major in the future, considering she is just 20, rather a fortnight short of her 21st birthday.

But till that happens, Wozniacki will have to endure considerable criticism for being ranked No.1 and yet failing to win a major title.

Rediff.com takes a look at the other players who have been part of the inglorious club.*

* Denotes players who have been ranked No.1 in the Open Era but haven't managed to win a major title in their respective careers

Clijsters was the first female to be ranked No.1 without a major success 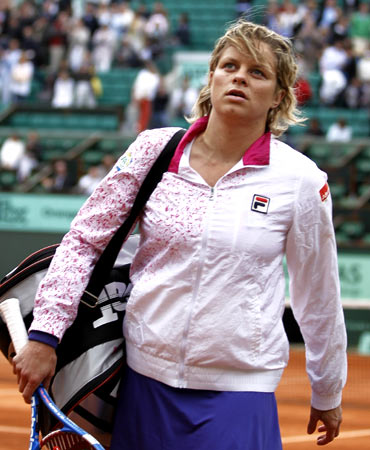 Before you jump the gun, let me clarify that Kim Clijsters became No.1 much before she could win her first major title.

When the Belgian attained the top spot in August 2003, she was a beaten finalist at the French Open twice over in 2001 (to Jennifer Capriati) and 2003 (to Justine Henin). That made her the first female player to be ranked No.1 without having won a Grand Slam singles title.

After attaining the top rank, Clijsters finished runners-up, both at the US Open and the Australian Open (2004), losing both the finals to compatriot Justine Henin.

Clijsters held on to the ranking for 12 non-consecutive weeks before missing much of 2004 and dropping out of the top 100, owing to injury.

She made a comeback in 2005, winning big ticket events in Indian Wells and Miami before embarking on an excellent run after Wimbledon, one that resulted in three title triumphs at Stanford, Los Angeles and Toronto and culminated with her first major title at the US Open, at the expense of Frenchwoman Mary Pierce (6-3, 6-1).

The Belgian has since retired, made a comeback, added three other majors to her kitty (two US Opens and one Australian Open) and regained the No.1 ranking.

Mauresmo was the first French player to achieve the top spot 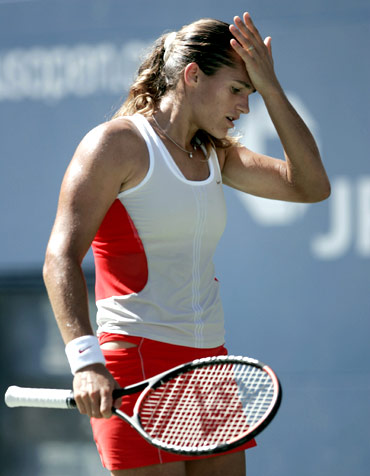 When she attained the No.1 ranking, on 13 September 2004, thereby becoming the first French player ever to do so, the only notable performance she had in a major was a final defeat to Martina Hingis at the Australian Open in 1999.

However, an exceptional 2004, where she won five titles in nine finals, including big ticket events in Rome, Berlin and Montreal, reached at least the last eight stage in all the four majors and won a silver at the Athens Olympics, helped her reach the top, a position she held on to for five weeks.

Mauresmo eventually achieved Grand Slam glory in 2006, winning both the Australian Open and Wimbledon, beating Justine Henin on both occasions.

She also regained her No.1 ranking in March that year.

Jankovic is yet to win a major title 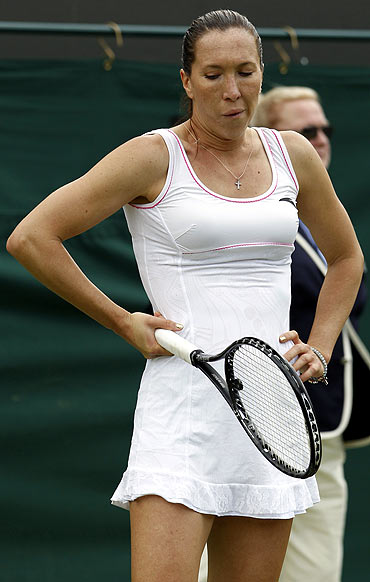 Having missed out on three opportunities to attain the top spot, Jelena Jankovic finally became the No.1 player on August 11, 2008, replacing compatriot Ana Ivanovic.

The Serbian was the 18th woman to attain the top spot and the third to do so without having won a major title.

Her reign lasted only a week. However, a run to the final of the US Open (lost to Serena Williams) followed by successive title triumphs at Beijing, Stuttgart and Moscow, meant Jankovic reclaimed the top ranking and finished the year as the top-ranked player.

On this occasion, the Serbian held on to the ranking for 17 weeks before losing it to Serena at the 2009 Australian Open.

Jankovic has won just three more titles since and dropped to No.15 in the rankings.

She is yet to win a major title. 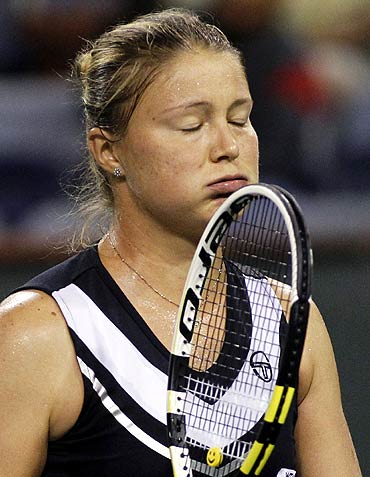 A spectacular 2008 laid the foundation for Dinara Safina.

Safina finished runner-up to Serena Williams at the Australian Open and was also a beaten finalist at Sydney and Stuttgart.

On April 20, 2009, Safina became the second Russian (after Maria Sharapova) and the 19th player ever to attain the No.1 ranking.

Wins at big ticket events in Rome and Madrid followed and she made it to the French Open final for a second straight year falling to compatriot Svetlana Kuznetsova on this occasion.

Safina later lost the top spot to Serena, regained it for a week and eventually was ranked No.1 for 26 weeks overall.

The Russian played in eight finals that year, winning three.

She has done precious little since and has dropped to No. 64 in the rankings. 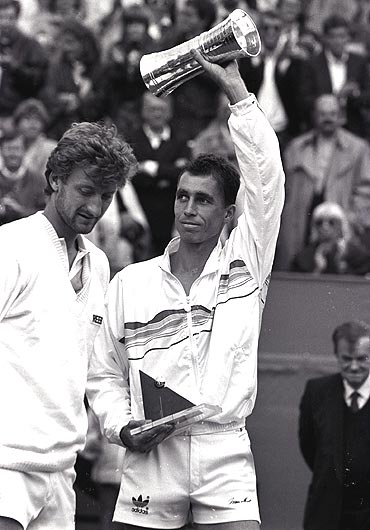 Let's turn our focus on the two men on the list now.

The first name on the list is a bit surprising.

But when Ivan Lendl attained the No.1 rank, on February 28, 1983, he was a long way off from winning his maiden major title.

The Czech won 15 of the 23 tournaments he entered in 1982 and reached the first of his eight successive US Open finals (losing to Jimmy Connors).

In 1983, Lendl won another seven tournaments, besides being the losing finalist at the both the US (losing to Connors again) and the Australian Opens (losing to Mats Wilander).

He held on to the top rank for a combined 17 weeks in 1983 and another nine weeks the following year before he could win his first major title, at the 1984 French Open. His come-from-behind win over John McEnroe in the final helped him regain the top ranking.

The Czech-born naturalized American won a further seven major titles in his illustrious career and held on to the No.1 ranking for a whopping 270 weeks overall.

The lone man to be No.1 but not a major champion 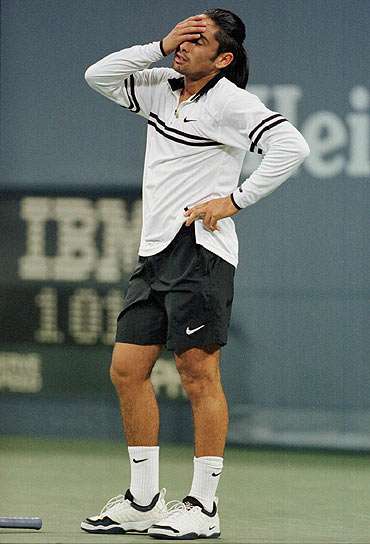 Last but not the least, comes a temperamental Chilean.

Marcelo Rios, on March 30, 1998, became the first Latin American player to attain the top ranking. He held on to the position for six weeks.

In fact, 1998 was a spectacular year for the Chilean. He won seven tournaments, including the big ticket ones at Indian Wells, Miami, Rome and Munich, besides reaching the final of the Australian Open (losing to Czech Petr Korda in straight sets).

Soon after becoming No.1 he fired coach Larry Stefanki. His fortunes nose-dived soon after.

He went on to win six more titles including a big one in Hamburg (1999).

However, major success continued to elude him throughout his career. He retired without one.

Rios remains the only male player in the Open era to have been ranked No. 1 despite never winning a major title!