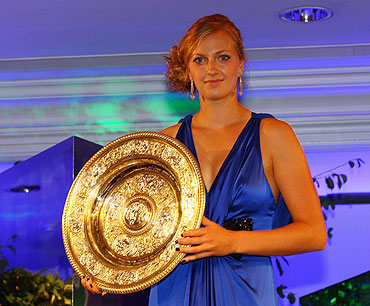 Will winning Wimbledon be a life-changing experience for the Czech Republic's Petra Kvitova? Not if she can help it.

"I'm not thinking of myself as a star. I just want to stay and be normal like I am, hopefully," the shy 21-year-old, who lives in sleepy Fulnek where there are just a handful of tennis courts, said on Saturday.

"Hopefully I'm still the same person. Hopefully there'll be no change in my life."

I'm so tired so I'm sorry if there's something wrong' 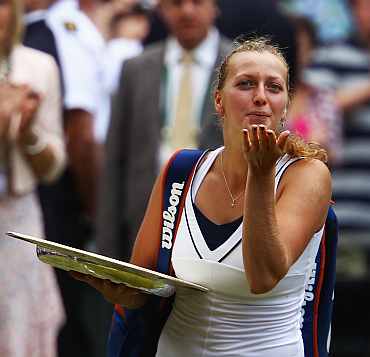 Asked how she felt about all the media attention that will inevitably come her way following the 6-3, 6-4 defeat of Maria Sharapova in Saturday's final, Kvitova just apologised for being weary after a draining two weeks.

"I'm so tired so I'm sorry if there's something wrong," the newest member of the Grand-Slam winners' club said with a smile.

'I did not think I could ever be professional' 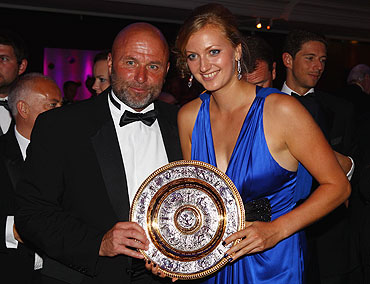 Image: Petra Kvitova holds the replica of the womens trophy as she poses with her coach David Kotyza at the Wimbledon Championships 2011 Winners Ball on Sunday

Russian Sharapova is the world's highest paid sportswoman and is engaged to twice NBA champion Sasha Vujacic. Kvitova's life is a little different.

"Every night I had a pineapple with my fitness coach," she said, beginning to giggle, when asked about her tournament rituals.

Though she struggled with the English language, Kvitova's modesty was clear to comprehend.

"I did not think I could be professional because I was only practising after school for an hour or one-and-a-half hours," said the world number eight and five-times tour winner. 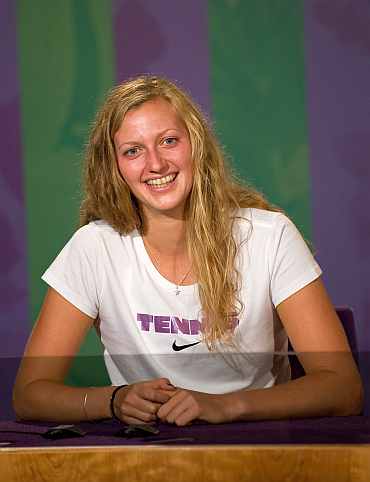 Kvitova is only the fourth left-handed female Grand Slam winner of the Open era. Much will now be expected of the talented Czech whom nine-times Wimbledon champion Martina Navratilova described as "sweet" before the final.

"She's very sweet," the 54-year-old Navratilova told reporters. "It's funny because I haven't had that many players that said 'You're my hero.' It's nice."

Who is Petra Kvitova? 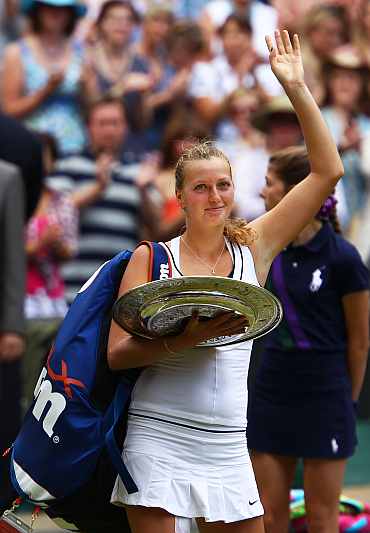 Kvitova was born March 8, 1990 in Bilovec, Czech Republic and was introduced to tennis by her father before turning pro in 2006.

She won her first WTA title at Hobart in 2009 and has so far triumphed four times in 2011, at Brisbane, Paris indoors, Madrid and Wimbledon. 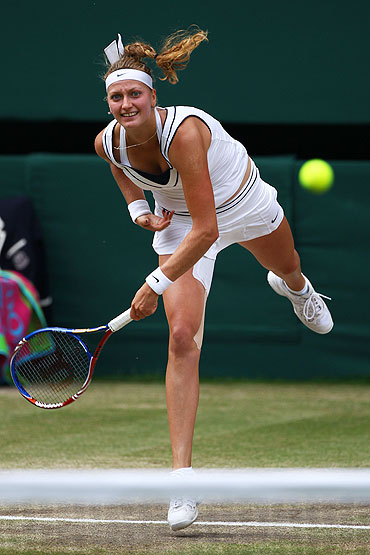 Kvitova reached her first Grand Slam semi-final at Wimbledon in 2010 with a ranking of 62 and having not previously won a match on grass before the tournament.

She became the fourth left-handed player in the Open era to win a Grand Slam title after Martina Navratilova, Ann Jones and Monica Seles.

She is the first Czech in the Wimbledon final since Jana Novotna in 1998.