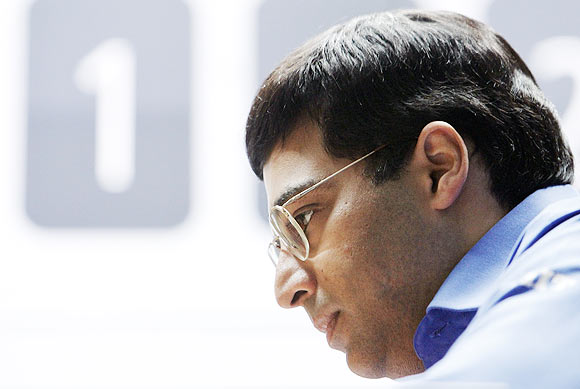 The euphoria has settled down, and World chess champion Viswanathan Anand is relaxing in his home in Chennai.

But what amazes you is that he hasn't changed at all in these years despite winning more laurels. He is still the simple, affable and accessible person though he is, perhaps, the greatest sportsperson India has ever produced.

A relaxed Vishy Anand talks about to Shobha Warrier about life after his recent conquest.

You have won the World championship the fifth time. Is the feeling any different?

Yes and no. The basic feeling is you have met the challenge. Yes, I know I have broken a record but I did not give too much importance to it; the most important thing was to win the championship. You don't think of the implications when you win; you think, it's good that I won!

In the end, you feel happy that you have won. I don't think it's different when you win the first time or the fifth time.

Is your feeling like you are on the top of the Everest for so many years and there is nowhere else to go from there?

I will use the same analogy but in a different way. Each championship is like climbing the Everest and when you are climbing, you want to reach the top. The difference is, you don't expect so many pleasant surprises all the way as you have traversed the way before. The first time you go you notice that there is a rock there, there is a crevice here, there is steep climb here. Everything looks and feels quite new. When you go the fourth or the fifth time, you feel you have seen it before and you have experienced it before.

I think it was more exciting the first time! But once you start climbing, you want to reach the top and that feeling doesn't change.

But when you remain at the top, there is nothing more to gain...

It's not that there is nothing more to gain. What I say is, the details don't surprise you. Every time you climb, you want to reach the top.

'A draw is a possible and a legitimate result in chess' 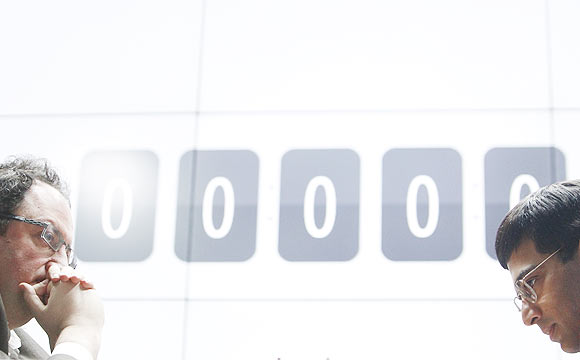 You have been there at the top for so long. How do you sustain the passion for the game?

I try to enjoy chess and I still enjoy my matches. In a way, I look at every challenge as new and try to meet that. When you face the opponent, when you sit on the chair, the feeling is always the same.

Were you more relaxed this time?

I was tense. It is normal that you get tense as you get closer to the match. You relax a little bit only when you start playing. Then, instead of worrying about all the things that can happen, you actually deal with what happens. I was as tense as I was and not particularly more or less.

Even though you had played at that level several times?

Yes. I was not relaxed at all. Even if you have played at that level before, it doesn't help you relax very much.

The championship started with a few draws in the beginning. How did you deal with it?

It meant that every day is the same as if we were starting afresh. It simply meant the scoreline remained the same. But there were exciting battles going on and we were getting information on each other. The thing was to understand how the opponent was preparing and try to develop something against that. So, we were using information on every game.

A draw is a possible and a legitimate result in chess. You don't sit with every result and change anything. The only difference between a draw and a win or a loss is, the win or loss changes the score. And after that, it changes the situation of the match fundamentally. If you win, the opponent has to increase his attention and vice versa. In a draw, the tension remains as you know at any moment, tension can break.

After a draw or a win or a loss, do you have discussions with your Seconds on strategy?

We try not to do too much discussion on strategy after every game. I think it is determined more by colours. When you finish your White, the team will start discussing Black and when you finish Black, the team will start discussing White. So, the focus is very much on the next game. Of course, the score will determine your approach to some degree but you don't need to talk about it; everyone more or less understands the score and we don't repeat it. And, we don't discuss the results; only the next game.

'I didn't really know what to do after winning' What was your feeling when you finally won the championship?

It was funny. At that moment, I moved the Bishop and gave some thought for a couple of second. He then looked at me and we shook hands. He then said, 'congrats'. After that, I could relax for a minute. Then, I heard some clapping in the audience. But I didn't really know what to do. Actually, I didn't even really acknowledge the audience; I was a bit lost in my own thoughts. I just got up and left. Then, I went to the room where Nielsen, Kasimdzhanov and others were waiting. We then congratulated each other. And, slowly the tension started to go.

When did it really dawn on you that you had won again and were champion the fifth time?

It doesn't really happen. What happens after these matches is, you get back to your normal existence soon. When the tension goes, you return to normal. Most of the time, I need to relax again and you don't think of anything else.

How much of your energy gets drained in these championships?

It takes huge amounts of energy. After a match finishes, it takes me 4-5 days just to start sleeping properly again and another couple of weeks to be capable of any work. Usually after a match, for two weeks, you just sit doing nothing. There is no energy to do anything. It takes that much time for your body to unwind itself.

How long is the preparation for a match?

How did you celebrate after the win?

Nothing much. We went out for dinner with the whole team, which is a routine for us. We went to an Indian restaurant in Moscow and we had a lot of dishes. It was a North Indian restaurant but they had some South Indian dishes too. So, we had dosas! In fact, my Polish second ate a lot of dosas!

So, to be honest, there was not much celebration; you try to get back to normal and forget about it.

Is it because you won the championship the fifth time and you are used to winning at the highest level?

No, not at all. Even the first time, there was no energy to celebrate. I think you understand what you have done and happy.

'I don't tend to look back much' 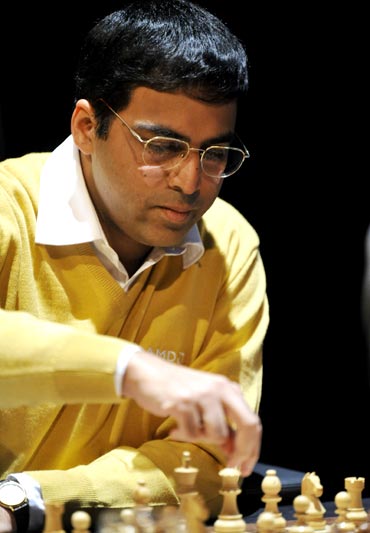 What do you do these days?

I am staying at home. I am not doing anything special. I don't have a tournament right now, only in September. I am just hanging out with my family.

You might not have known this because you had said last time that you didn't read newspapers while a tournament is going on, but [Gary] Kasparov went about saying you would not win the match. Do you think he is jealous of you?

I knew about this, because at press conferences, journalists would ask me very pointed questions. I think he was annoyed that I didn't campaign for him in the elections. He wanted me to campaign but I didn't want to do that. So, I think this was a kind of payback, a kind of revenge. I understood that. But journalists were very happy that they got a sensational story. It was a bit annoying as the topic came up all the time and you had to keep on brushing it away.

Were you not rattled?

It was annoying, but it made me all the more determined to win!

You were living in Spain for many years as all major tournaments are in Europe. Have you shifted residence to Chennai now?

Our principal residence is in Chennai, but still we go to Spain for matches whenever we get a chance.

When you look back at your achievements as a youngster, and later on as an adult, how much do you think you have evolved?

Your game keeps on evolving any way. You can't remain constant if you want to grow. But I don't tend to look back that much. I don't like looking back to see how it was when I was young. I believe only in looking forward.

Once you did look back in an interview to me....

True. At some point, maybe I look back a lot but right now, I like to look forward only.