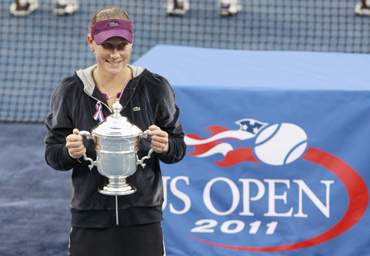 Image: Samantha Stosur of Australia poses with her trophy during the presentation ceremony after defeating Serena Williams in the final
Photographs: Reuters

Australia's Sam Stosur tamed her own pounding heart and repelled everything -- both good and bad -- that Serena Williams hurled at her to win the U.S. Open crown and her first grand slam singles title on Sunday.

The 27-year-old became the first Australian woman in 38 years to win the title when she upset a heavily-fancied but ultimately petulant Williams 6-2 6-3, in an ill-tempered final that could land the American in more trouble.

'I definitely wanted to win today all because of 9/11' 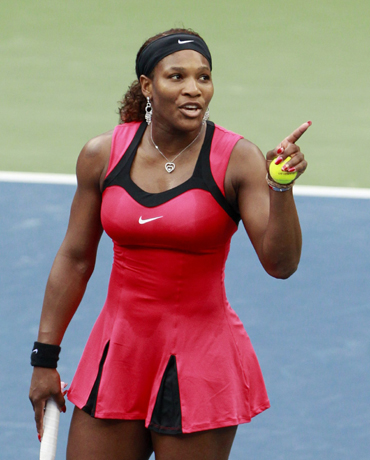 Image: Serena Williams of the U.S. argues with the chair umpire during her match against Samantha Stosur of Australia in the finals at the U.S. Open

Rather than being a memorable American coronation marking the 10th anniversary of the Sept. 11 attacks, instead this final will be remembered for another ugly outburst from the younger of the Williams sisters.

"I definitely wanted to win today all because of 9/11," Williams said. "As the last American left I kinda wanted to do well, but it didn't work out the way I planned."

The three-times champion had been an overwhelming favourite to win Sunday night's showpiece but failed to produce her best on one of the biggest occasions in tennis, then took her frustrations out on the officials, earning a code violation for an outburst reminiscent of her tirade at Flushing Meadows two years ago.

Tournament officials launched an investigation into the incident and said they would hand down their findings on Monday. Williams, who is still under probation for her tirade from 2009, could be suspended if they deem the incident to be a "major offence". 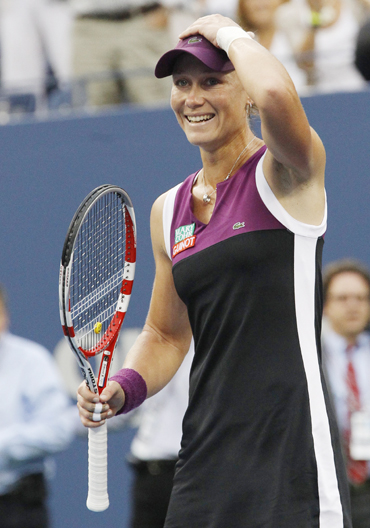 Image: Samantha Stosur of Australia reacts after winning her finals match, defeating Serena Williams of the U.S., at the U.S. Open

Her angry display threatened to overshadow a brilliant performance from Stosur, who played the match of her life to defeat the most formidable player of her generation and capture her first grand slam title, spoiling American hopes of a home-bred champion on the emotional night.

"I had one of my best days and I'm very fortunate that I had it on this stage in New York," Stosur said during an on-court interview.

"Ever since I started playing it was a dream of mine to be here one day. I don't really know what to say. Serena, you are a fantastic player, great champion and have done wonders for our sport."

'It wouldn't have made a difference' 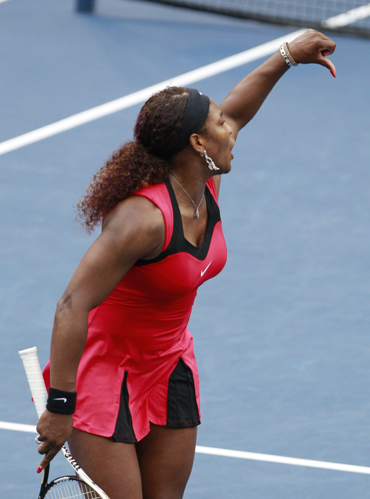 Williams, bidding for a fourth U.S. Open crown, looked tired and ragged from the outset after sailing into the final without dropping a set but her semi-final win over world number one Caroline Wozniacki did not finish until just before midnight on Saturday, about 18 hours before the final.

She let her frustrations boil over and throughout the second set repeatedly argued with the chair umpire, rekindling memories of her ungracious exit from the 2009 U.S. Open.

"If you ever see me walking down the hall, look the other way because you're out of control," Williams said.

Williams was sidelined for almost a year because of health complications after she cut her foot on glass after winning at Wimbledon in 2010 and had been on her best behaviour until she blew up during the second set.

She was docked a point after screaming just as Stosur was about to try and return a shot and then was given a code violation in the next game for yelling at the umpire.

"It wouldn't have made a difference," Williams said about the point she lost.

Stosur remained a model of composure 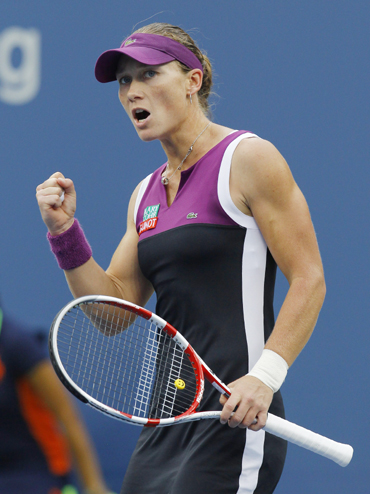 Image: Samantha Stosur of Australia celebrates a point against Serena Williams of the U.S. during their finals match at the U.S. Open

While Williams berated the official, Stosur remained a model of composure. Stosur dominated the match from the start and fully deserved her win, played in front of a raucous Arthur Ashe Stadium crowd.

Stosur, one of the fittest and biggest-hitting players in the women's game, put Williams under pressure from the beginning with some thunderbolt returns that pinned the American behind the baseline and attacked her backhand, forcing her to make errors.

Stosur broke Williams's serve twice in the first set, which she wrapped up in 31 minutes, then three times in the second while losing her own serve once.

"After that first set I kind of sat down and I could feel my heart pounding out of my chest," Stosur said.

'I was definitely the underdog going into it' 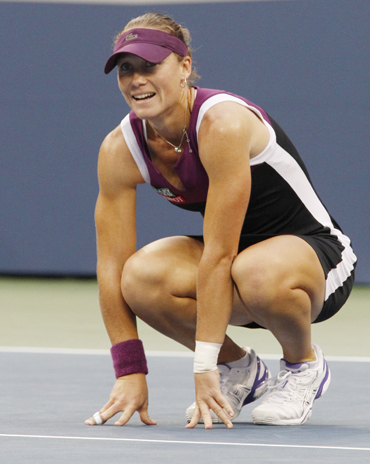 Image: Samantha Stosur of Australia celebrates after winning the final of the U.S. Open

Stosur, who for the early part of her career was better known as a doubles player, emerged as Australia's best prospect in years when she made the final at the French Open last year but lost to Italy's Francesca Schiavone.

"I was definitely the underdog going into it, so maybe that kind of made me a little more relaxed going into this match than especially after my last grand slam final," Stosur said.

"I think I was able to draw on a lot of that experience from the French Open.

"I had to believe I had a chance to win." Image: Serena Williams of the U.S. (L) and Samantha Stosur of Australia chat as they hold their trophies after Stosur defeated Williams to win the final of the U.S. Open

Williams was gracious in defeat and defended herself for berating the umpire, saying she got caught up in the occassion.

"I tried my hardest but she kept hitting winners and there was nothing I could do.