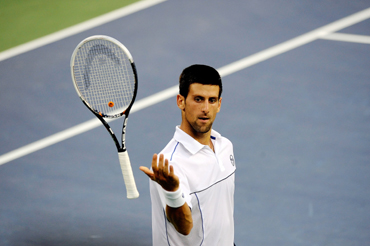 Image: Novak Djokovic of Serbia tosses his racquet as he reacts against Rafael Nadal of Spai
Photographs: Getty Images

Novak Djokovic capped one of tennis's greatest seasons with a awe-inspiring U.S. Open triumph on Monday that could just signal an end to the sport's obsession with "Rafa v Roger" finals.

The 24-year-old Serb broke the pain barrier to beat defending champion Rafa Nadal 6-2, 6-4, 6-7, 6-1 and claim his third grand slam title of the year, underlining that the balance of power in the men's game had well and truly shifted.

Seven-times grand slam winner Mats Wilander said Djokovic was on target for a rush of major title after winning a first in New York and the fourth of his career.

"He's jumped up a level," Wilander told Reuters. "I think this is the very beginning. He may be riding the wave, but it's not like the wave is going to end. This is how good he is."

'I guess it just clicked in my head' 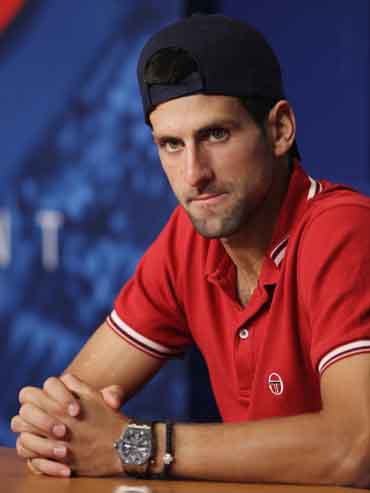 Djokovic struggled with rib pain, lower back pain and cramping and needed a medical timeout and pain killer to carry on in a punishing final but stubbornly refused to yield.

Serbia's Davis Cup hero had also saved match points against Roger Federer in the semi-finals, underlining the steel that has produced an astonishing 64-2 record and 10 titles this year.

"At this level you need those tough matches against top guys," said the Australian Open and Wimbledon champion. "To get confidence that you can really win majors and win the big matches.

"I guess it just clicked in my head. Throughout the last couple of years I didn't change my game in any major way. I think most of the strokes are the same that they were.

"It's just that I'm hitting the shots that I maybe wasn't hitting in the last two, three years now. I'm going for it. I'm more aggressive and I have a different approach to the semi-finals and finals of major events."

'I was always kind of trying to wait for their mistakes' 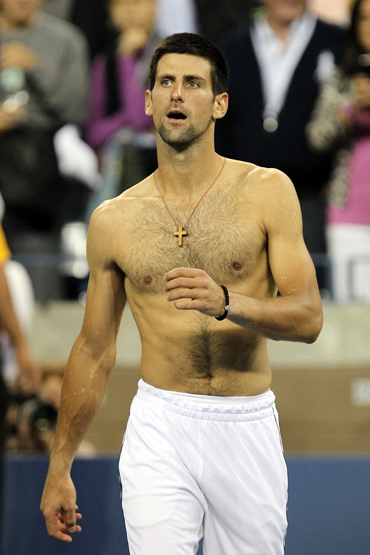 Image: Novak Djokovic of Serbia looks on after he defeated Rafael Nadal of Spain during the Men's Final

Djokovic showed his go-for-broke attitude in surviving his semi-final when, down match point in the fifth set after clawing his way back from two sets down, he ripped an all-or-nothing forehand return across court for a jaw-dropping winner that destroyed Federer's spirit.

"I was always kind of trying to wait for their mistakes," the Serb, who replaced Nadal as world number one earlier this year, said about his attitude in the past.

"Not really having the positive attitude and kind of belief that I can win."

In claiming his third grand slam title of an amazing season, Djokovic produced an incredible display of shotmaking and courage when his body started to wilt during a classic slugfest at Flushing Meadows that lasted four hours and 10 minutes.

'I had to make the points very short' 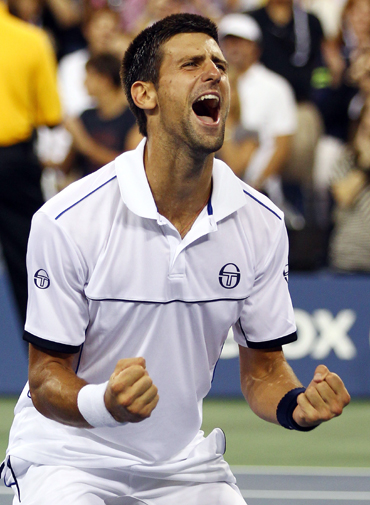 Image: Novak Djokovic of Serbia reacts after he won match point against Rafael Nadal of Spain

Even when his body looked like giving out on him, Djokovic dug deep with a determination and courage normally associated with Nadal himself.

"I had the rib problem and they had to mobilize my back as well and some cramps in the leg," said Djokovic, who had grabbed at his back after several overhand shots and serves.

"I felt the most discomfort and pain with my serve, so I tried to go more for the precision rather than for speed," said the Serb, forced to spin in deliveries at about 90 miles per hour.

"I had to make the points very short, because it's obvious that he is the one that's physically fitter than me on the court today after the third set was done. 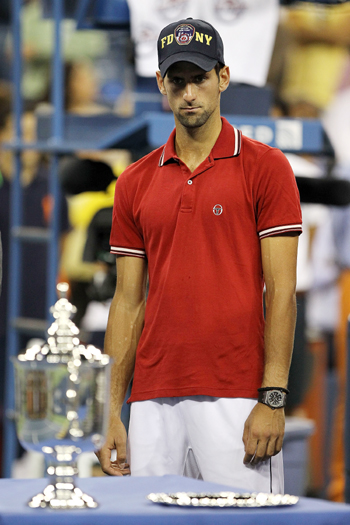 Image: Novak Djokovic of Serbia looks on during the trophy ceremony

The victories have been flowing thick and fast for Djokovic this year. He has won 10 titles this season, including the Australian Open, Wimbledon and the U.S. Open, and no-one seems to know how to beat him, least of all Nadal.

Twelve months ago, the Spaniard was on top of the world after defeating Djokovic in New York to complete his own collection of grand slam titles, but now he can only look on as his rival has replaced him as the top dog in men's tennis.

Djokovic has usurped Nadal as the world number one and beaten him in six finals this year, including at Wimbledon and the U.S. Open.

"Six straight loses, for sure that's painful but I'm going to work every day until that changes," Nadal said.

"So I have a goal. It's going to be tough to change the situation, but the goal is easy to see."

'It's an incredible feeling' 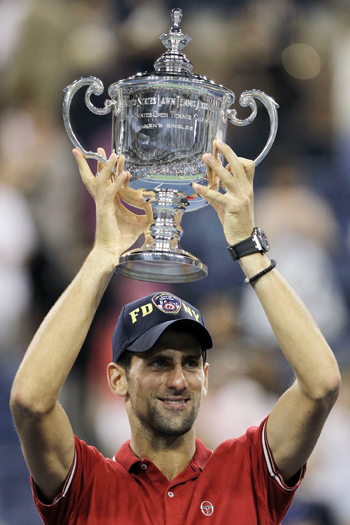 Image: Novak Djokovic of Serbia celebrates with the trophy after he defeated Rafael Nadal of Spain during the Men's Final on Day Fifteen of the 2011 US Open

The win provided Djokovic with his first U.S. Open title after he had twice been beaten in the final, including last year's decider against Nadal, and his third grand slam this year after having won the Australian Open and Wimbledon.

"It really sounds unreal. It's an incredible feeling," Djokovic said.

"I've had an amazing year and it keeps going. Every time I play Rafa, it's a big challenge. I want to congratulate him on a great tournament again and I wish that we have many more tough matches in the upcoming years."

Nadal, who was the undisputed king of tennis 12 months ago when he completed his collection of grand slam titles at Flushing Meadows, was again left searching for answers after a season in which he has lost six finals, including Wimbledon, and the number one ranking to Djokovic.

'I fought until the last point' 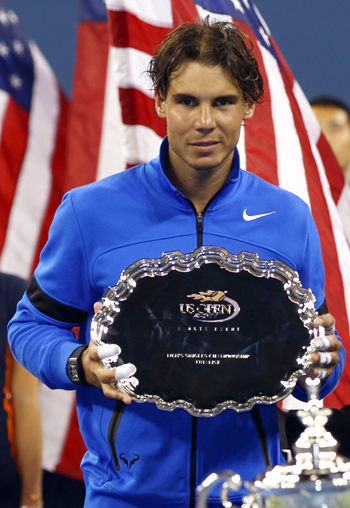 Image: Rafael Nadal of Spain holds up the runner up award

Nadal ran himself to the point of exhaustion against Novak Djokovic then ran out of answers.

The Spaniard knew his best chance of beating Djokovic was to wear him down, so he chased everything he could to keep him on court as long as possible in the hope his Serbian opponent would run out of gas.

Part of his plan worked. Their final lasted four hours and 10 minutes and by the end, Djokovic was gasping for air and feeling his aches and pains.

But so was Nadal. He had run himself ragged by the fourth set and the result was now a foregone conclusion.

He gave it his best shot but it was not good enough. Djokovic won 6-2 6-4 6-7 6-1, leaving Nadal to stand back and applaud as the winner raised the trophy.

"It was a tough match, physically, mentally, everything," Nadal said.

"I fought until the last point. I tried my best at every moment. I am happy with a lot of things, much happier than the previous matches against him."