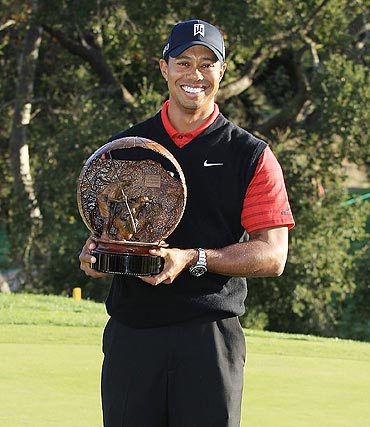 Tiger Woods ended a frustrating victory drought of just over two years when he clinched the Chevron World Challenge which he hosts by one shot on Sunday, holing a six-foot birdie putt at the last.

A stroke behind fellow American Zach Johnson overnight, Woods fired a three-under-par 69 at Sherwood Country Club to claim the 95th tournament win of his career -- but his first since the 2009 Australian Masters.

Woods, whose world ranking plummeted from No 1 to 52nd while he struggled for fitness and form over the last two years with his private life in tatters, came from one shot behind with two holes to play to post a 10-under total of 278.

He drained a 15-footer at the par-three 17th before coolly knocking in a six-footer on the 18th green and then celebrating with a roundhouse sweep through the air with his right arm.

'I know it's been a while, but also for some reason it feels like it hasn't' 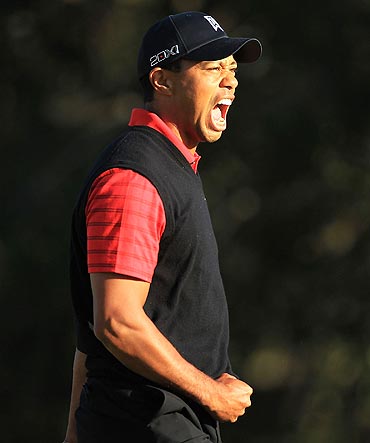 "It feels great to go basically head-to-head against Zach all day," a jubilant Woods said after his spectacular birdie-birdie finish ended a run of 26 tournaments around the world without victory.

"Zach put a lot of pressure on me. He turned the tide (on 16), next thing I am one down playing the last couple of holes. Then I made two good putts."

Asked to describe his feelings after ending his lengthy title drought, 14-times major champion Woods replied: "It feels awesome, whatever that is.

"I know it's been a while, but also for some reason it feels like it hasn't (been a while) because when I was coming down the stretch there I felt so comfortable.

"Was I nervous? Absolutely. I'm always nervous in that position but it's a comfortable feeling, and I enjoy being in that position," added Woods, who will rise to 21st when the new world rankings are issued on Monday. 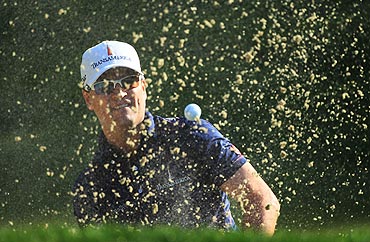 Johnson, seeking his first victory since last year's Colonial Invitational, had to settle for second place in his effective head-to-head with Woods after closing with a 71.

Britain's Paul Casey, who opened with a 79 in Thursday's wind-buffeted opening round, signed off with a 69 to secure third place at five under.

Johnson held a one-stroke lead at the start of a glorious, sun-splashed autumn day at Sherwood and he preserved that advantage when he and Woods each birdied the par-five second.

However, Johnson then bogeyed the next two holes -- missing the green to the left off the tee at the par-three third and failing to reach the green in two at the par-four fourth -- to slip one stroke behind Woods.

Johnson immediately responded with a battling birdie at the par-five fifth.

Johnson and Woods both bogeyed the tricky par-three eighth 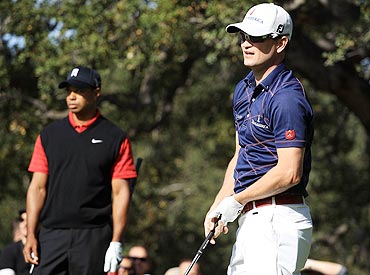 Despite ending up above a fairway bunker with his drive and clipping tree branches with his second shot for the ball to advance only 100 yards, he then struck a sizzling approach to five feet and knocked in the putt to draw level with Woods at eight under.

Johnson and Woods both bogeyed the tricky par-three eighth to slip back to seven under before reaching the turn three ahead of the chasing pack.

Woods edged a stroke in front with a birdie at the par-four 10th, where his approach from the right rough ended up within three feet of the cup.

He picked up another shot at the par-five 11th after reaching the green in two, but then bogeyed the par-three 12th where he found the left greenside bunker off the tee.

'I just came up a little bit short' 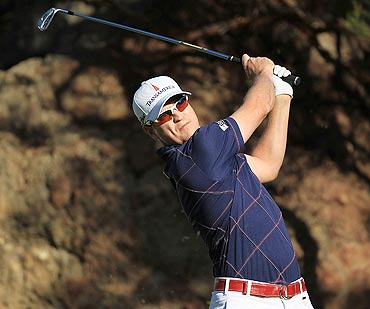 Johnson again caught Woods with a birdie at the par-five 13th, where he got up and down from just short of the green, and the pair stayed level with three holes to play.

Both players laid up at the par-five 16th and Johnson edged a stroke in front after hitting his approach to 12 feet and calmly rolling in the putt.

Woods immediately countered with his 15-foot birdie putt at the 17th before driving his right fist forward in celebration as the watching gallery roared its approval.

That set up the grandstand finish on 18 where Woods triumphed in style after recording his fifth birdie of the day.

"There were certainly a lot of positives out there today, and I can obviously think of a lot of shots I gave away," Johnson said. "I just came up a little bit short.

"I executed well when I needed to, hit good shots when I needed to, and I putted pretty well for the most part. Overall I'm not disappointed in my performance or my approach. I'm just not overly ecstatic about the outcome."