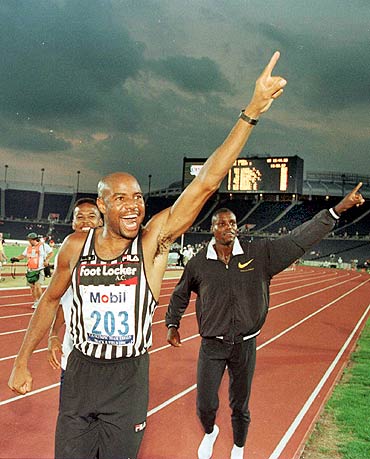 A chance meeting with long jump world record holder Mike Powell earlier this week, coupled with the ongoing Diamond League, inspires Senior Associate Editor Bikash Mohapatra to take a look at athletics records that have withstood the test of time.

Since Mike Powell is the reason why I am writing this, I will start with him.

The American cleared 8.95 metres at the IAAF World Championships in Tokyo (Japan) back in 1991, his effort ensuring his compatriot Bob Beamon's 23-year-old old mark - a jump of 8.90 metres at the Mexico Olympics in 1968 - was finally broken.

There have been many long jumpers thereafter who have won gold medals at major international events since, but none have come anywhere close to Powell's mark.

The man himself couldn't replicate the feat. While he successfully defended his world title in Stuttgart (Germany) two years later, the distance (8.59 metres) was nowhere close to his world mark. 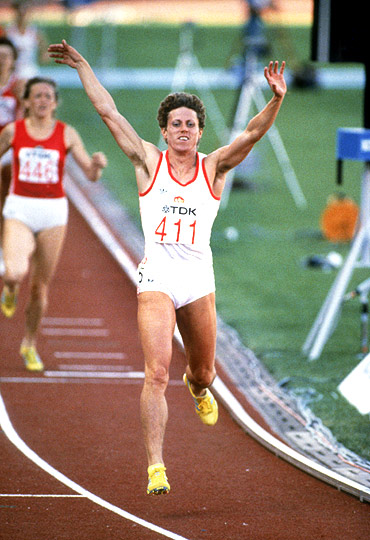 A late bloomer, Jarmila Kratochvilova's first brush with fame came in the Moscow Olympics in 1980 when she won silver in the women's 400 metres.

Three years later, the Czech, then 32, surprisingly broke the 800 metres world record in Munich, with a timing of 1:53:28 seconds.

Her effort helped her eclipse the mark of 1:53:43s set by Nadezhda Olizarenko of the erstwhile Soviet Union at the Moscow Olympics.

At the inaugural World Championships in Helsinki (Finland), she won gold medals in both the 400 metres and the 800 metres, thereby completing a double.

Kratochvilova's 800 metres mark though still stands. In fact on the 26th of this month, it will be 28 years since she achieved the feat. On that day, back in 1986, the German discus thrower achieved the remarkable feat in Neubrandenburg.

His throw of 74.08 metres helped him break the previous mark (2.22m) set by Yuriy Dumchev of the erstwhile Soviet Union.

Schult went on to win the discus throw event at the 1987 World Championships in Rome and the Seoul Olympics in the following year. 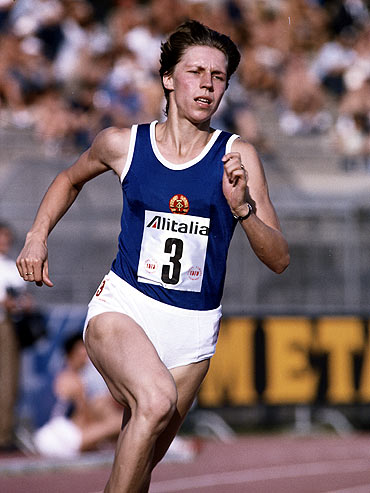 Marita Koch is one of the most decorated athletes of all-time.

Having secured her first major success at the Moscow Olympics in 1980, where she won gold in the women's 400 metres, the German went on to win three gold medals in the inaugural World Championships in Helsinki.

An East German boycott of the Los Angeles Olympics in 1984 denied her a chance to defend her title.

However, on in October 1985, she broke the 400m world record en route to winning the World Cup in Canberra (Australia). 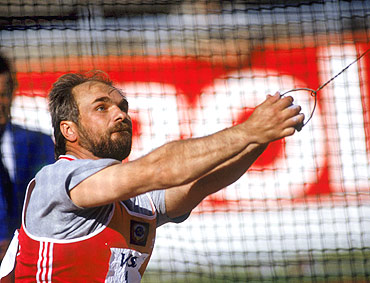 One of the most decorated hammer throwers of all-time, Yuri Sedykh's resume includes gold medals at successive Olympics, in Montreal (1976) and Moscow (1980). and the World Championships in Tokyo (1991).

Sandwiched in between his efforts in the Olympics and the worlds, is his effort at the European Championships in Stuttgart (Germany) in 1986.

His throw of 86.74 metres helped him set a new world record, bettering his own mark (86.66 m) set in Tallinn (Estonia) two months earlier.

In the history of hammer throw, only two other throwers have cleared over 86 meters -- Belarussian Ivan Tikhon (86.73m in Brest) and Sergei Litvinov (86.04m).

Next month will be the 25th anniversary of Sedykh's world record. 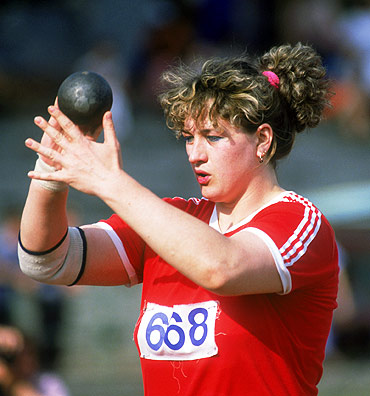 After the husband comes the wife!

Less than a year after future husband Yuri Sedykh broke the hammer throw record, a mark that still stands, Natalya Lisovskaya did the same in the women's shot put.

Lisovskaya went on to win the gold medal at the World Championships (in Rome) that year and at the Seoul Olympics the following year.

Twenty-four years later, her record (like her husband's) remains unbroken. 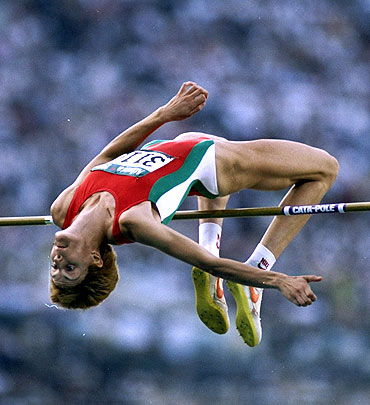 It's been 25 years now that Stefka Kostadinova has held the women's high jump world record.

And in the 1987 World Championships in Rome, the Bulgarian cleared 2.09 metres en route to winning the gold. That marks stands as the world record in the discipline.

Kostadinova went on to win the world title for a second time in Gothenburg (Sweden) in 1995 before claiming her first and only Olympic gold medal in Atlanta a year later. 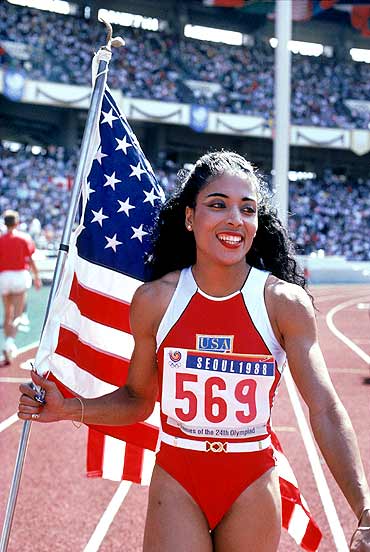 Twenty-three years on, both the records remain intact.

And even 13 years after her death (of epilepsy), Florence Griffith-Joyner remains the fastest woman ever.

Chistyakova has a world record, but no major title 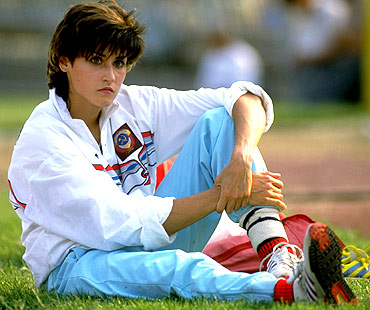 If the men's long jump world record (Mike Powell's) has remained unbroken in almost 20 years, the women's equivalent has been intact even longer.

When Galina Chistyakova of the erstwhile Soviet Union cleared a distance of 7.52 metres in an athletic meet in Leningrad (now St Petersburg) in 1988, she broke American Jackie Joyner-Kersee's mark (7.45 metres), set in Dresden (Germany) a year earlier.

Chistyakova could only manage a bronze medal in the Seoul Olympics a few months later, when Joyner-Kersee won comfortably.

In fact, she could never win either an Olympic or world title.

Her world record though remains untouched. 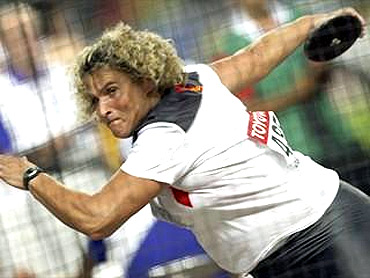 It was at Neubrandenburg again.

Two years after her compatriot Jugen Schult had set the men's discus throw at this medieval German city, Gabriele Reinsch set a new world record in the women's event with a throw of 76.80 meters.

Reinsch had an otherwise insignificant career. 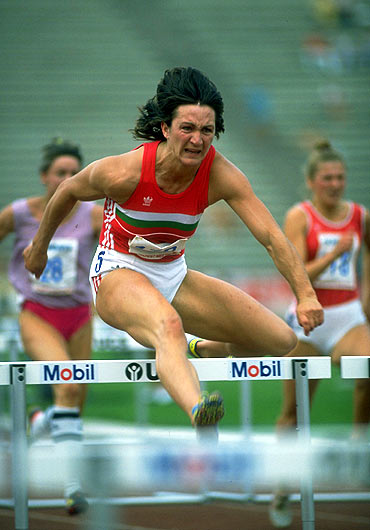 However, the following year compatriot Ginka Zagorcheva, who went on to win the event in the World Championships in Rome, usurped the mark by completing in 12.25 secs.

At Stara Zagora in 1988 though, Donkova had her revenge, completing the distance in a new record of 12.21 secs. It was her fifth world mark overall.

The Bulgarian went on to win the gold medal at the Seoul Olympics later that year. And that remained the highlight of her career.

Besides, her record still stands.

Jackie Joyner-Kersee: the greatest heptathlete ever 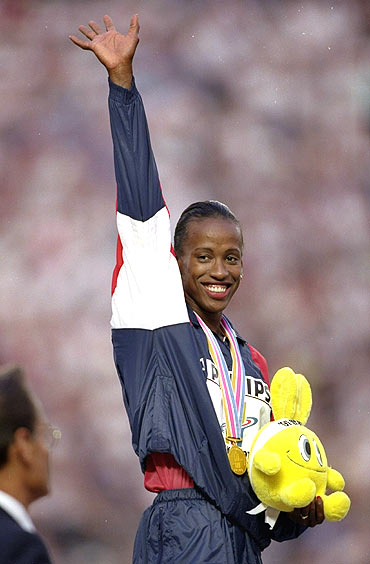 Arguably the greatest heptathlete ever, Jackie Joyner-Kersee won the Olympic gold medal in the event twice in succession, in Seoul (1988) and Barcelona (1992).

Her total of 7,291 points en route to the gold in Seoul remains a world record in the event. 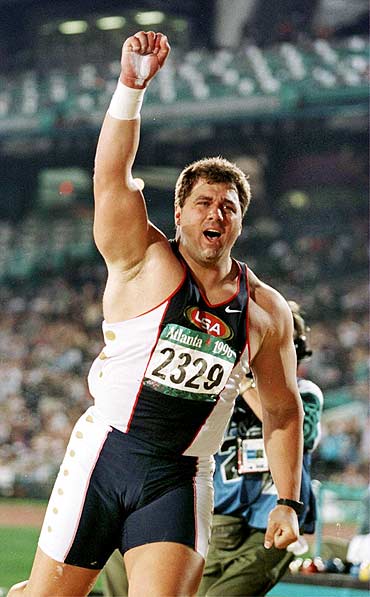 Randy Barnes was no match to Ulf Timmermann in the men's shot put final in the Seoul Olympics in 1988.

While the German, who had set the world record (23.06 metres) earlier in the year in Chania (Greece), won comfortably with a throw of 22.47 metres, the American had to settle for the silver (with 22.39 metres).

Two years later though, Barnes broke Timmermann's record with a throw of 23.12 metres in Los Angeles.

Three months later, he tested positive and was banned for more than two years, thereby failing to participate in the Barcelona Olympics.

Barnes returned to win gold in style in the Atlanta Olympics (1996) with a throw of 21.62 metres. He tested positive again in 1998 and was banned for life.

His world record remains intact though. 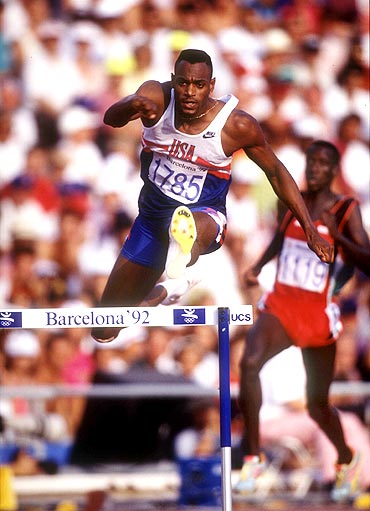 It was a double whammy, so to speak.

When Kevin Young ran the 400 metres hurdles in 46.78 seconds at the Barcelona Olympics in 1992, it ensured him both the gold medal and the world record.

Young's compatriot Edwin Moses had held the record for 16 years between 1976 and 1992, bettering it three times in the process

Young, who went on to win the world title in the discipline in Stuttgart a year later, has now held the record for 19 uninterrupted years.

Wang Junxia was a success story 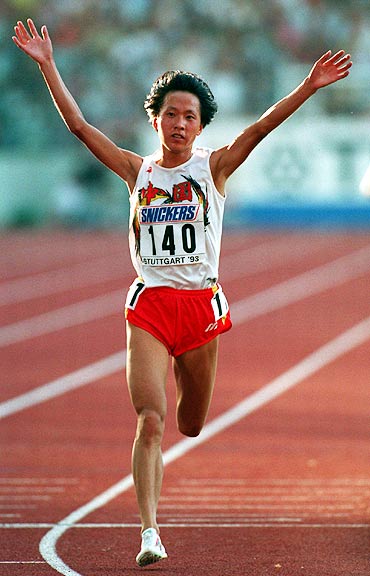 Wang Junxia surprised one and all in August 1993 when she won the women's 10,000 metres at the World Championships in Stuttgart.

In fact, in that particular edition, Wang and other Chinese long distance runners under the tutelage of infamous coach Ma Junren, swept everything in front of them.

A month later, at the Chinese National Games, she broke the world record in both the 3,000 metres (the event has become defunct since) as well as the 10,000 metres.

Her timing of 29:31.78s in the latter helped her eclipse the earlier mark (30:13.74s) held by former world champion Ingrid Kristiansen of Norway.

Javier Sotomayor has held the high jump record for 23 years 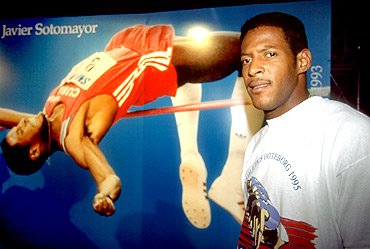 When Javier Sotomayor cleared 2.43 metres in Salamanca (Spain) in September 1988, he broke the existing high jump record by Swede Patrick Sjoberg by a metre.

The Cuban bettered the feat in July 1989 by clearing a height of 2.44 metres in San Juan.

And four years later, again in Salamanca, Sotomayor, by then an Olympic champion, cleared 2.45 metres.

The above mark remains untouched after 18 years.

Sotomayor went on to win the high jump world title twice in Stuttgart (Germany) and Athens (1997). 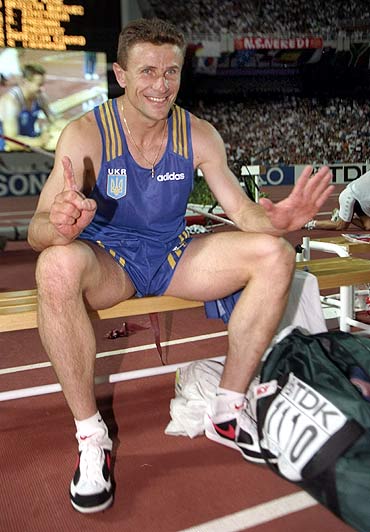 And, save for one, when he reclaimed it from Frenchman Thierry Vigneron, the rest were just about bettering his own effort.

His final clearance, 6.14 metres (more than 20 feet) achieved in Sestriere (Italy), remains the world mark for the discipline.

Besides breaking world records, Bubka also claimed a record six world titles and also won the gold medal at the Seoul Olympics in 1988.

Inessa Kravets made a perfect comeback 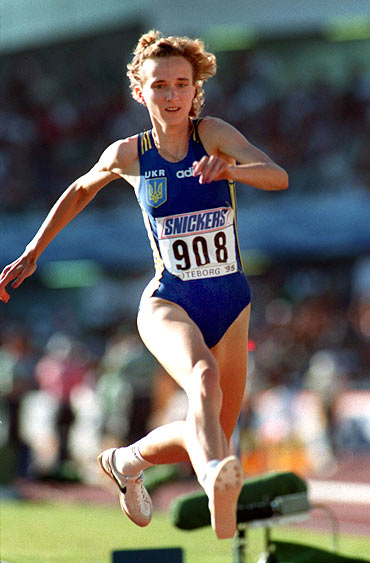 When Inessa Kravets cleared a distance of 15.50 metres at the World Championships in Gothenburg (Sweden) in 1995, she had broken the existing triple jump world record by quite a distance.

It was a perfect comeback for the Ukrainian, banned for three months in 1993 for use of stimulants.

Besides winning the triple jump title in Gothenburg, Kravets also repeated the feat at the Atlanta Olympics a year later. 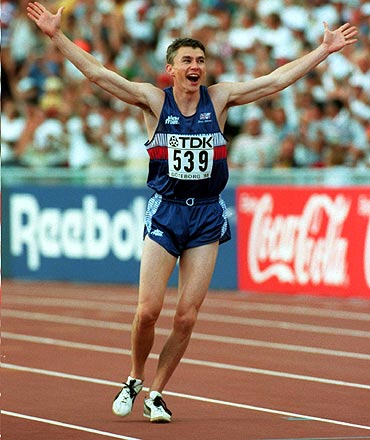 Jonathan Edwards's feat was a historic one.

At the World Championships in Gothenburg (Sweden) in 1995, the Briton broke the world triple jump record twice during the event.

His first jump made him the first to break the 18-metre barrier (18.16 metres). And less than half an hour later, Edwards jumped 18.29 metres (60 feet) to claim the world title.

The record remains untouched even after 16 years.

Edwards went on to win the triple jump gold medal at the Sydney Olympics in 2000 before claiming a second world title in Edmonton (Canada) a year later. 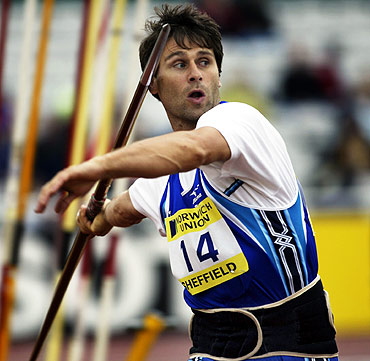 Zelezny retained and lost his record in the same month (July 1990) but those marks were erased after the IAAF banned the serrated tails in 1991.

However, in 1993 Zelezny regained his record with a throw of 95.54 metres in Pietersburg (South Africa).

The Czech broke his own record on two occasions, the last of which, a distance of 98.48 metres achieved in Jena (Germany) in May 1996 remains the best javelin effort yet. 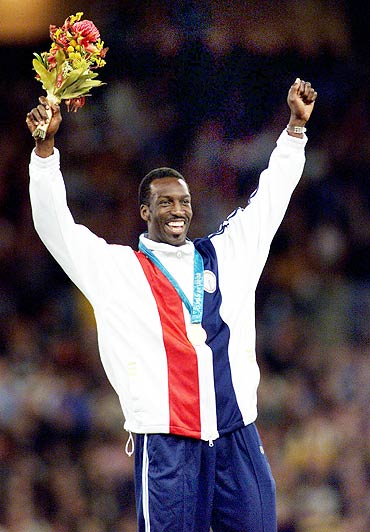 It took him 11 years but legendary American athlete Michael Johnson did break his compatriot Butch Reynolds' world record in the 400 metres.

Johnson, who won four Olympic gold medals and eight World championships golds, also held the 200 metres (between 1996 and 2008) before Jamaican Usain Bolt bested it at the Beijing Olympics.

Bolt went on to improve his effort in Berlin a month later. 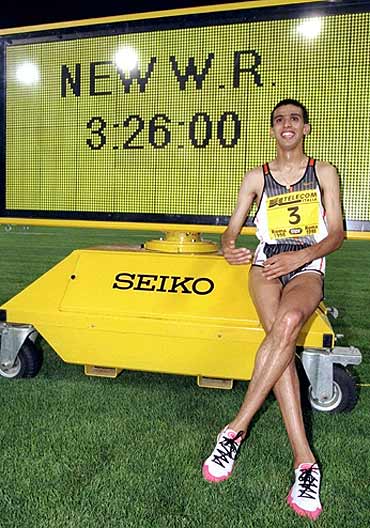 Hicham El Guerrouj is also referred to as the 'King of the Mile.'

The Moroccan is one of the best middle distance runners ever, having two Olympic and four World championships gold medals to show for his efforts.

In 1997, El Guerrouj became the first athlete to beat the legendary Noureddine Morceli over 1500 metres in four years.

The record has not been touched in 14 years.

Sebrle is the first decathlete to top 9, 000 points 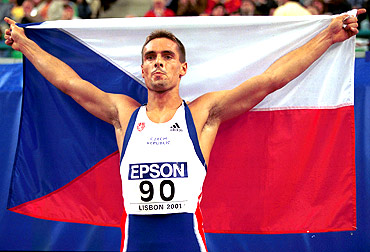 A decathlete par excellence, Roman Sebrle achieved a first when he broke the world record in the discipline in Gotzis (Austria) in May 2001.

The Czech became the first decathlete to top 9,000 points.

Thereafter, Sebrle went on to win the decathlon gold medal at the Athens Olympics in 2004 before repeating the feat at the 2007 World Championships in Osaka (Japan).