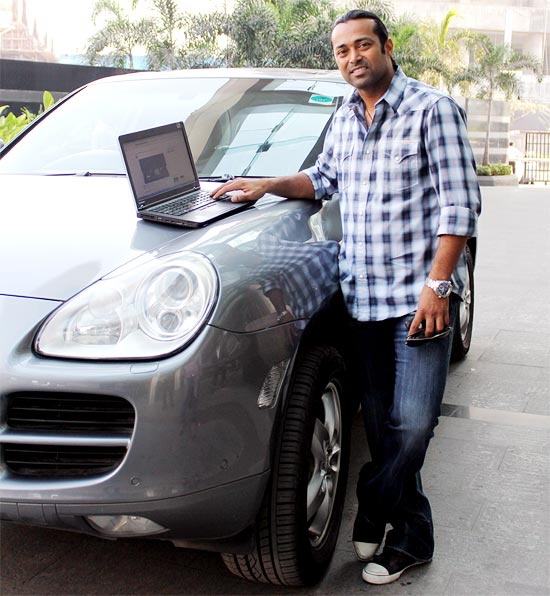 India's tennis legend Leander Paes is gearing up for a new challenge in life as he gets set for his debut in Bollywood.

Paes, who has won 13 Grand Slam titles, will make his foray into movies with Rajdhani Express, a socio-political drama, which releases on January 4, 2013.

Paes potrays the role of Keshav in the movie, which also stars Jimmy Shergill, Gulshan Grover , Mukesh Rishi and Sayali Bhagat among others.

Paes, 39, has been the flagbearer of Indian tennis for more than two decades having taken part in six Olympic Games , which included the bronze medal in singles at the 1996 Atlanta Olympic Games.

He revealed that he always had interest in acting in movies and there are a few more movie projects in the pipeline now.

The tennis superstar connected with Rediff readers on Thursday, and chatted in details about his upcoming movie.

Transcript of the chat:

Leeladhar: How long is your movie? More comfortable on the court or in the studio?

The movie is 2 hours and 3 minutes because in this genre a drama thriller I like to make a hard impact in a short amount of time. I realise every story has its own journey and the journey of Keshav and Rajdhani Express is a short hard impact story.

Subhash: What made you to act in the movie?

The first movie I wanted to do needed to be completely different that Leander the person and personality. Keshav's story in the journey of Rajdhani Express was very difficult for me because his character was different from Leander the person. I have never been to acting school; I selflessly trusted Ashok Kohli my director, his guidance and followed his direction every step of the way.

Himanshu: Sir, just need one liner ... WHO IS KESHAV?

Keshav is the David in the David and Goliath story...Aam Aadmi (common man)...he is one of you!

'I have been developing a documentary on my life' 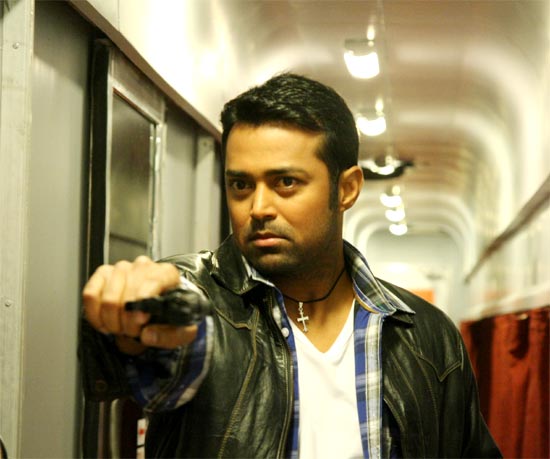 Jinny: Will tennis take a back seat now?

At the moment Iam juggling both being a world class athlete and learning films but down the track if you'll enjoy my acting ability only then I would look to replace my tennis with films.

Leeladhar: I heard u have been one Hollywood movie. That's good news. Tell me more about it.

Right now focussing on Rajdhani Express and yes I have a Hollywood script on my table. Do you guys feel that I should venture to Hollywood straight?

J Gaur: Do you plan to work in a movie where you play your real life character?

For the last year, I have been developing a documentary on my life and since my name means the man with the lion heart the script is in work.

'I don't have to do films for the fame or money' 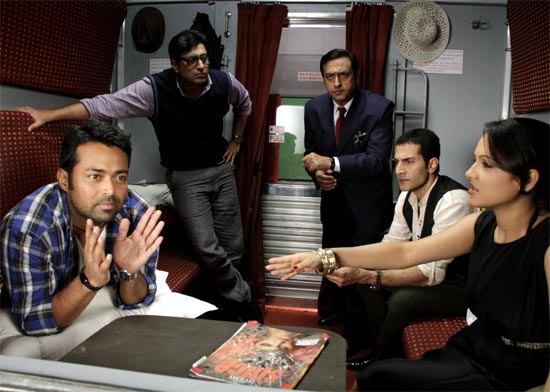 Atanu: hii dada,i am biggest fan of you. Which film and when it will be released?

Thank u so much for the motivation and support. Rajdhani Express releases on January 4th, bring all ur family and friends to watch it. You have never seen Leander in this role before.

I would love to have your feedback please message me on www.twitter.com/paesofficial and Facebook page https://www.facebook.com/LeanderPaesOfficial

Ashok: I think you are true patriotic?? Even your aggression shows when you are playing tennis???

You are gonna see some of that aggression in Keshav as well. :)

Thanks for the advice. I am lucky I don't have to do films for the fame or money but I am actually in it for the creativity of story telling.

'I am looking forward to my own home production' 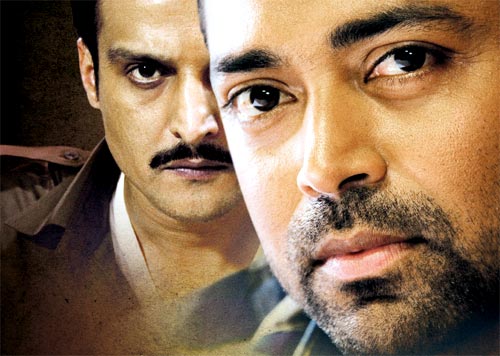 Vineeth Pillai: Did Someone ever told u that u resemble Salman Khan?

Thanks for the compliment. I think Salman Khan is awesome and love the way he's created his brand name. Salim Khan Saheb to me is one of the greatest story tellers in the business and I have watched his movie Sholay 105 times.

Sabyasachi: You think u can add value to Bollywood?

I believe I can make a difference in the way that I tell stories and I am looking forward to my own home production.

I have 3 movies on the card, 1 Hollywood 1 Bollywood and a graphic novel which is releasing in the summer of 2013.

'My role of Keshav was a lot of hard work' 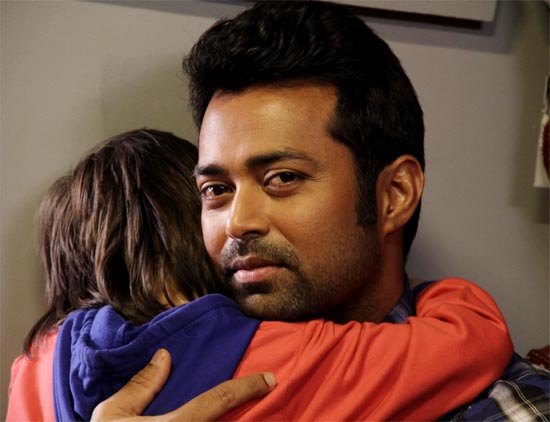 Pankaj: Why didn't u start with a big banner movie? Why a serious movie to start with?

I would never ask my friends for favours, I would rather earn my respect just as I have through my whole career with tennis. I would like the big directors and producers to appreciate my acting and my story telling and then approach me as I am open to any genre of film.

Leeladhar: You are a champion. All the best for ur movie. wats ur future plans? Movie or tennis?

At this moment I am juggling both professions. I love playing both for you and the national flag and keep winning Grand Slams for you. My aspirations and dreams as an actor is that I look forward to entertaining you with films for the next decade.

Vaibhav: What made you to come in the line of movies? Is this your second inning plan?

This movie was a very hard hitting drama thriller and my role of Keshav was a lot of hard work as it is so different from my own personality. The music is great. Especially "Koi Umeed" the150-year-old lyrics by Mirza Ghalibji are so pertinent in modern life.

Sonil D: You were first offered a film in 1996. Why did you not take it up. What took you so long to do a film?

I think every thing has its time and place and in 1996 when I was offered that movie it was days after I had won the Olympic medal. I still had many aspirations as a tennis player. Now that I've achieved everything there is to achieve as tennis player I think now is the right time to venture into my acting dreams! Also I believe all of you are ready to celebrate multi-talented entertainers in India

Vineeth Pillai: Cricketers like Jadeja, Kambli & Ankola tried their luck in films but didn't worked out, r u confident abt ur venture

That's part of the challenge and as you'll have known me through my tennis career I've always enjoyed taking up a challenge!

'I chose to be a modern role model' 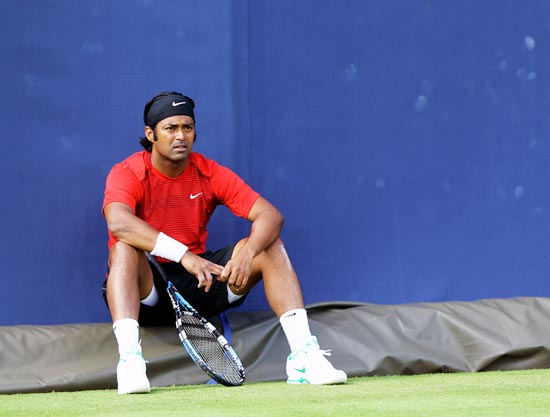 Abhishek: French open mixed doubles is the only grand slam that eludes you any plans to win a career slam in 2013?

God willing 2013 will see me complete my 2nd career Grand Slam in mixed doubles as well.

Archan: How and what are the plans of your family in preserving the rich legacy of Micheal Madhusudhan Dutt,

My great great grandfather is one of the reasons I am attracted to the art. He was a rebel poet in his time. I chose to be a modern role model to prove that with a lot of hard work and belief in urself you can achieve excellence in anything!

Andy: Have u met the tiger of Bollywood and learn the acting lessons?

I am very blessed to have many wonderful friendships all over the world and I choose to learn from all my people. 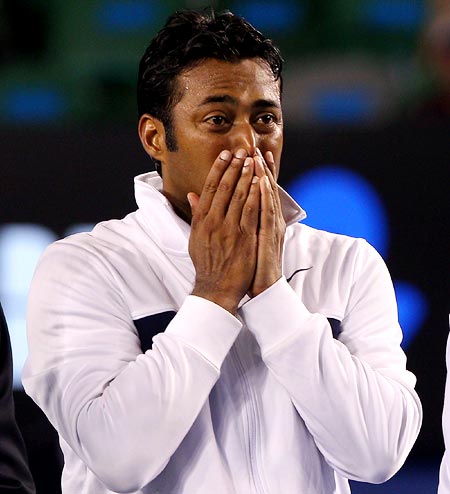 SB: DO JUSTICE TO FILM AS LIKE YOUR TENNIS, BUT DO NOT LEAVE ANY FORM OF TENNIS

Thanks for the advice, looking forward to entertaining you in both in the next few years!

Vineeth Pillai: U have been involved in controversies... does ur name inspire u to face them strongly as u did??

Obstacles are unavoidable in ur life. It's how u deal with them that makes the difference in ur own character & how people perceive u. The journey of life & towards excellence is a long road & how we conduct ourselves thru adversity is the essence of our own expression

Alex: Who is ur best actor u follow always?

I learn from every actor just as I've learnt from so many athletes...I am a student of life, athelitism and films.

Ashok: Any plans in future to do the regional movies Tamil,Telugu etc

Open-minded if it is a great script. Lived in the South in my formative years, I love Rajni Sir! :)

'I am very proud of my roots' 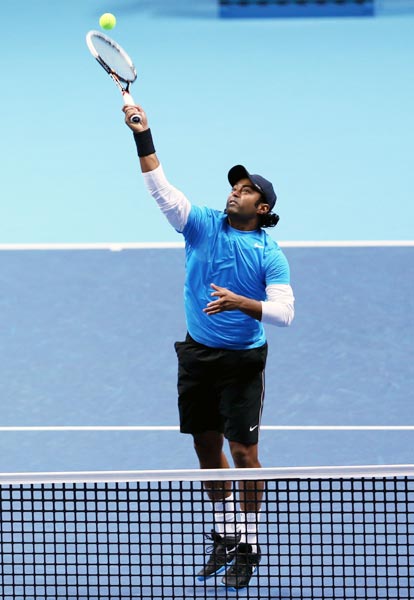 Rajasekhar: I hv a heartly very closest feelings for you as a person and i like ur winning attitude

The greatest joy for me is to entertain my family, friends and all my fans. And to be able to do this globally through my tennis and films.

Abhishek: As a Calcuttan, I take pride to be from your city. "Olympic Gold Quest" - are you still associated with this?

Archan: Does your family still stay in Park Circus? Please share some your childhood memories there.

The journey of my life as athletes and as an entertainer has taken me all around the world. No matter how far my travels have taken me I am very proud of my roots!

Archan: Apart from Mahesh Bhupathi, whom do you regard as your best doubles partner? Lucas? Martin? Radek? David? Nenad?

I've had some great partners. Martina and Radek being two of the best!