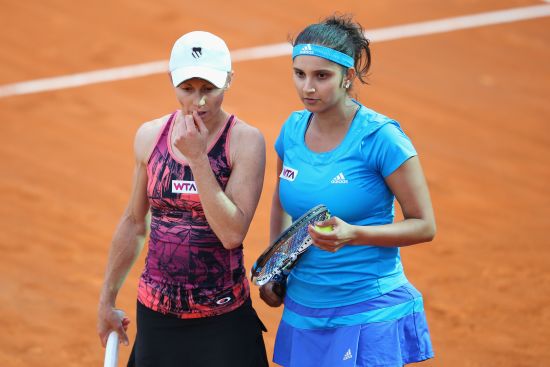 Fifth seeds Sania and Cara were clinical in their 6-3, 6-3 win over the Serbian-Russian combo in the third round of the clay court Grand Slam.

However, they are now up against the top seeded pair of Su-Wei Hsieh from Taipei and China's Shuai Peng, to whom they have already lost twice this season.

Sania and Cara had ended runners-up to Su-Wei and Shuai at Indian Wells and again lost to them in the quarterfinals of the Madrid event.

At the Australian Open also Sania and Cara had lost in the quarter-finals when they lost to top seeds Sara Errani and Roberta Vinci.

Bopanna and his partner Katarina Srebotnik, seeded second, frittered away a good start to lose the mixed doubles quarter-finals 6-2, 4-6, 5-10 to eight seeds Julia Goerges from Germany and Serbia's Nenad Zimonjic.

Bopanna had made a second round exit from the men's doubles event with Aisam-ul-haq Qureshi. Jeev Milkha Singh dropped just one bogey on the back nine against three birdies on the front for a card of 70 in third round, which saw him rise to tied 46th at the Nordea Masters in Malmo, Sweden on Sunday.

He had made the cut on the line.

Shiv Kapur endured a painful triple bogey on par-4 ninth, where he had a double on first day, as he struggled to a 72 that saw him drop to tied 53rd, down from tied 43rd. Kapur had four birdies, one bogey and one triple.

Sweden's Henrik Stenson gave the home fans a lot to cheer for with a brilliant third round of 64 to join Englishman Eddie Pepperell in a share of the lead going into the final round.

World No 2 Stenson posted seven birdies and a spectacular eagle at the par four seventh hole, where he holed his eight iron approach shot from 155 yards.

After dropping his only shot of the day on the 15th, Stenson birdied the closing two holes at PGA Sweden National to set the clubhouse target of 13 under par, which was matched moments later by the overnight co-leader Pepperell, who signed for a 65.

Scotland's Stephen Gallacher and Spaniard Alvaro Quiros are one shot behind the leading pair after rounds of 65 and 66 respectively, while Frenchman Victor Dubuisson is a further stroke adrift on 11 under par following a 67. Spain striker David Villa has announced he will leave La Liga champions Atletico Madrid after being made an "irresistible" offer thought to be from MLS side New York City FC.

The 32-year-old was spotted in Manchester's BridgewaterHospital on Saturday, where he was said to be undergoing a medical ahead of a move to ManchesterCity's U.S. franchise.

"It is an irresistible project for me and my family, it is very, very good. It is about football and I have to accept it," Villa said in a message to fans published on the Atletico website.

"I will be a fan of Atletico all my life for what they have given me this year."

Villa moved to Atletico from Barcelona ahead of last season and leading the attack alongside Diego Costa, helped them win a first La Liga title since 1996.

They also came within 90 seconds of winning the Champions League before Real Madrid rallied to claim the title 4-1 after extra time in last week's final in Lisbon.

"It has been a great project for me both personally as well as sporting and now I face a new challenge which is what I have always looked to do in my career and my life," he added.

"I would like to thank the people at Atletico and thosethat tried to convince me to stay, like Cholo (coach Diego Simeone) and the rest of the coaching staff."

Villa was named in Spain's 23-man squad for the World Cup in Brazil, where the defending champions will open their Group B campaign against the Netherlands in Salvador on June 13 before facing Chile and Australia. 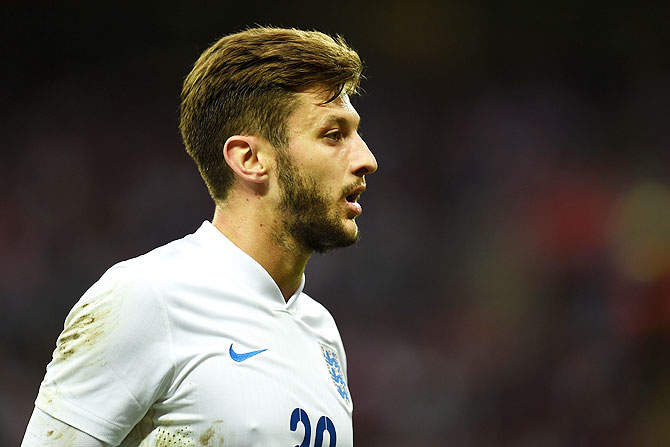 Southampton and England midfielder Adam Lallana has reportedly been offered a final offer of 25 million pounds by Liverpool, as speculations suggest that the Premier League runners-up want to complete the deal swiftly or they would consider moving on to alternative transfer targets.

Southampton must reportedly pay 25 percent of any transfer fee for their skipper, who would be playing as part of the England squad in the World Cup, to Bournemouth, who sold Lallana to his current club.

According to the BBC, Southampton had earlier turned down Liverpool's opening offer of 20 million-pounds after indicating that the they wanted to end up with that amount from any deal themselves and Brendon Rodgers' side's latest bid would leave Lallana's side with 18.75 million pounds with the rest 6.25 million pounds going to Bournemouth .

Lallana reportedly earned himself a place in the Professional Footballers' Association Premier League team of the year, after his side finished eighth in the Premier League with 56 points, which is highest league points total the club has managed, the report added. 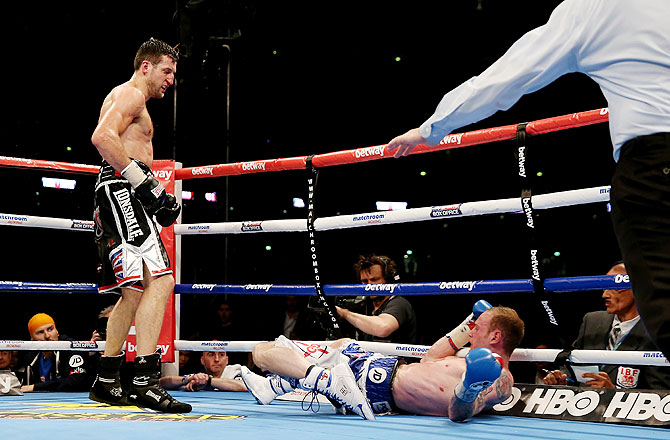 Carl Froch landed the punch of his life to knock out George Groves in the eighth round and retain his WBA and IBF super-middleweight titles in front of an 80,000 sell-out crowd at Wembley Stadium on Saturday.

The grizzled 36-year-old, in his 12th world title fight, exploded his right glove flush on to the chin of fellow Briton Groves late in the round to end the contest in brutal fashion.

"That was a great right-hander. I timed it perfectly," said the Nottingham fighter who has struggled throughout his career to earn the plaudits his 33-2 record merits.

"I was trying to close down George, at times the crowd were getting a bit bored but I was not going to force it.

"I was biding my time and I knew as soon as I landed it correctly, on the chin, on the jaw section of the cranium, it would be all over and it was.

"It must be the best punch I have ever thrown and landed in my life. It is not going to get any better than this."

Froch's 24th knockout victory came out of the blue after an often cagey fight that occasionally burst into life before a British record crowd for a boxing match accoding to local media.

"I think I was ahead on the scorecards until that," said Groves, who was controversially stopped in the ninth round when he met Froch for the first time in November.

"I'll be pushing hard to get my world title shot and maybe, if he's still boxing, that might be against Carl again. Back to the drawing board."

Pele's son sentenced to jail for 33 years for money laundering 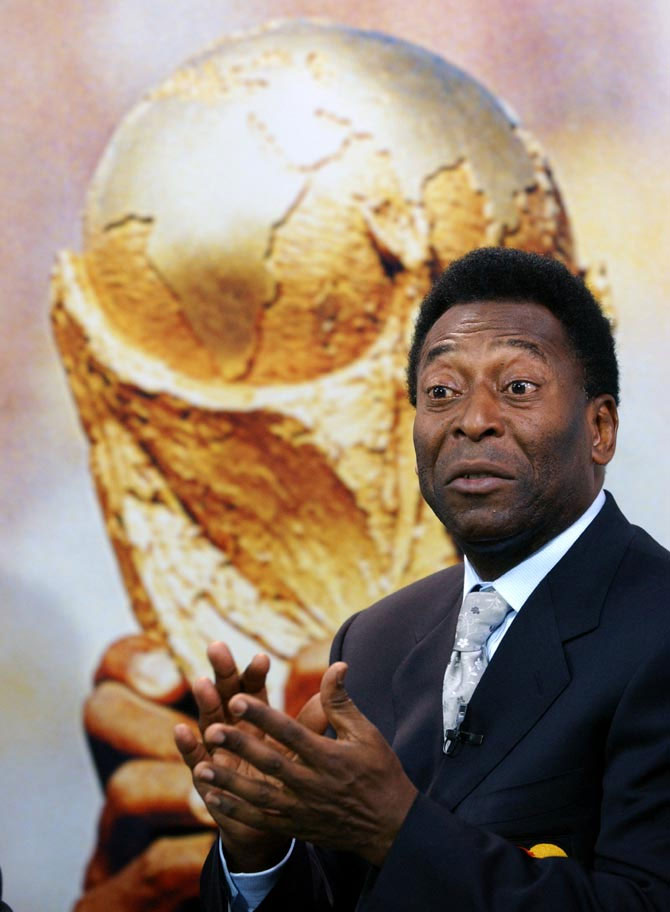 Brazilian football legend Pele's son has been sentenced to 33 years in jail for laundering of money that he raised from drug trafficking.

Pele's son Edinho, who is a retired footballer and played as a goalkeeper for his father's old club, Santos, in the 1990s, was first reportedly arrested in 2005 and has served a sentence for drug trafficking offences and links with a notorious drug dealer in the city of Santos.

According to the Mirror, Edinho has admitted that he is a drug addict but has denied the trafficking charges.

The ruling regarding the case was reportedly issued by a judge in the coastal city of Praia Grande, in Sao Paulo state.

The Brazilian media is reportedly expecting Edinho to appeal, even thought they have not been able to contact Pele's son.

Edinho is Pele's third son from his first marriage and was only five when the family moved to New York to play for Cosmos and on returning to Brazil the legend's son decided to purse a career in professional football as a goalkeeper.

However, Edinho's detention and alleged involvement with drug gangs reportedly took most people in Brazil by surprise.

Pele, who went to visit his son several times in jail, in 2006 said that God willing, justice would be done, as there is not a shred of evidence against his son.