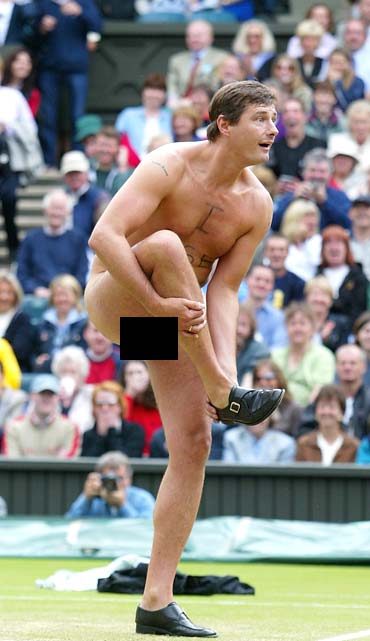 Call it naked ambition or just craving for attention, streakers at sporting events have the 'butt cheek' to dare to bare. Read on to check out those who got their 15 seconds of unabashed fame.

A male streaker runs onto Centre Court as Lleyton Hewitt of Australia plays David Nalbandian of Argentina during the Wimbledon men's singles final at the All England Lawn Tennis Club, on July 7, 2002.

Streaker has a ball at Lord's 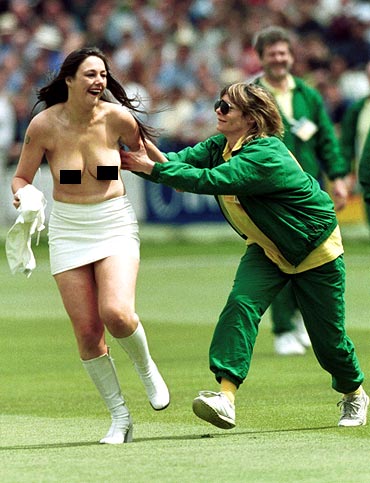 A streaker runs past the players during the fourth day's play in the first Test match between England and Pakistan at the Lord's cricket ground, in London, on May 20, 2001.

A treat for Tiger! 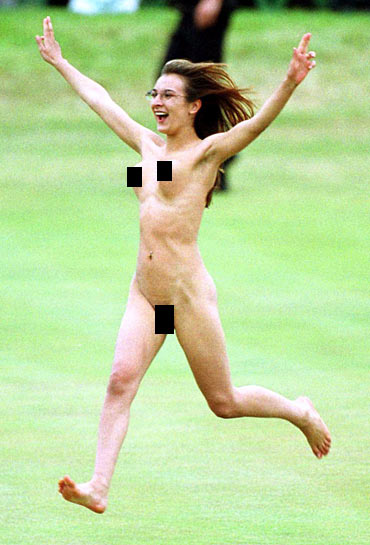 A female streaker on the 18th green as Tiger Woods of the US makes his final putt during the final round of the British Open Golf Championships, at the Old Course, St Andrews, Scotland, on July 23, 2000. 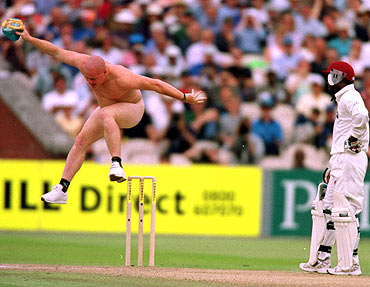 A male streaker jumps over the stumps during day three of the third Test between England and West Indies at Old Trafford, in Manchester, on August 5, 2000. 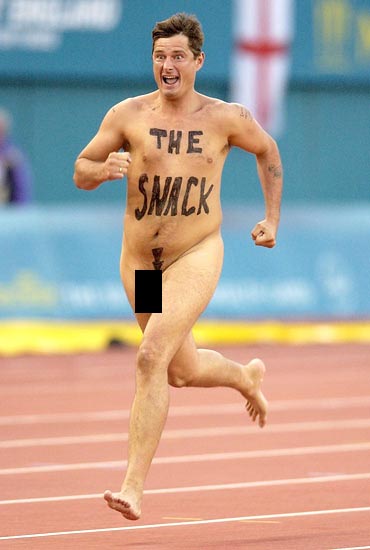 A streaker runs down the track at City of Manchester Stadium during the 2002 Commonwealth Games, in Manchester, on July 27, 2002.

A little bit too cheeky... 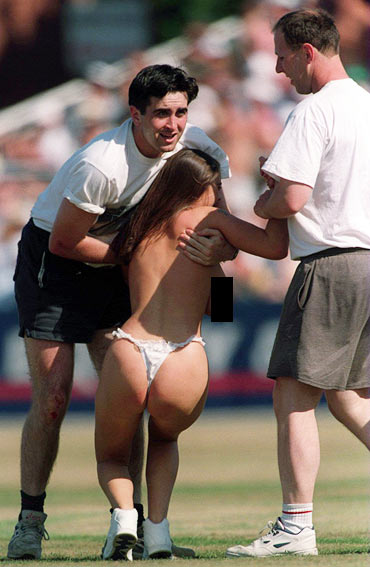 A streaker is wrestled to the floor by stewards during day three of the fourth Test match between England and Pakistan at Old Trafford, Manchester, on July 29, 1995. A streaker wearing only an apron entertains the crowd before the start of the Wimbledon men's final between Richard Krajicek and Malivai Washington, on July 7, 1996.

It was the first time that streaking was witnessed at Wimbledon and the offender was Melissa Johnson, a 23-year-old student working as a catering assistant at the tennis championships.

Squaring up to a streaker 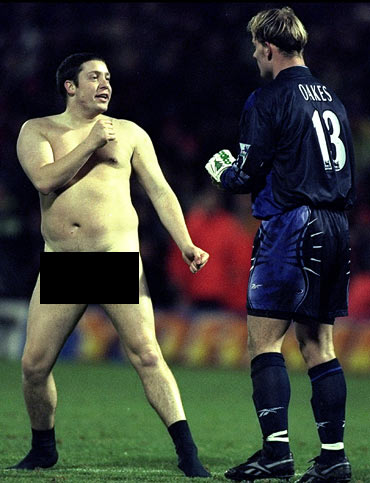 Aston Villa goalkeer Michael Oakes squares up to a streaker during the match against Charlton Athletic in the English Premier League, at the Valley, in Charlton, on December 21, 1998. 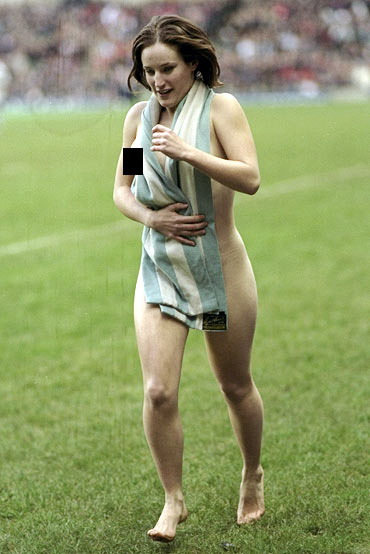 A streaker runs across the pitch during the Varsity Match between Oxford and Cambridge at Twickenham in London, December 9, 1997. 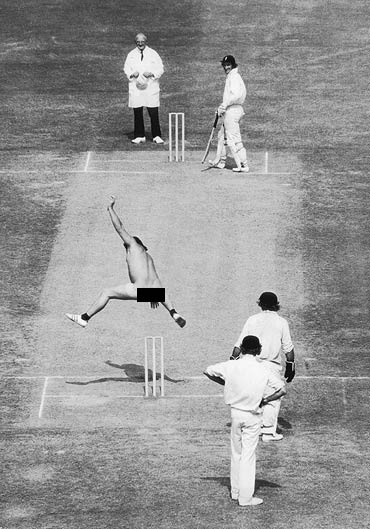 A streaker vaults over the stumps during a Test match at the Lord's cricket ground in London, on August 1, 1975.

When Chappell shielded a streaker 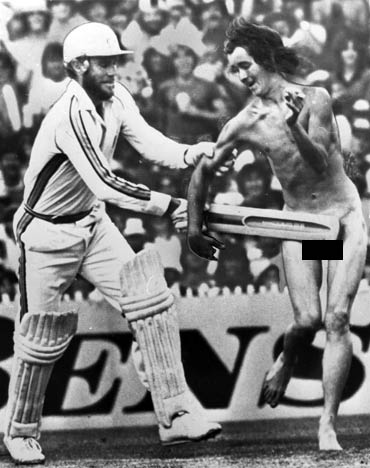 Australia's cricket captain Greg Chappell shields a streaker with his bat during the World Series match between Austalia and the West Indies in Brisbane on December 10, 1979. 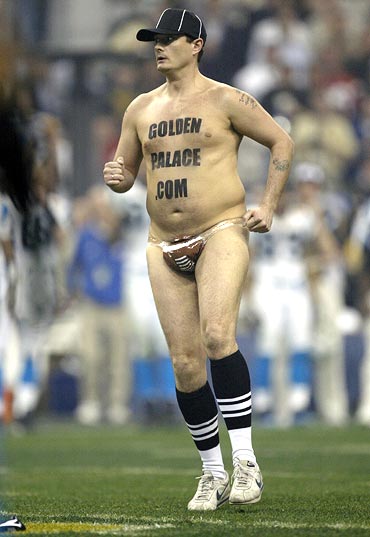 A streaker walks across the field during Super Bowl XXXVIII game between the New England Patriots and the Carolina Panthers at Reliant Stadium, in Houston, Texas, on February 1, 2004. A streaker makes a call as he is tackled by the police during the match between British and Irish Lions and Manawatu at Arena Manawatu in Palmerston, New Zealand, on June 28, 2005. 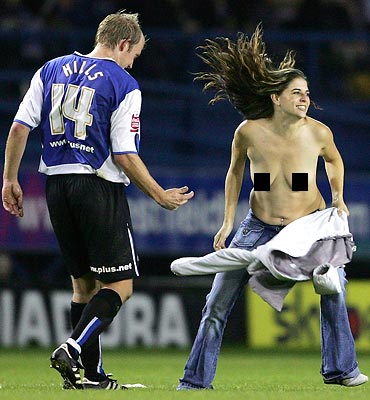 A streaker shakes a leg after running onto the pitch next as Sheffield Wednesday player John Hills looks on during the Coca-Cola Championship match against and Brighton and Hove Albion, in Sheffield, on October 24, 2005.

A streaker in cock-a-hoop mood 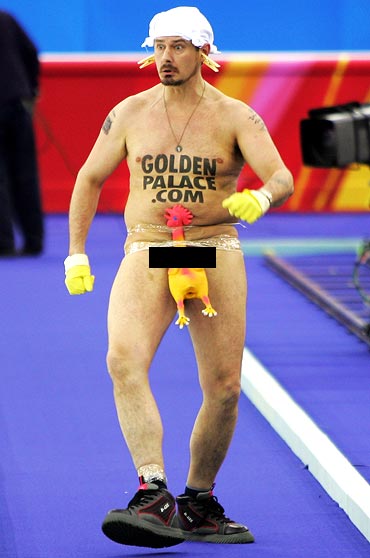 A streaker makes his way into the arena during the gold medal match of the men's curling between the United States and Great Britain during Day 14 of the Turin 2006 Winter Olympic Games in Turin, Italy, on February 24, 2006.

Getting batting tips from KP? 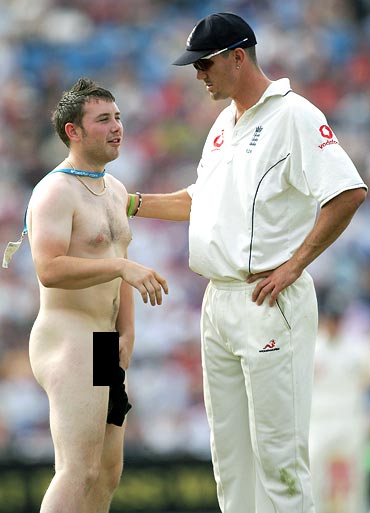 England batsman Kevin Pietersen talks to a streaker during day three of the third Test match against Pakistan at Headingley in Leeds, on August 6, 2006. 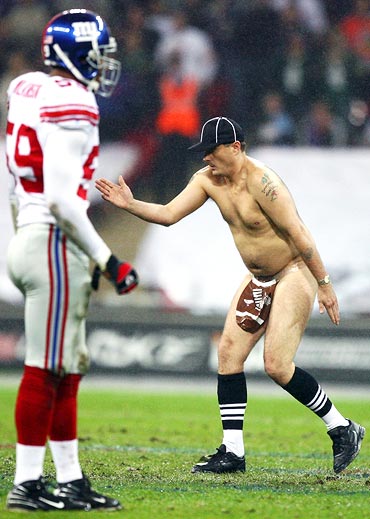 Mark Roberts popularly known as the 'serial streaker' dances on the field of play during the NFL Bridgestone International Series match between New York Giants and Miami Dolphins at Wembley Stadium on October 28, 2007 in London.

When Symonds knocked down a streaker 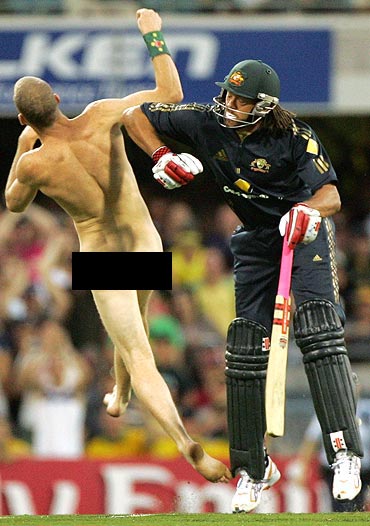 Andrew Symonds of Australia knocks over a streaker who ran onto the field during the CB Series second final match against India at the Gabba in Brisbane, on March 4, 2008. 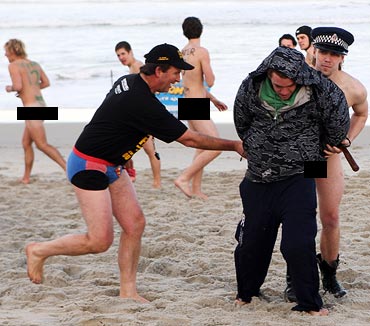 A naked 'policman' escorts a fully-clothed streaker from the field during a nude rugby game at St Kilda Beach in Dunedin, on July 12, 2008.

The nude rugby match on the beach is a traditional prelude to a New Zealand All Blacks Test match in Dunedin against a visiting team. 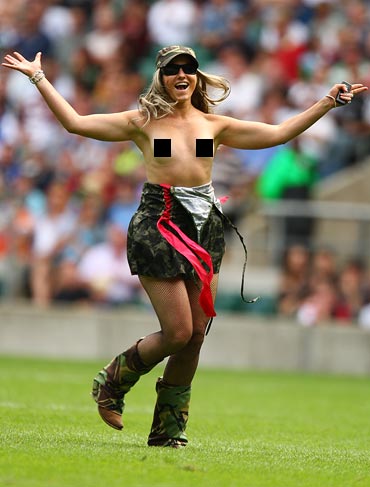 A streaker runs on to the pitch during the Middlesex Sevens rugby union game at Twickenham Stadium in London, on August 15, 2009. 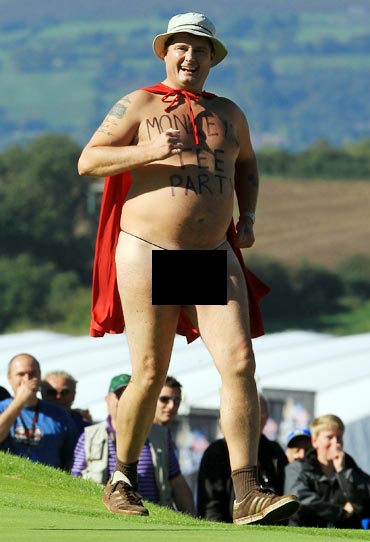 A streaker invades the 18th green in the singles matches during the 2010 Ryder Cup at the Celtic Manor Resort in Newport, Wales, on October 4, 2010.
More
Write a
Comment
Print this
article