Sign in  |  Create a Rediffmail account
Rediff.com  » Sports » I am mortified at the death of my beloved Reeva: Pistorius 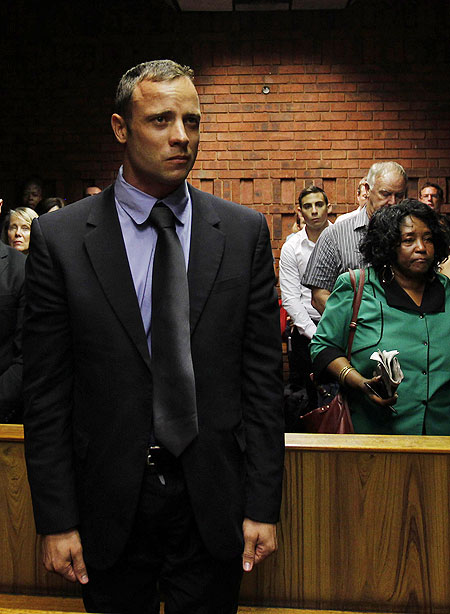 "Blade Runner" Oscar Pistorius put on his artificial legs and walked across his bedroom before firing four shots through a locked bathroom door, killing his cowering girlfriend in cold blood, prosecutors said on Tuesday.

Reeva Steenkamp, a 30-year-old law graduate and model, died after being hit by three rounds from a 9-mm pistol, prosecutor Gerrie Nel said.

Pistorius, 26, wept uncontrollably in court as Nel outlined details of a shooting that has stunned South Africa and the millions around the world who saw the double amputee's track glory as the ultimate tale of triumph over adversity.

Later, in an affidavit read out by defence lawyer Barry Roux, Pistorius said he had been "deeply in love" with Steenkamp, whom he had been dating since November, and had no intention of killing her.

Having had previous death threats, Pistorius said he slept with a 9-mm pistol under his bed in his plush Pretoria home in the heart of a well-secured gated community.

He and Steenkamp went to sleep on Wednesday night -- the eve of Valentine's Day -- shortly after 10 p.m., he said.

However, in the middle of the night, he awoke in pitch darkness and thought an intruder had climbed through the window of his bathroom, Pistorius said.

He climbed out of bed without putting on his prosthetic legs and went towards the closed bathroom door, not realising Steenkamp was behind it, he said. He then fired several shots into the door, before shouting to Steenkamp to call the police.

Realising she was not in bed, he grabbed a cricket bat to beat down the bathroom door and found her slumped on the floor.

"I am absolutely mortified at the death of my beloved Reeva," he said in the affidavit.

As Roux read the statement, Pistorius was crying uncontrollably, to the point magistrate Desmond Nair had to halt proceedings for several minutes.

"You need to concentrate on what's going on," he told him.

'He'll be a danger to witnesses; he must stay in jail' 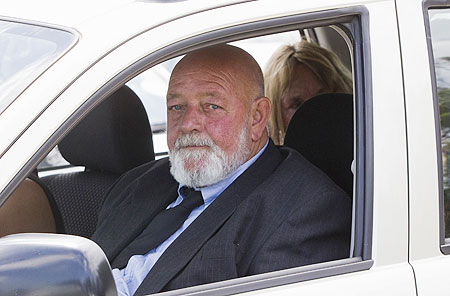 Nearly 1,000 km (600 miles) away, on South Africa's windswept southern coast, scores of mourners gathered in the city of Port Elizabeth for Steenkamp's funeral. Amid the grief, there was little sympathy for Pistorius.

"She was an angel. She was so soft, so innocent. Such a lovely person. It's just sad that this could happen to somebody so good," said Gavin Venter, an ex-jockey who worked for Steenkamp's father.

"I'm disgusted with what he did. He must be dealt with harshly," he added, shortly before Steenkamp's cremation in the windswept Victoria Park Crematorium.

"Without a doubt he's a danger to the public. He'll be a danger to witnesses. He must stay in jail."

The case has drawn further attention to endemic violence against women in South Africa after the gang-rape, mutilation and murder of a 17-year-old near Cape Town this month.

Members of the Women's League of the ruling African National Congress protested outside the Pretoria central magistrates court, waving placards saying: "No Bail for Pistorius" and "Rot in jail". 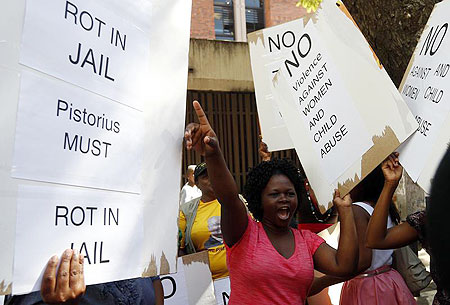 Before Pistorius' dramatic testimony, Nel, the lead prosecutor at the hearing, painted a picture of premeditated killing -- a crime that carries a life sentence in South Africa.

"If I arm myself, walk a distance and murder a person, that is premeditated," he said.

"The door is closed. There is no doubt. I walk seven metres and I kill."

The arrest of Pistorius stunned the millions who had watched in awe last year as the Olympic and Paralympic sprinter reached the semi-final of the 400 metres in the London Olympics, running on high-technology carbon fibre 'blades'.

But the impact has been greatest in sports-mad South Africa, where Pistorius was seen as a rare hero who had transcended the racial divides that persist 19 years after the end of apartheid.

His endorsements and sponsorships, which include sportswear giant Nike, British telecoms firm BT, sunglasses maker Oakley and French designer Thierry Mugler, are thought to be worth as much as $2 million a year.
Tags: Pistorius , South Africa , Thierry Mugler , BT , Oakley 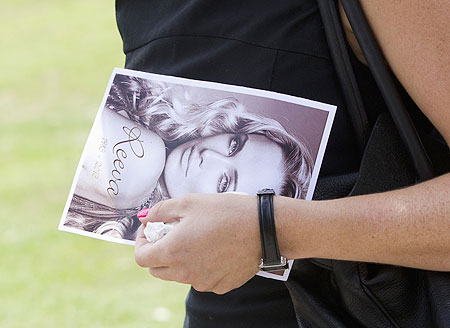 Image: A mourner leaves, holding a picture of model Reeva Steenkamp, after her memorial service at the Victoria Park Crematorium in Port Elizabeth on Tuesday
Photographs: Rogan Ward/Reuters

In his affidavit, Pistorius said he earned 5.6 million rand a year, and owned properties worth nearly $1 million.

Dressed in a dark suit, Pistorius arrived at the court in a police car shortly before 7 a.m. (0500 GMT). Proceedings were delayed as more than 100 journalists from around the world jostled to get into the dimly lit, brick-face courtroom.

After the hour-long private ceremony in the cream-coloured hill-top church in Port Elizabeth, Steenkamp's brother Adam and uncle Mike, fighting back tears, spoke briefly to reporters.

"There's a space missing inside all the people that she knew that can't be filled again," Adam Steenkamp said.

"We are going to keep all the positive things that we remember and know about my sister. We will miss her."