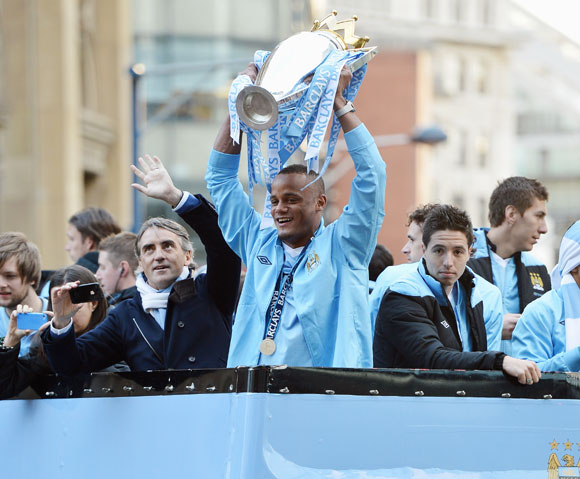 Image: Roberto Mancini the manager of Manchester City stands alongside his captain, Vincent Kompany (C) and Samir Nasri (R) as they parade the Barclays Premier League trophy in front of thousands of fans during their victory parade around the streets of Mancheste
Photographs: Christopher Furlong/Getty Images

Even the sun shone for Manchester City as the Premier League champions celebrated their long-awaited and dramatic title win with a euphoric victory parade on Monday.

Twelve months ago Manchester United's players needed umbrellas after it rained on their celebrations following a record 19th English championship.

But under clear skies, 24 hours after an extraordinary 3-2 victory over Queens Park Rangers secured their first title for 44 years, Manchester's streets were transformed into a sea of blue as up to 100,000 City supporters lined the pavements.

Many fans on the two-mile route were too young to recall City's last title triumph in 1967-68 when they finished two points clear of United.

Others, with their team trailing QPR 2-1 in stoppage time, had poured out of the Etihad Stadium believing Roberto Mancini's side had blown the title before late goals by Edin Dzeko and Sergio Aguero snatched it from United's grasp on goal difference.

"Yeah, a little," said Argentine forward Aguero when asked in front of fans whether he cried after scoring the title-clinching goal. 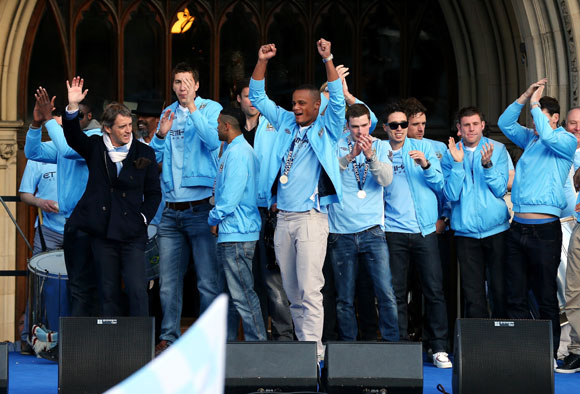 Image: The players of Manchester City wave to their supporters outside Manchester Town Hall as they leave for the start of their victory parade around the streets of Manchester on May 14
Photographs: Alex Livesey/Getty Images

Over the years City have been mocked by United fans and this was their chance for payback.

As the United players drowned their sorrows two miles away at the club's annual player of the year awards night at Old Trafford, City players and fans partied on the streets.

Manager Mancini wore a blue and white City scarf as he waved to supporters, many with their faces painted in the club's colours, from the steps of Manchester town hall.

"The place was shaking, I was shaking. It was one of the most dramatic days in my life," he said.

Graham Jackson, a 64-year-old City supporter, summed up the mood of euphoria.

"I thought I was going to my grave and never see them win it so I am so made up, I tell you," he said.

Another, Gary Aldridge, added: "I have never seen so many grown men cry, on the streets, it's just unbelievable,"

There were a couple of notable absentees 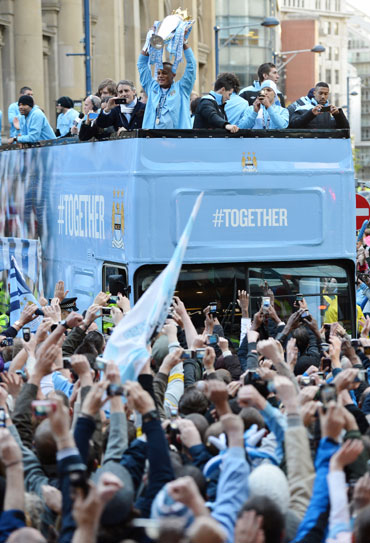 Image: Manchester City captain Vincent Kompany (C) hows off the Barclays Premier League trophy in front of thousands of fans during their victory parade around the streets of Manchester
Photographs: Christopher Furlong/Getty Images

There were a couple of notable absentees from the parade in City's controversial Italian forward Mario Balotelli and influential midfielder Yaya Toure.

Balotelli had flown back to Italy following his international call-up for next month's European Championship.

He also missed the FA Cup parade last season, which marked the end of City's 35-year wait for a trophy, after being granted permission to return home.

Toure, a driving force in City's title charge, was in Monaco receiving treatment for an injury suffered against QPR.

But even their absence failed to spoil the party, certainly not for the man selling inflatable European Cups who did a roaring trade.

Next year City fans will hope their team is parading the real Champions League trophy through the streets of Manchester.