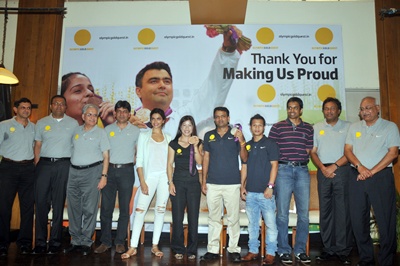 In the wake of India's biggest ever medal haul of six in its Olympic Games history at London, chief national badminton coach Pullela Gopichand on Thursday exuded confidence that the number would be bettered four years later in Rio de Janeiro.

"The team did fantastically well and Indian sports today is looking bright, something which we could not have anticipated ten years ago. What we can do tomorrow is what excites me. Hope we continue growing from here to the next Games," said Gopichand at a felicitation function organised by the Olympic Gold Quest (OGQ) co-founded by former shuttle ace Prakash Padukone and billiards wizard Geet Sethi.

Gopichand's star ward, Saina Nehwal, is among the four medalists in London who have been supported by OGQ, the others being pistol shooter Vijay Kumar, rifle shooter Gagan Narang and woman boxer M C Mary Kom.Shuttler Saina, bronze medalist in women's singles, was unable to attend the felicititation function for the four OGQ-supported London Games medal winners due to prior commitments.

Gopichand, along with Mary Kom, Vijay Kumar and young boxer Devendro Singh, praised OGQ for the timely support it gave to the medalists in the run up to London 2012.

"We got a lot of support from the government while OGQ, through their vision, also gave us timely support which was very important," said Gopi, a former All England men's singles champion."

"I can't express my gratitude to OGQ. OGQ has been supporting from the time I had no sponsors. Their sport science team ensured that I moved from 46 kg to 51 kg (weight category) smoothly. They found a world class coach in Charles Atkinson for me and he really helped me to fight better against taller and stronger opponents," said Mary.

'OGQ gave us the final push up to the podium' "OGQ not only supported my training, but also motivated me to always give my best. I attended a motivational session organised by OGQ and it was extremely inspirational for me to listen to the experience and advice of legends like Geet Sethi, Prakash Padukone and Olympic (hockey) gold medallist M M Somaya," said Vijay.

"OGQ gave us the final push up to that state (medal podium)," said the army shooter who won silver in the 25m rapid fire event, the only other silver won by an Indian in London other than wrestler Sushil Kumar.In a message, Saina also praised the organisation founded by Prakash and Sethi for having arranged "special treadmill for me at home."

"They also took care of my hotel costs at London close to the badminton venue. This was crucial because the Games Village was too far from the venue," she added.

Narang, who could not reach the Bombay Gymkhana in time because of a delayed flight from Hyderabad, informed that OGQ had been supporting him since 2007 and wished that his medal would trigger off an interest in shooting among the youngsters in the country.

"I am happy to win this medal for the country and I hope it inspires many more young kids to take up the sport of shooting," the bronze winner in the men's 50m air rifle event said in his message.While praising all the Indian medalists in London, Prakash noted that the heist did not have a yellow metal in it."

"We must now look forward. OGQ has just launched a scholarship programme for youngsters to groom our athletes for 2016 and 2020. We plan to select 20-25 players for the programme this year. By Rio 2016, OGQ wants to support 100 athletes," he added.

"There will be proper mentoring and targets will be set with constant monitoring. This will give us a bigger pool of players to work with and will improve our chances of success in the long run," said the shuttle wizard.

Sixteen of them competed in London, he added.Sethi recalled how the OGQ was conceptualised just before the Beijing Games in 2008 and selected the sportspersons having fire in their belly, strong convictions and huge work ethics.

"The government is doing a lot and we at OGQ are there to fill up the small gaps. We have doubled our medal tally from 3 in Beijing to 6 in London. In the next Games our tally should be (at least) 12," he said.