Expect a few surprises in the women's track events 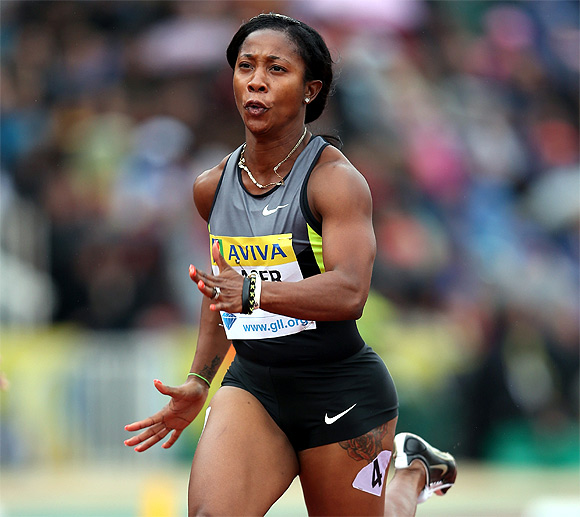 Image: Shelly-Ann Fraser-Pryce of Jamaca in action in the 100m during day two of the Aviva London Grand Prix at Crystal Palace
Photographs: Julian Finney/Getty Images

Defending Olympic champion Shelly-Ann Fraser-Pryce is the world leader this year with a time of 10.70.

The biggest obstacle to another gold for the Jamaican is likely to come in the shape of world champion Jeter Carmelita of the U.S. - the second fastest woman in history.

Another Jamaican-American duo likely to be in the mix are Veronica Campbell-Brown and Allyson Felix although both will have a closer eye on the 200 metres.

Felix made the U.S. 100 team after training partner Jeneba Tarmoh pulled out of a controversial third-place runoff at the Olympic trials following a dead heat in the original race.

Blessing Okagbare, who will also compete in the long jump, aims to gatecrash the London party and become Nigeria's first Olympic 100 medallist.

She beat Jeter and Fraser-Pryce in July, going under 11 seconds for the first time, and improved a week later to post 10.96.

Campbell-Brown is going for an unprecedented third successive gold 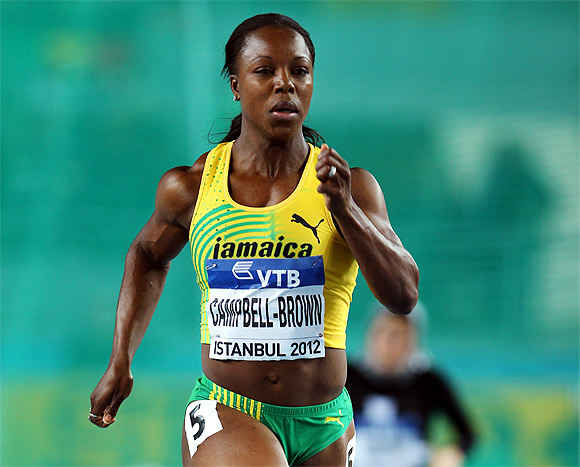 Another instalment of the Jamaica v United States rivalry is likely to define the half-lap sprint.

World champion Veronica Campbell-Brown of Jamaica is going for an unprecedented third successive gold medal in the event but will have her work cut out against a string of rivals who have run faster this year.

Chief among them is triple world champion Allyson Felix who finished second behind Campbell-Brown in Athens in 2004 and Beijing in 2008 and ran the quickest time of the year to win the U.S. trials.

Carmelita Jeter and Sanya Richards-Ross, who is doubling up in the 400, complete an American team made up of genuine medal contenders.

Shelly-Ann Fraser-Pryce, the 100 champion, is the fastest Jamaican this year and will double up in the sprints while Russian Aleksandra Fedoriva offers a possible European challenger to the Jamaicans and Americans.

A surprise winner when she held off Allyson Felix on the home straight in Daegu, Montsho has got faster since and will be tough to beat.

Felix is sticking to the shorter sprints in London but fellow American Sanya Richards-Ross, dethroned as world champion by Montsho, is feeling healthier than she has for years and has the best time of 2012.

Russian Antonina Krivoshapka and Jamaica's Novlene Williams-Mills have also been quick while Britain's Beijing champion Christine Ohuruogu has finally found form to put her back in the frame.

Jelimo will have to contend with Savinova and Semenya Pamela Jelimo, 23, became the first Kenyan female to land an Olympic gold when she won in Beijing and is back in form in time for the London Games.

Having set the third fastest ever time in Zurich in 2008, Jelimo has this year taken gold in the world indoor championships and set the two quickest times.

Jelimo has named her rivals as world champion Mariya Savinova of Russia, South Africa's Caster Semenya and the up and coming Ethiopian teenager Fantu Magiso who beat everyone in Rome in May.

Morocco's Mariem Alaoui Selsouli had run the fastest time of the year but was banned for doping on the eve of the Games, leaving Ethiopia's Abeba Aregawi as the in-form athlete.

Turkey's Asli Cakir, who served a two-year doping ban in 2004, finished second behind Selsouli in Paris, smashing her own personal best in the process.

World champion Jenny Simpson will fancy her chances of winning a tactical race to give the Americans their first Olympic title in the event.

Ekaterina Kostetskaya has been the quickest of a trio of Russians who will be in the medal hunt while Viola Kibiwot offers the best hope of Kenya keeping the title Nancy Langat won in Beijing.

Tirunesh Dibaba remains a favourite in the long distance events 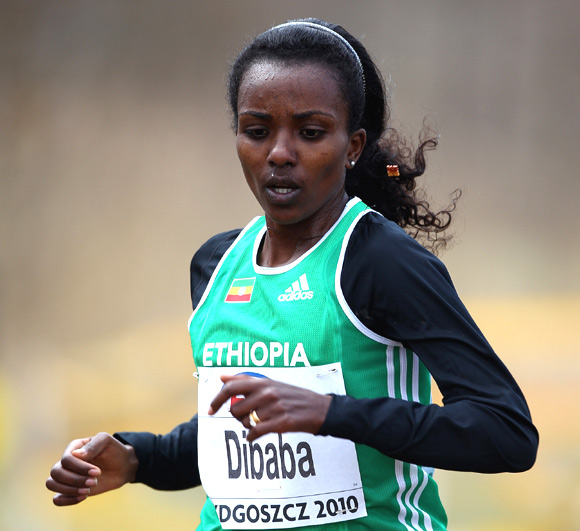 A clash of the distance queens is still a possibility with Ethiopia's Tirunesh Dibaba, who won the 5,000-10,000 double in Beijing, yet to rule out a title defence despite only running once in the discipline this year.

Kenya's Vivian Cheruiyot, who has the best time in the world this year, matched Dibaba's double at last year's world championships and will be out to repeat the feat in London.

Ethiopian Meseret Defar won the title as an 18-year-old in Athens eight years ago and would love nothing more than to get back on the top step of the podium.

Sally Kipyego and Viola Kibiwot are likely to be the other Kenyan challengers while Gelete Burka and Sentayehu Ejigu will race for Ethiopia with the medals almost certain to go back to East Africa.

Cheruiyot is bidding for a long-distance double 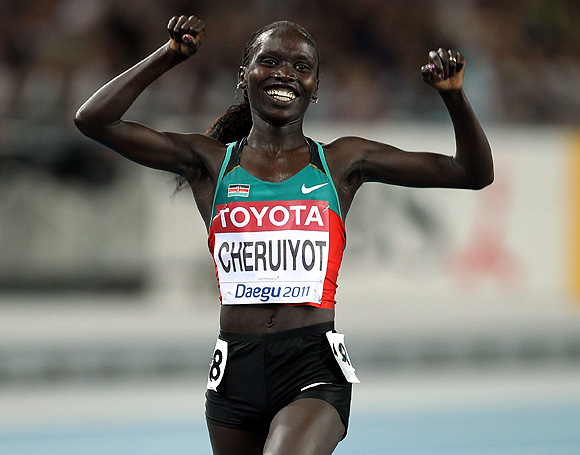 Image: Vivian Jepkemoi Cheruiyot of Kenya celebrates as she crosses the finish line to win the women's 10,000 metres final during day one of the 13th IAAF World Athletics Championships at the Daegu Stadium
Photographs: Ian Walton/Getty Images

The highly-anticipated race between world champion Vivian Cheruiyot and Olympic champion Tirunesh Dibaba is the highlight of the first evening of action in track and field.

Cheruiyot is bidding for the long-distance double that Dibaba achieved at the Beijing Olympics, having accomplished the feat at last year's world championships.

Sally Kipyego, silver medallist at the worlds behind Cheruiyot, is also doubling up in the 5,000 and 10,000 and will look to become Kenya's first champion in the event.

Dibaba looks near to her best, though, and has run the fastest time of the year, her fearsome finish driving her to victory in Oregon in June in 30 minutes 24.39 seconds.

In another race expected to be dominated by East Africans, Russia's Yelizaveta Grechishnikova looks the best hope from outside the region.

World record holder Paula Radcliffe's withdrawal with a foot injury has robbed the host nation of their best medal chance in the event but is unlikely to affect the battle for gold.

Incredibly the title has only been in East African hands once, when Ethiopia's Fatuma Roba won gold in Atlanta in 1996, but Kenya's Mary Keitany will fancy her chances after capturing the last two London Marathons.

Edna Kiplagat and Priscah Jeptoo finished first and second at the world championships as Kenya swept the podium last year and they should be contenders.

Russian Liliya Shobukhova ran the fourth quickest women's marathon of all time in Chicago last year but has not competed in 2012.

Zaripova is the favourite in the 3,000 metres steeplechase 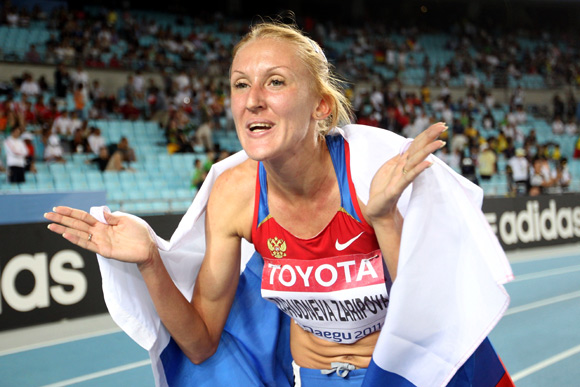 World champion Yuliya Zaripova will hope to land one of the six gold medals the Russians have targeted in track and field in London in only the second running of this event at the Olympics.

Kenyan Milcah Chemos and Ethiopians Sofia Assefa and Hiwot Ayalew ran the fastest times of the year when they swept the three leading positions in the Bislett Games while world championship runner-up Habiba Boudraa of Tunisia should also be in the frame.

Pearson remains a strong favourite for gold in 100 meters hurdles 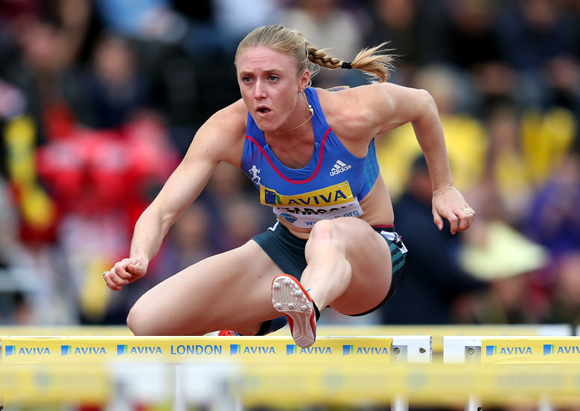 World champion Sally Pearson remains a strong favourite for gold despite finishing second behind American Kellie Wells in her previous outing at the London Grand Prix.

That was the Australian's first defeat this year, to go with the single blemish on her record last year, and is unlikely to be more than a blip in her path to the title, perhaps in world record time.

American Lolo Jones knows full well about the fine line between success and failure in the event and will have a chance at redemption after stumbling in the final as favourite in Beijing.

Dawn Harper was the beneficiary then and returns to defend her title in a strong American team which, along with Jamaica's Brigitte Foster-Hylton, present the biggest challenge to Pearson.

World champion Lashinda Demus did not reach the final in Athens in 2004 and failed to qualify for the Beijing Games so will be determined to make the most of what, at 29, could be her final Olympics.

Champion Melaine Walker of Jamaica won the 2009 world championships gold and finished second behind American Demus in Daegu last year and the pair are likely to be there or thereabouts when the medals are decided.

British hopeful Perri Shakes-Drayton ran the third fastest time of the year at the London Grand Prix just before the Games with only world leader Natalya Antyukh and fellow Russian Irina Davydova having gone faster in 2012. 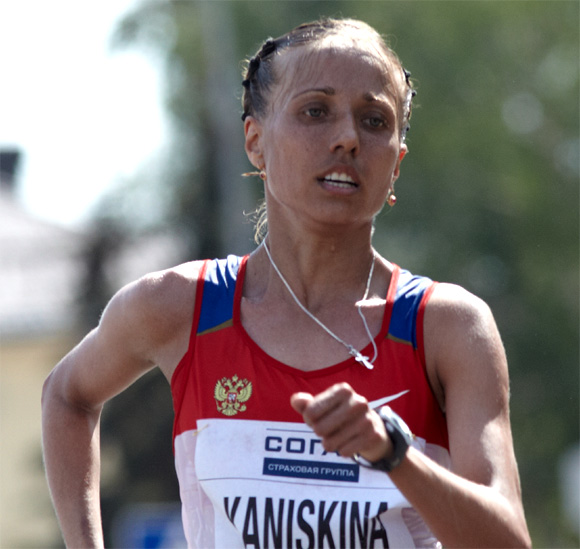 Olympic champion Olga Kaniskina of Russia, who took a record third world title in Daegu last year, is the favourite for gold in London.

Kaniskina, the second fastest woman of all time, is likely to be challenged by two compatriots, world bronze medallist Anisya Kirdyapkina and the up-and-coming Yelena Lashmanova.

Lashmanova, 19, beat Kaniskina at the World Cup in May and would become the youngest Olympic race walking champion, male or female, if she takes gold.

China's Hong Liu, second behind Kaniskina in Daegu and fourth in Beijing, also has a chance of a medal.

Russia are the defending champions from Beijing where the United States dropped the baton in the first heat and were disqualified. The Jamaicans suffered a similar fate in the final.

Baring mishaps, the Americans and Jamaicans will again be strong favourites for gold in London.

The United States, Russia and Jamaica are familiar foes in this event having occupied the three podium places at the past three Olympics and at three of the past five world championships.

With Antonina Krivoshapka and Yulia Gushchina, the fastest and third quickest in the world this year, Russia look the best for London glory with four members of their squad having run under 50.00 seconds this year.

The U.S. team won their third consecutive world championships in 2011 and boast former world champion Sanya Richards-Ross - the only member of their team to dip under 50.00 this year.