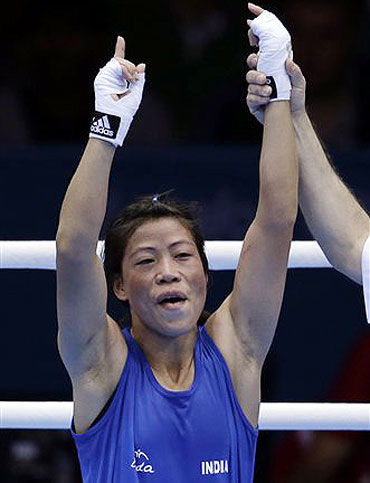 MC Mary Kom created history on Monday as she assured India its fourth Olympic medal after winning her 51kg women's boxing quarter-final bout against Maroua Rahali of Tunisia by a 15-6 margin.

She will take on local favourite and second seed Nicola Adams of Great Britain, who prevailed over Stoyka Petrova of
Bulgaria with a convincing 16-7 win, in the semi-finals on August 8.

The five-time World champion and face of women's boxing in India for the past decade is now assured of at least a bronze medal in the inaugural edition of women's boxing at the Games. She will also be the third Indian woman after Karnam Malleswari and Saina Nehwal to win an Olympic medal.

Someone who enjoys iconic status in North-East India, the performance of the 29-year old Manipuri woman, who has twin sons, will surely encourage many more from the region to take up the sport.

'Magnificent Mary', as she is known in the boxing fraternity, fought calculatively, using the first round to sort out her Tunisian opponent before upping the ante in the subsequent three rounds.

Mary Kom got a decisive lead in the third round 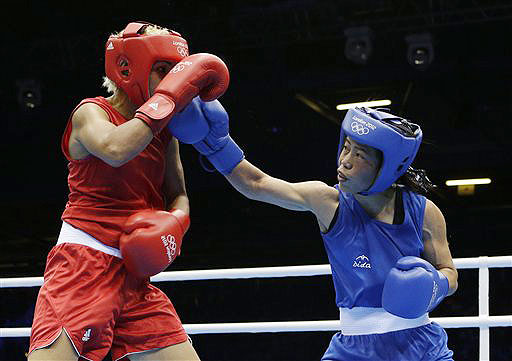 The first round was a quiet affair, with Mary gaining a slender 2-1 lead. A couple of meaty blows in the second round helped her increase it to 5-3.

A couple of right hooks followed by a lethal left hook was enough to soften up the big-bodied Tunisian girl, who was trying to use her long reach to keep the Indian at bay.

The 11-4 scoreline in the third round was the decisive lead that Mary needed, as it is never easy to erase a seven-point deficit without a knock-out.

The last round was all about keeping her cool 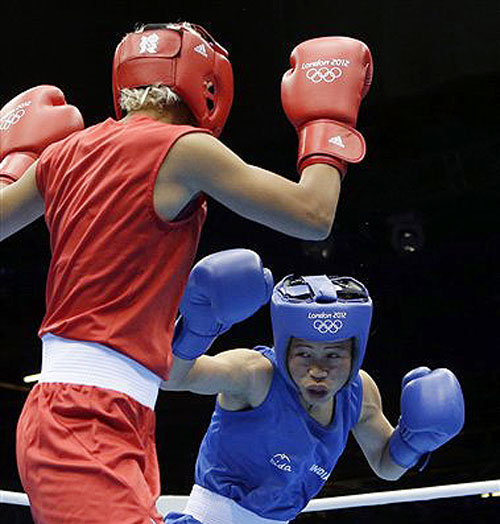 The last round was all about keeping her cool although Mary, at times, got tempted to punch her opponent at the back of her head, inviting caution from the referee.

Still she clinched the round 4-2, the final margin of 15-6 certainly a convincing way to get into the semi-finals.

For the mother who missed her twins' fifth birthday on Sunday, this is supposed to be the most precious birthday gift they received from her.