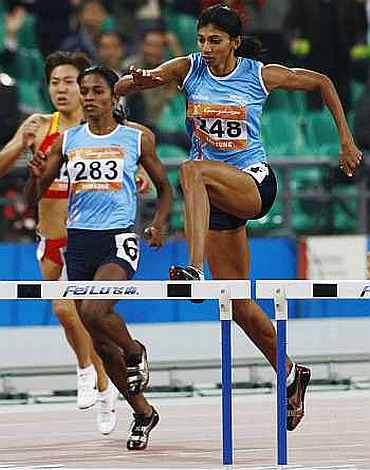 Hit hard by one of the biggest doping scandals in the run-up to the Olympic Games, India's athletics team, including a couple of medal hopefuls, would hope to seek solace and redeem their reputation with some strong performances in London.

Athletics was hit by the steroid doping scandal that involved six top quartermilers, including Asian Games double gold medallist Ashwini Akkunji, and her three 4X400m relay quartet members -- Sini Jose, Mandeep Kaur and Manjeet Kaur -- who were banned for one year by the NADA.

Their ban ended just before the Olympic qualification period but the faint hopes of appearing in the London Games were dashed after the IAAF appealed to the Court of Arbitration for Sports in Switzerland to increase their sanction to two years. 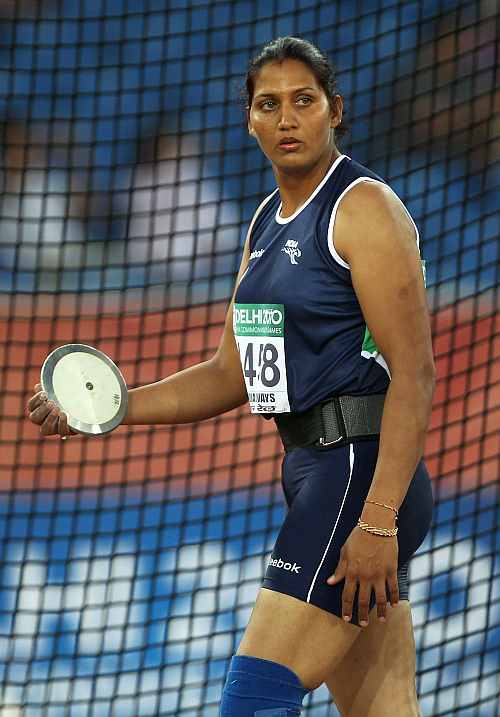 The relay quartet won gold in the 2010 Commonwealth Games in New Delhi and the Asian Games a month later. Akkunji became the toast of the country after she also won the 400m hurdles in Guangzhou, only to be caught for doping later. Manjeet ended her career after she allegedly refused to give samples to NADA officials in Patiala.

The doping saga has sullied the image of athletics after India achieved unprecedented success in the Commonwealth and Asian Games. Impressive shows by some of the athletes in the run-up to the Olympics gave some cheers. All the Indians in the fray, though, will start as rank outsiders in the British capital.

Several national records were created while Vikas Gowda became the first Indian to win a medal in the prestigious Diamond League series while also occupying the top spot in IAAF world rankings for a brief period in April.

Fourteen athletes have qualified for the London Games, the second-highest ever, after 24 took part in the 2000 Sydney Olympics. However, only two -- Gowda and Krishna Poonia in men's and women's discus -- could be considered as medal hopefuls.

Heartbreak for Joseph Abraham and Preeja It was heartbreak for some though, with Asian Games gold medallists Joseph Abraham and Preeja Shreedharan, missing the London bus after trying for berths till the last moment.

Abraham, who won gold in men's 400m hurdles in the 2010 Asian Games, was unimpressive the whole season and looked a shadow of himself.

Preeja, 2010 Asian Games gold winner in 10,000m race, and silver winner Kavita Raut, failed to qualify despite being sent to Kenya and Italy by the Sports Ministry for high altitude training.

Gowda could be the dark horse 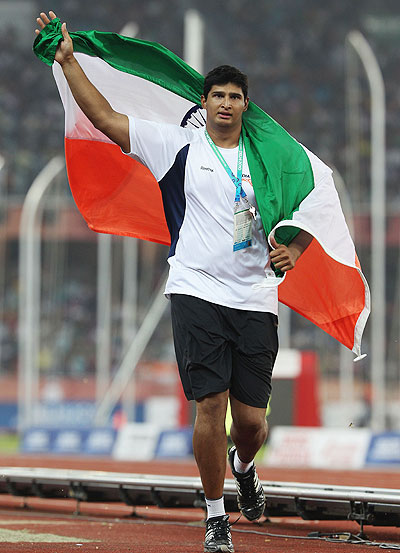 Gowda could just turn out to be the dark horse after his national record setting 66.28m throw in April in Oklahama, United States.

His confidence has been boosted after he won a bronze in the New York leg Diamond League Meet last month, the first Indian to bag a medal in the prestigious 14-leg series.

The US-based Indian, however, will have to do much better in London than his personal best of 66.28m to bag a medal as 16 other throwers are above him in the IAAF list, with reigning world and European champion Robert Harting of Germany leading the pack at 70.66m.

'Winning an Olympic medal is a lifetime dream' 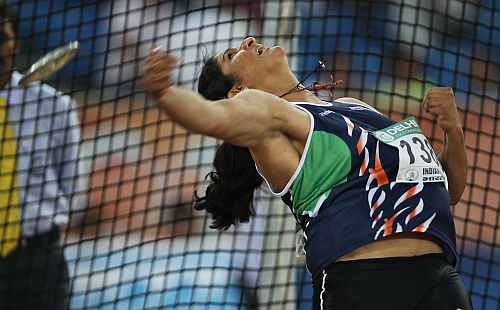 Poonia is another who could grab a medal and her confidence has been boosted after the national record effort.

She has carried injury for long after her historic gold in the 2010 Commonwealth Games. She is currently ninth in the IAAF rankings and will have to cross at least 65m to have a chance of winning a medal.

She has a personal best of 64.76m, a national record, which she created in the United States in May. Six throwers have crossed 67m so far in the season.

"Winning an Olympic medal is a lifetime dream. I know it is going to be tough and I have to go past 65m. I have been doing more then 65m during training. I am giving my 100 percent and see what happens," said Poonia, who had reached London to train at a nearby facility one month before her actual event on August 3.

'My aim is to first qualify for the final round' 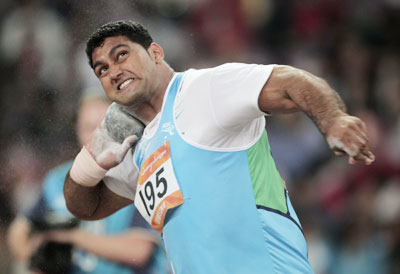 Shot putter Om Prakash Singh Karhana was also among those who broke the national record in the build-up to the Games, with an effort of 20.69m at his training base at Szombathely in Hungary in May.

He is aiming to at least qualify for the final round in his debut Olympics if not win a medal.

"I can be the dark horse as I am hurling the shot put beyond 21m during training. My aim is to first qualify for the final round and then I can think of a medal. Who knows, it depends on the performance on that day and I can grab a medal. If not, I want to finish in top six," he had said.

The surprised package in the qualification process, though, are the walkers with four of them -- Gurmeet Singh, Baljinder Singh and Irfan in 20km walk and Bahadur Rana in 50km walk -- qualifying.

The walkers though face a herculean task to compete for podium finishes as the world leading times in 20km and 50km are respectively in the range of one hour 17 minutes and three hours 38 minutes.

Marathoner Ram Singh Yadav will have to cut several minutes from his personal best of 2:16:59 he clocked in Mumbai in January to cross the Olympics 'B' standard of 2:18.00 to be among the top finishers in London.