'Reaching quarter-finals will be an achievement for rowers' 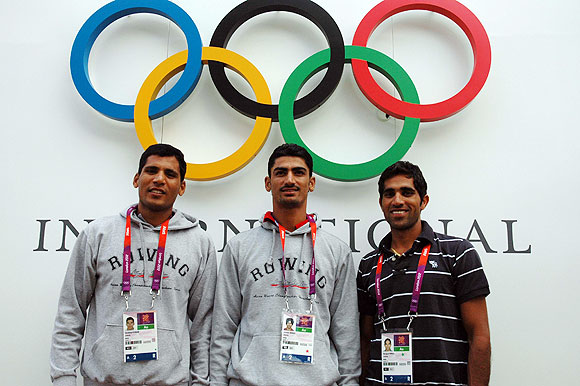 Indian rowing coach Ismail Baig is realistic about expectations from his wards at the upcoming Olympics and feels it will be a big achievement if the three-member team finishes among the first 15 in the single scull event.

"I am not going to make big promises and I think that making it to the second round in both the events -- single and doubles sculls -- will be a good showing by our rowers and then we can think of the next round," he said while on a visit to the Games Village.

The rowing events are slated to be held at Eaton Dorney -- about 36 Km from London -- and the rowers took time off from their hectic schedule to come over to a place which is "bustling with excitement and life".

"We have been training at Eaton Dorney for some time, but it gets very lonely out there so we decided on a quick visit to the Games village, just for a change," said the Hyderabadi.

"It is better to be transparent and clear about the team's chance. There is no use of making tall claims. I know it is very difficult for our rowers to be among the podium finishers. However nothing is impossible in sports," he said.

In single scull, in which Swaran Singh will participate, 33 rowers are taking part, while in the double sculls, the field comprises 22 rowers.

"If all of three of them make it to the quarter-finals, that in itself will be a good showing," he said.

"In single scull, a top six finish in the heats will enable Swaran to qualify for the quarter-finals (first 18 and six best losers). In case of double sculls, first 12 teams will go into the next round," he explained. Baig, who has been with the rowing team for 11 years in various capacities, is participating in his third straight Olympics. Under him in the last Asian games, Indian rowers gave one of their best performances winning nine medals, including one gold and five silver.

"Three of our rowers made the cut at the Asian Continental Championship in South Korea in April. Swaran finished first to claim gold in that Championship in single scull and booked the ticket for London. Sandeep and Manjit made it in double scull," he recalled.

The event is scheduled to be held from July 28 to August 4. In both the events, rowers have to engage in a 2km race to qualify for the next round.

"I think if Swaran clocks around 7 minutes and double scull duo time around 6m.30sec, they can hope to be among the quarter-finalists," he said.

"Like in Beijing, now we have a three-member team at the Olympics. In Athens we had only one rower to represent the country while in Sydney we had two rowers for one event," he said.

In Beijing, Manjit Singh, in single scull, had finished 18th which was a good showing.

For Swaran Singh and Sandeep Kumar this is their first Olympics.