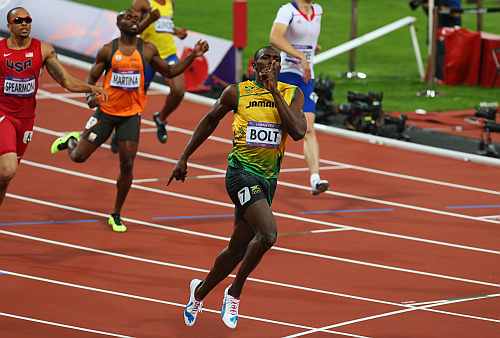 Usain Bolt won the 200 metres in 19.32 seconds on Thursday night to become the first man with two Olympic titles at that distance.

Bolt beat countryman Yohan Blake by .12 seconds, and Warren Weir took third to make it a 1-2-3 sweep for Jamaica.

The 25-year-old Bolt won the 100 on Sunday and now has five Olympic golds -- a number he celebrated by hitting the ground and doing five push-ups a few metres past the finish line.

Bolt, who has long considered the 200 his favourite event, will try to make it 6-for-6 at the Olympics in the 4x100 relay, which starts Friday. David Rudisha set a world record to win the Olympic 800 metres title with an overpowering show of front-running.

The Kenyan stole some of the Usain Bolt's thunder at the beginning of a balmy evening suited for setting great times.

Rudisha set off with his giant strides from the starting gun, immediately took the lead and steadily built on it, as many of the year's greatest middle distance runners could never even get close.

Immediately, he lifted his arms in victory as the time flashed just next to him and the 80,000-capacity crowds at the Olympic Stadium erupted in wild cheers, celebrating the first world record of the track and field program.

In the stands, chief Olympic organiser Seb Coe and IAAF president Lamine Diack were shaking hands to celebrate the success. 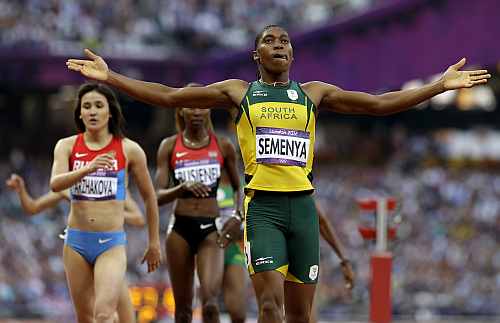 In the women's 800, Kenyan compatriot and defending champion Pamela Jelimo of Kenya easily advanced into Saturday's final along with other semi-final heat winners, World champion Mariya Savinova of Russia and 2009 champion Caster Semenya of South Africa.

Rudisha's record run only added to the excitement of another big day on the track.

Pistorius back in Olympics after relay appeal 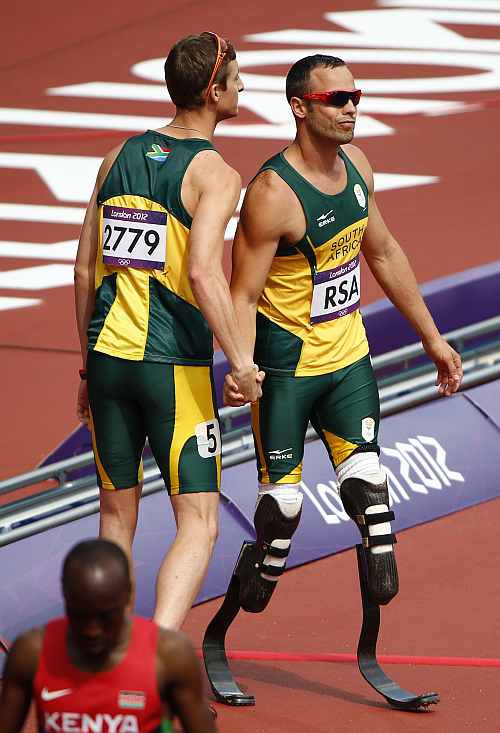 A simple 4x400-metre relay heat turned into high drama when South Africa first crashed out of the race with Pistorius waiting for a baton that never arrived in the changeover zone.

Almost two hours later, a jury of appeal surprisingly ruled to give Pistorius's team Lane 9 -- which otherwise would have been vacant -- in Friday's final because it could not be blamed for the collision with Kenya.

South Africa won a silver medal at last year's world championships and now has a chance at an Olympic medal.

First, the South African team never made it to the third section of the 4x400-metre relay in the opening heat after Mogawane crashed, leaving Pistorius no chance to run.

When he realized the race was lost, Pistorius raised his hands to his head, and waved his arms down in frustration. "It's not the place you want something like this to happen," Pistorius said.

The judges later ruled that Kenya's Vincent Kiilu had cut across Mogawane, causing the collision and leaving the South African with a dislocated shoulder.

It seemed Pistorius had run his last race in London, until the surprising ruling was announced.

"The Jury of Appeal met and agreed to advance the South African team to the final, even though they did not finish the race, considering that they had been severely damaged in the incident with Kenya," the IAAF said in a statement. "South Africa will run as an additional team in lane 9." 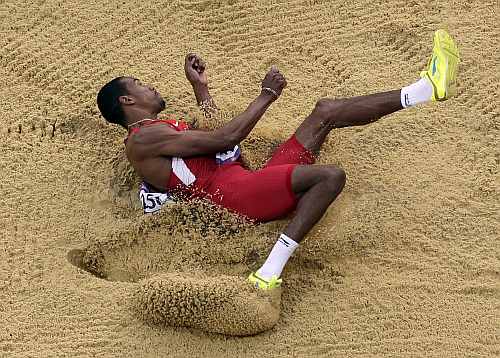 Taylor, the world champion, earned the Olympic title with a best jump of 17.81 metres.

Claye, the world indoor champion who had already won a bronze medal in the long jump at the London Games, earned silver in 17.62.