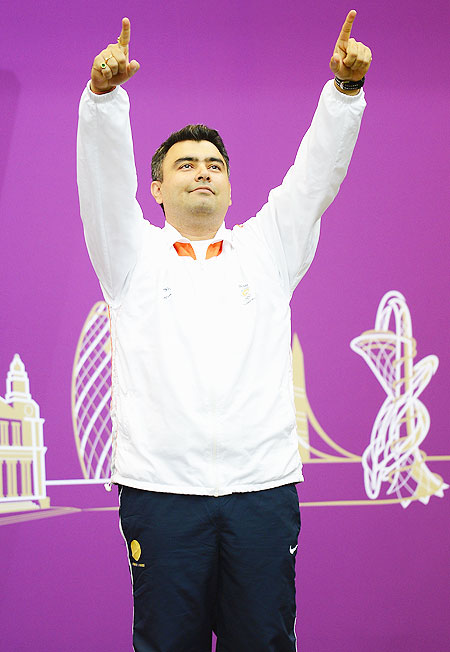 The Olympic bronze he scooped from shooting, the first for India in the London Games, was celebrated across the nation but Gagan Narang's mother was disappointed as she was expecting a gold medal, the shooter said on his return to the country.

"She wanted me to win the gold medal. I hope to fulfill her wish in the future," said the star rifle shooter at a felicitation ceremony here after arriving from London to a rousing reception.

Narang was felicitated at the Gun for Glory academy by Maharashtra Sports and Youth Welfare Minister Padmakar Valvi.

Woman shooter Rahi Sarnobat, who was part of the London Games shooting squad, was also honoured.

Narang, who won a bronze in the men's 10m air rifle, wants woman boxer MC Mary Kom to do what he missed out in the Games, a gold medal.

"I met her in London and she sounded very confident. I hope she brings the yellow medal for all of us," he said ahead of Mary's semi-final bout today against Nicola Adams of Great Britain.

'I was lucky enough to hold my nerves and shoot 10.7 in the last shot' 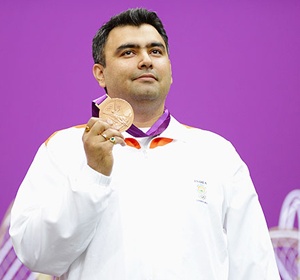 Narang, a seasoned shooter and a multiple gold medal winner at the Commonwealth Games and the star of the 2010 Delhi extravaganza said he felt a bit anxious during his event in London and used his coach Stanislas Lapidus's iPad to settle his jangled nerves.

"I felt a tad bit nervous. Hence, I started half an hour late. My coach made me play a 'secret' game on his iPad. I stepped back from my mark, relaxed, and checked everything before shooting again.

"I was really pleased at having qualified for the finals. A huge weight off my shoulders. In the finals, I was lucky enough to hold my nerves and shoot 10.7 in the last shot when I needed 10.2 to win the bronze medal," said the shooter whose home is in Hyderabad.

Praising India's performance in the ongoing Olympics, Narang said that there is no reason why the country can't become a sporting powerhouse.

"It is a gradual process. Sporting culture is needed where marks are given to students for sports in schools, jobs are assured for sportsperson and sponsors are willing to support them through rough times.

"We have picked momentum and are moving in the right direction. It began with RVS Rathore's silver in Athens, Bindra's gold and two bronze in Beijing and four medals here. It is an encouraging sign." 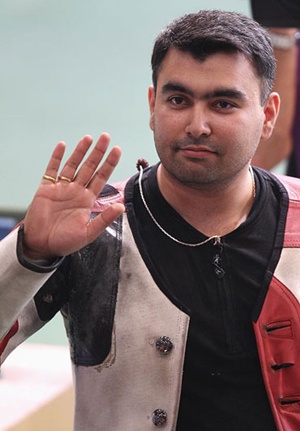 He felt that the medals should inspire athletes who should strive to achieve better results in the future.

Commenting on the impact of sports, Narang said: "One thing that takes the country forward without war is sports."

Thanking the Indian government for spending considerably on the shooters, the champion said, "Shooting is an expensive game. Not everyone can afford it. With the active involvement of the government we can produce more medal winners.

Praising the two state governments of Haryana and Maharashtra, Narang said they have set examples for other states to improve and develop sports infrastructure.

Heaping praise on the national coaches and rifle coach Lapidus, he said that it would not have been possible for him to win the medal without their support.

The former world champion said that it was possible for India to take long strides in shooting provided the youngsters are given proper guidance and get continuous support of the government.

Narang's parents were also felicitated on the occasion, along with Rahi's.
© Copyright 2021 PTI. All rights reserved. Republication or redistribution of PTI content, including by framing or similar means, is expressly prohibited without the prior written consent.