Sign in  |  Create a Rediffmail account
Rediff.com  » Sports » I have had to toil my way into the Olympics: Vijender

I have had to toil my way into the Olympics: Vijender 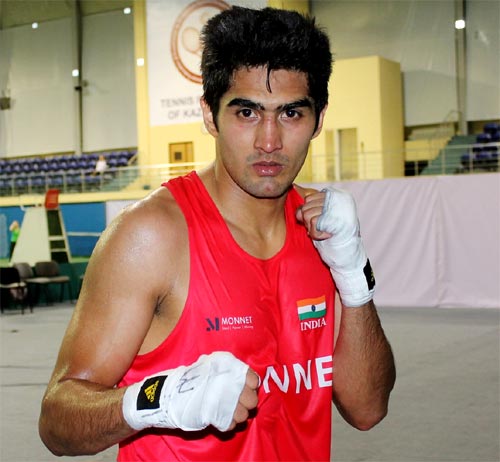 August 20, the year 2008 can very well be considered a turning point in the history of Indian boxing. A bronze medal at the Beijing Olympics -- the first by an Indian boxer -- put India on the boxing map of the world.

But there was more; another bronze, another first, this time at the 2009 AIBA World Boxing Championship in Milan. And that wasn't the end. There were other achievement to follow and the story still continues as London beckons...

Vijender Singh Beniwal has since become a household name and the poster boy of the sport in the country. In more than one way he has contributed greatly towards the growth and popularity of boxing in India. He has paved the way for future generations and given Indian pugilists the impetus, and belief, of making it big at the global arena.

- I want to be the Sachin Tendulkar of boxing: Vijender

Come August, at the 2012 London Olympics, the 26-year-old from Haryana will look to add another chapter to his growing repute. Before leaving for a training camp in Dublin, Vijender spoke about his journey from humble beginnings in Kalwash village of Bhiwani district to becoming the only Indian boxer who will have the unique distinction of partaking in three Olympics.

'In life nothing comes easy and without struggle' 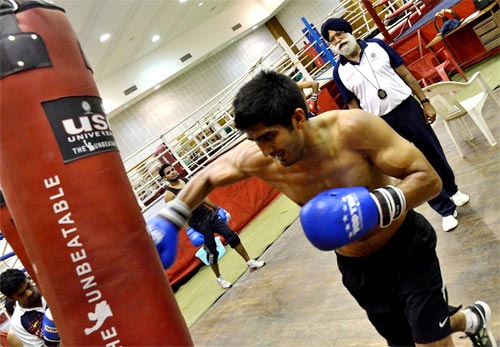 What made you take up boxing as a sport? How difficult, or easy, was it in the beginning for you and your family to deal with this choice?

It has really been a long time since I started [smiling]. It was about 14 to 15 years ago when I picked up boxing, inspired by my elder brother, and I also believe I had the knack for it. You know, in life nothing comes easy and without struggle, but if you keep at it and put in the required hard work, results are bound to flow and that's what I did. I trained with sincerity and passion; I guess that is what has helped me reach where I am.

Tell us a bit about your training at the Bhiwani Boxing Club with Coach Jagdish Singh and how instrumental was that period in your professional career?

Well, Jagdish Singh was my basic coach; he trained me from my very early days in boxing, teaching me the fundamentals of the sport. He was the one who shaped me into a boxer, disciplined me when I required disciplining. He also motivated me when I lost... and in the beginning I lost quite a bit in the sub-junior state and the junior levels.

It was his training that helped me progress and become a professional boxer and start winning at the national level.

The National Championship title was a big win in my career. But that title directly did not help me get selected for the Afro-Asian Games. I was still very young and the coaches were not completely satisfied if I was ready for the senior tour. I had to prove my worth in an invitational national tournament in Goa, where I won the gold medal and along with it the 'Most Promising Boxer' title. That is how I made it to the Afro-Asian Games. 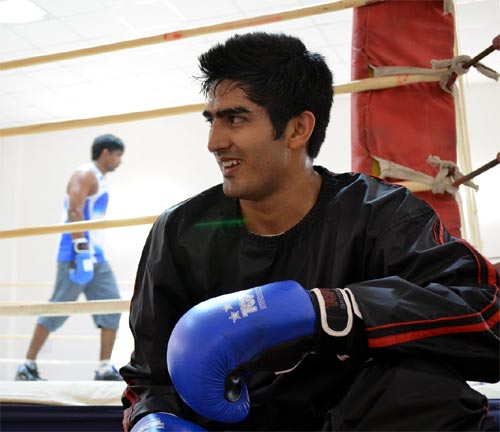 You made it into the senior tour fairly easily and pretty early. What enabled you to make that jump?

It wasn't easy at all; like I said before, I faced a lot of defeats at the beginning of my career. That, in a way, drove me to get better at my game. In a manner of speaking, those early days when I started winning was the turning point in my career.

One tournament in particular at the sub-junior level changed things for me. It was an international competition in Germany. I had worked hard to make a place in the squad and was selected in the B team. I performed really well and beat the top Indian boxer of the A team and some Germans boxers as well. Those victories gave me a lot of confidence and the will to win.

At the 2004 Athens Olympics you were just a teenager. What was the experience like? How did you deal with an early exit? (Lost to Mustafa Karagollu of Turkey 25:20, in the first preliminary round, 64kg)

It was really a big deal for, like you said, I was just a teenager and experiencing the biggest sporting event in the world. I knew very little or nothing about the Olympics. Having qualified was itself a big achievement for me and then being there was quite overwhelming. Although I lost in the opening round, the fact that I fought well was enough for me to take away from Athens. All in all, it was a big learning experience.

The year 2006 was a big stepping stone in your career. You won a silver medal at the Commonwealth Games, gold at the South Asian Games and bronze at the Asian Games. How would you describe that year?How much did it help in your preparation and mental make up for the Beijing Olympics?

[Laughing] Well, that was a special year and I was growing as a young boxer. I was full of aggression and energy, never caring to see who the opponent was, just getting into the ring and boxing. But, yes, those medals and achievements were instrumental in my development as a boxer. I was more confident and a mature athlete after those tournaments.

The Asian Games, in particular, the loss against 2004 Athens Games gold medallist, Kazakhstan's Bakhtiyar Artayev (24:29), was a big inspiration for me. It was a great bout; although I lost, it was by a small margin. I was really appreciated for the kind of fight I put up against a top-class boxer. It was a big morale boost and I was happy with my performance.

'In sport losses are bound to happen' 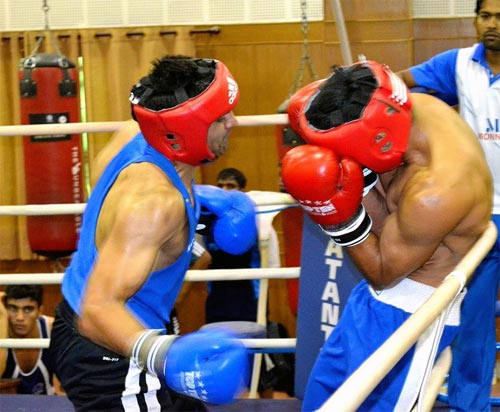 A bronze medal in boxing at the Olympics in 2008 brought about a big change in the sport in India and made you a household name. How was the journey since 2008?

It was a big change for me, the sport and the country's outlook towards the sport. It was the first medal in boxing and we really needed something of that sort for the sport. Even my fellow-boxers' approach changed, everyone started to believe. I think belief makes all the difference. The journey is still going on and with God's grace will have a few more medals to show for.

At the 2010 Commonwealth Games you had to settle for a bronze medal. How big was that semi-final loss for you, considering the penalties you received that were later contested by the IABF?

I did not think much about it once the bout was over. Like they say, whatever God does is for the best. And in sport, losses are bound to happen. It is part and parcel of every game; some you deal with quickly, some take time.

The final bout against Abbos Atoev of Uzbekistan at the Asian Games in Guangzhou... you got injured. Did you consider pulling out after fracturing your thumb in the first round?

I still have the X-ray from that day and it was actually a dislocation, not a fracture. I had no idea what had happened at that time; my left hand had gone numb with pain and I could not use it. I was mostly using my right hand. In a way, though, it really helped because it suited the game that I was playing. Whenever he attacked I side-stepped and counter attacked with my right hand and it worked like a charm. The thought of forfeiting never crossed my mind and in the end it all worked out.

'I think God has it written down for me' 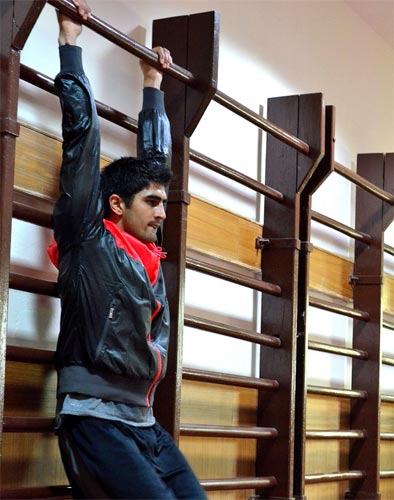 What was the feeling like defeating a world champion and also avenging your 2009 World Championship defeat?

I had beaten him before at the Asian Championships, and so did he, at the Milan World Championships. It's part of the game -- you win some, you lose some! But I guess I have a better (2-1) record against him which gives me the edge.

You are largely considered to be a counter-attacker. Did you have to adapt a lot in your game after the AIBA changed the points system in 2011?

The scoring system might have changed but boxing has not. Whether one is aggressive or sticks to counter-attacks, my aim is to score in any way possible. I am looking to gain points, be it through hooks, body blows, shoulder attacks or punches to the face. My game is more or less still the same.

After the Beijing Olympics and Milan World Championships you were ranked as the number one boxer in your weight category and currently you are not in the top 45 in the world? How effected are you by these rankings?

It is a derivative of your performance in some tournaments, that's how it works.

Qualification for the Olympics has never been easy for you; even this time you made the cut in the last qualification tournament. How pressurized were you?

[Laughing] I think God has it written down for me, that without training and working hard you will never achieve desired results. All three times I have had to toil my way into the Olympics. Talking about pressure, well that is something you have to learn to deal with in sports.

'This is the Olympics; there is no easy or difficult draw' 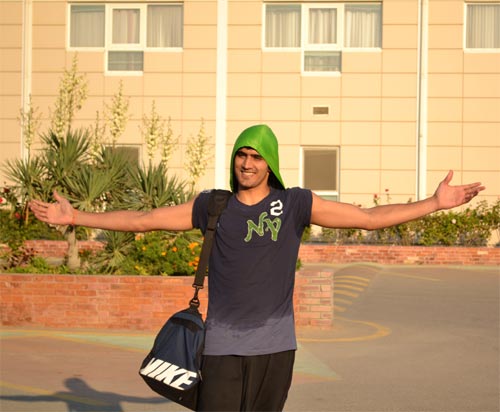 You are the first Indian boxer to make it to three Olympics. How big is this achievement for you?

How well are you prepared for the London Olympics? Can you tell us a bit about your training?

I am happy with my preparations so far. We are training hard for the London Games, focusing on various aspects of the game, which include endurance and speed training. It involves a lot of running and sprinting among other things. Plus, we do weight training, shadow boxing and sparring as well. We are heading for a preparatory training camp in Ireland and later have plans to train in London before the Olympics.

Do you wish for an easy draw at the Olympics, or are you ready to take on anyone?

This is the Olympics; there is no easy or difficult draw. The cream of the boxing world will be there and every boxer will be looking to go all out. So we have to be ready to take on anybody.

You said before the Beijing Olympics that 'I will do something different'. What would you say this time?

[Smiling] I will say the same thing and try to do something different again. I can say this much: I will give my very best and the rest is up to God.