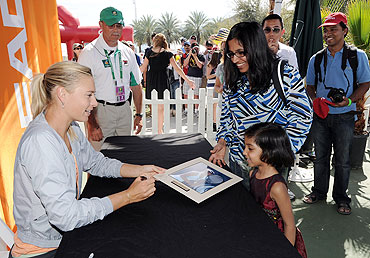 Maria Sharapova's focus on the Indian Wells WTA tournament has been distracted as she keeps a close watch on Japan's struggles to recover from last week's devastating earthquake and tsunami.

Aftershocks and radiation leaks from damaged nuclear power plants in Japan raised fears of a meltdown, a grim development on the 25th anniversary of the Chernobyl nuclear disaster in Sharapova's native Russia.

"It's crazy and something that you can't even prepare for," the former world number one told reporters after overpowering 20th-seeded Frenchwoman Aravane Rezai 6-2, 6-2 in the third round on Monday.

"It happens, and you see the coverage on it and the videos, and it's really incredible that something like that can even happen in the world. Can you believe one disaster 25 years ago? Now another?

"It opens your eyes, and obviously puts a lot of perspective in your life. It's a country where I have very great memories from. I started playing there when I was very young and I always loved my experiences there."

In 2007, Sharapova became a goodwill ambassador for the UN Development Fund and donated $100,000 to help victims of the Chernobyl nuclear disaster.

"In the beginning, my job was raising awareness to the world really," the three-times grand slam singles champion said.

"Even though something like that happened such a long time ago... kids that were born and now are having kids, you also find that they have something in their body that's not allowing them to live a normal life from the pollution."

Sharapova's family left Gomel in Belarus after the Chernobyl accident. She was born in Nyagan in Siberia a year later but left Russia for the United States at the age of nine to study tennis.

The 23-year-old Russian is now based in Bradenton, Florida. Standing in solidarity with Japan who continues to go through its darkest hour, a one-minute silence for the victims of tsunami was observed before the I-League (Round-19) match between Pune FC and ONGC kicked off at the Shiv Chhatrapathi Sports Complex, Pune on Sunday.

While the very thought of both PFC and the AIFF match commissioner was noble, the moment turned out to be touching for PFC's Japanese-born attacking midfielder Izumi Arata, who incidentally initiated the request to his management.

Such was Arata's feelings that he voluntarily announced willingness to help in his best possible way to all those affected by the calamity in Japan.

"If I can be of any support and assistance to anyone suffering it will be my pleasure I do understand the difficult times people face," Arata said.

On the one-minute silence, Arata explained, "Before match-day I requested Chirag (Tanna) if it was possible there was no hesitation to the thought by one and all."

"This disaster had touched him (Arata) and we all felt that this was the least we could do," observed Chirag Tanna, PFC Head of Operations

The 28-year-old added, "The gesture of respect was for people of all nationalities who were affected during this natural calamity."

Hailing from Shimonoseki, Yamaguchi, situated to the south-west of Japan (the earthquake and tsunami struck north-west of Japan), Arata has all his relatives safe.

"They are all fine by God's grace," said Arata, who sat out of the game on Sunday as he is recovering from injury.

After observing the moment, Arata was quick to post a message on his Facebook page which read; "Hey guys..Thanks for your prayer..I am sure your prayers were heard "

"This terrible event has shocked us all and we wanted every nationals of every country to know that the thoughts of the entire Pune Football Club community were with them at this time," added Tanna.

Anyone seeking help can drop Arata a mail to: arata.neel@gmail.com