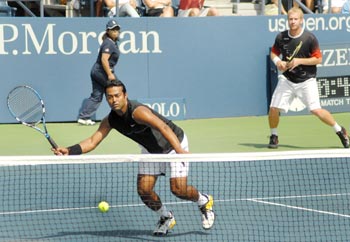 India's Leander Paes and his Czech partner, Lukas Dlouhy, advance into the next round of the US Open.

Seeded No 4, the Indo-Czech pairing got the better of the Austrian combine of Julian Knowle and Jurgen Melzer 7-5, 6-4.

Paes and compatriot Mahesh Bhupathi are heading towards a possible final showdown in both mixed as well as men's doubles event of after winning their respective matches. 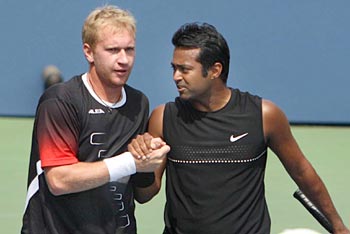 Meanwhile, Paes has also entered the semi-finals of the mixed doubles event.

The Indian ace, paired with Zimbabwe's Cara Black, and seeded second, got the better of seventh seeds Rennae Stubbs of Australia and Robert Lindstedt of Sweden 7-5, 3-6, 10-6.

In the semi-finals, Paes and Black will meet the unseeded pairing of Su-Wei Hsieh of Korea and Kevin Ullyett of Zimbabwe.

Double whammy for Bhupathi as well 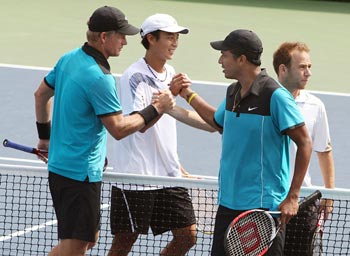 India's Mahesh Bhupathi and Mark Knowles of the Bahamas got the better of Taipei's Yen-Hsun Lu and Israel's Dudi Sela 6-4, 6-4 to advance in the men's doubles.

The No 3 seeds had it easy against their unseeded opponents.

It was a double delight for Bhupathi as he also advanced to the semi-finals of the mixed doubles.

Partnering Liezel Huber of the United States, and seeded No.1, the duo scored an easy victory over eighth seeds Bethanie Mattek-Sands of the US and Nenad Zimonjic of Serbia, winning 6-4, 6-3.

Bhupathi and Huber take on another unseeded pair, Carly Gullickson and Travis Parrott, in the last four. 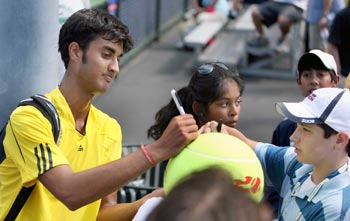 The junior world number one broke his rival twice in the first set and thrice in the second and only once he faced the threat of a break of serve.

He will next clash with Swiss Sandro Ehrat, who beat Patrik Brydolf 6-2, 6-4 in his first round clash.

Yuki is the favorite to win the junior title in New York having already won the Australian Open.

However, India's Sudanwa Sitaram's campaign in the boys' event ended in the first round after he went down fighting 3-6, 6-3, 5-7 against local lad Alexander Domijan.