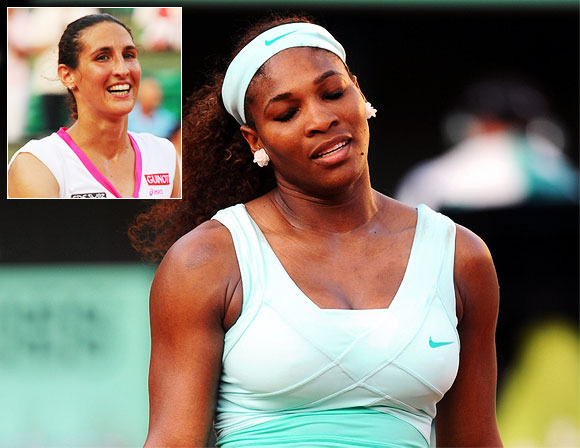 Following Serena Williams's shock exit from the French Open, Bikash Mohapatra looks at some of the biggest upsets at Roland Garros in the last decade.

Serena Williams's shock defeat at the hands of Virginie Razzano happens to be the first time the 13-time major champion lost in the first round of a Grand Slam.

The result also reiterated the fact that the French Open is the most uncertain of the four majors.

Serena had everything going for her.

A spectacular overall record, a title at Roland Garros (in 2002), great form on clay coming into the tournament -- she had won big-ticket events in Charleston and Madrid besides wins over most of her major opponents (Azarenka, Sharapova et al).

Nothing was expected from the 111-ranked Razzano and when the American pocketed the opening set and went ahead 5-1 in the second set tie-break, a regulation win seemed on the cards.

The 29-year-old Frenchwoman then sparked a dramatic turnaround eventually winning the three-hour contest, prevailing on her eighth match point.

Here are some of the biggest upsets at the clay-court slam in the last decade.

Rus handed Clijsters one of her worst defeats 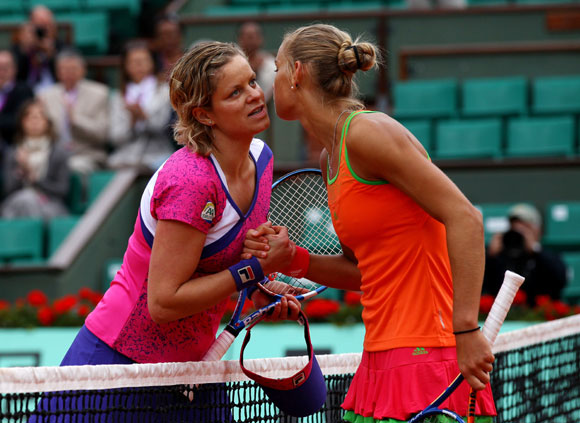 She may share her first name with a three-time champion at Roland Garros but when it came to credentials Arantxa Rus had zilch.

She was ranked a lowly 114th coming into the tournament and struggled to win her opening match (against Marina Erakovic).

The 20-year-old Dutchwoman's 3-6, 7-5, 6-1 win over Kim Clijsters in the second round therefore turned out to be the biggest upset last year.

Clijsters, a two-time finalist at the French Open, had won the previous two majors – the US Open (2010) and the Australian Open (2011), and had two match-points in the second set.

However, the Belgian failed to capitalize on her advantage, losing 11 of the final 12 games and suffering what is arguably one of the worst defeats of her career.

Rus lost in the next round, Russian Maria Kirilenko handing her a 6-1, 6-1 thrashing. 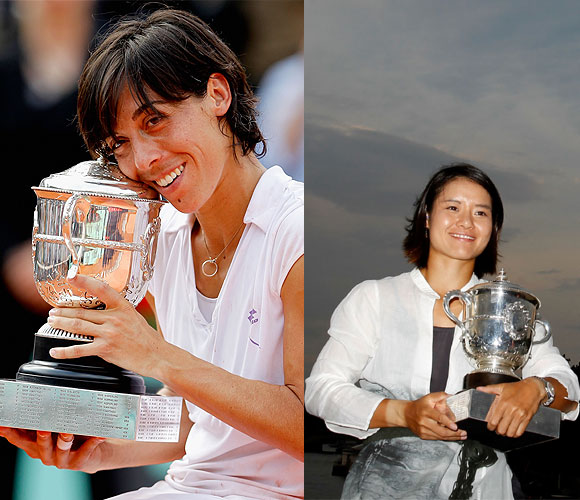 Ahead of the tournament in 2010, no one expected Francesca Schiavone to go all the way.

The Italian was at the twilight of her career and had done precious little when it came to major tournaments.

In 2011, Schiavone returned to defend her title and faced Li Na in the final. The Chinese had proven her prowess on faster surfaces -- making it to the final of the Australian Open that year -- but wasn't expected to do much on the slow clay in Paris.

However, she beat Petra Kvitova, Victoria Azarenka and Maria Sharapova in successive matches before getting it past the defending champion in the final.

Both Li Na and Schiavone have done precious little after that Roland Garros final. 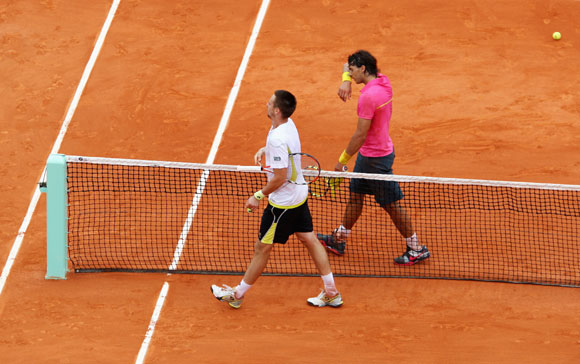 Arguably one of the biggest upsets in men's tennis in recent times.

Rafael Nadal came into the 2009 French Open as the four-time defending champion. He had never lost a singles match in Paris.

As the Spaniard eased into the pre-quarters he seemed destined to become the first player in the open era to win five straight titles at Roland Garros.

His next opponent was a Swede who had no credentials when it came to major tournaments at that point.

The loss ended Nadal's record 31-match winning streak at Roland Garros. The Spaniard was back to his winning ways in Paris the next year and has not lost at the venue since.

However, the loss to Soderling is probably something that he will remember forever.

Safina has done little since that defeat... 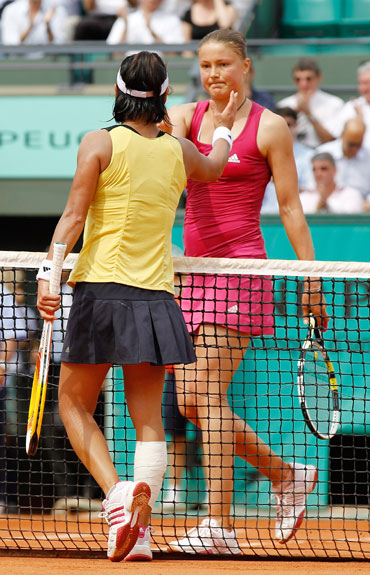 Dinara Safina was a two-time finalist at Roland Garros and looked set to win a major title.

Her opening round opponent in the 2009 French Open was Kimiko Date Krumm. The Japanese veteran, in her late 30s, had spent 12 years in tennis wilderness prior to her comeback a year earlier.

The Russian was ranked No.1 and expected to win easily. However, it was Date Krumm who emerged victorious, winning 3-6, 6-4, 7-5 capitalizing on the ninth seed's woeful serve that witnessed her serving a whopping 17 double faults on the day.

The defeat had a psychological impact on Safina. She has done precious little since.

As regards the Japanese, she lost in the next round.

Gaudio's title triumph was a shocker 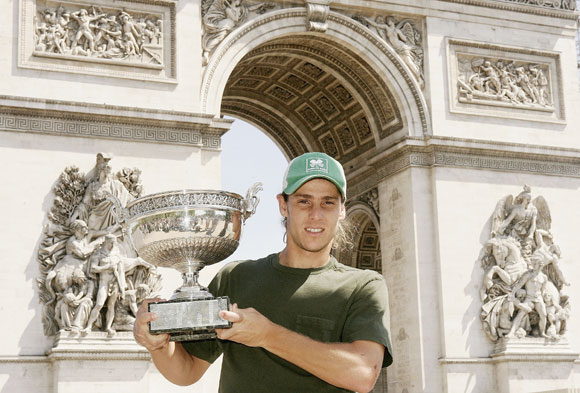 If you don't just scroll through the men's singles champions list at Roland Garros and you will find his name against the year 2004.

Coming into the French Open that year, the Argentine had an appalling 13-13 at major tournaments. He had never gone past the third round in Paris. However, he benefited from other results that year and made all the way to the final.

Gaudio's opponent in the decider was the tournament favourite, countryman Guillermo Coria.

The third seed, a semi-finalist at Roland Garros in the previous year, had come into the tournament riding high on his success at Buenos Aires and Monte Carlo. Besides, he had an enviable 28-7 record in Paris.

It came as no surprise as Coria raced into a two-set lead. 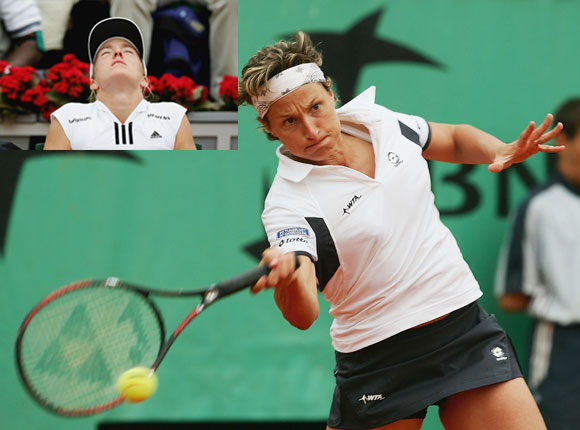 When a list of the best women's players will be made at the French Open, Justine Henin's name will be among the top.

However, among all her wins there's a result that she would always find it difficult to digest.

The Belgian was the defending champion, top seed and favourite, coming into the tournament in 2004.

Having recovered from a chronic illness, she was ready to defend her title. Henin had it easy in her opener but it was in her second round match that she completely lost the plot.

Tathiana Garbin didn't play a spectacular match. However, she was smart enough to benefit from her opponent's frailties.

The Italian held her own as Henin double faulted on 10 occasions, had as amany as 30 unforced errors and failed to convert nine successive break point opportunities.

Garbin won 7-5, 6-4 causing one of the biggest upsets in the tournament's history.