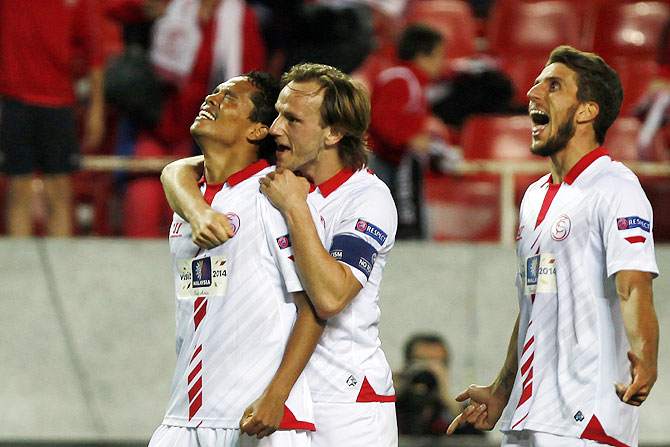 A stunning late goal from Benfica's Lima left Juventus's hopes of reaching a home Europa League final hanging in the balance after a 2-1 first-leg defeat, while Sevilla won 2-0 against Valencia in Thursday's all-Spanish last-four clash.

Benfica scored early through Ezequiel Garay and were resolute in defence for 73 minutes, before Carlos Tevez calmly slotted home to end a European goal-drought stretching back to April 2009 and give the visitors a priceless away goal.

Yet the smiles were wiped off their faces with a flash of Lima's right boot as the Brazilian forward arrived late in the penalty area to drill the ball into the top corner and put the hosts ahead in the tie heading into next week's return leg in Turin, where the showpiece final will also take place on May 14. 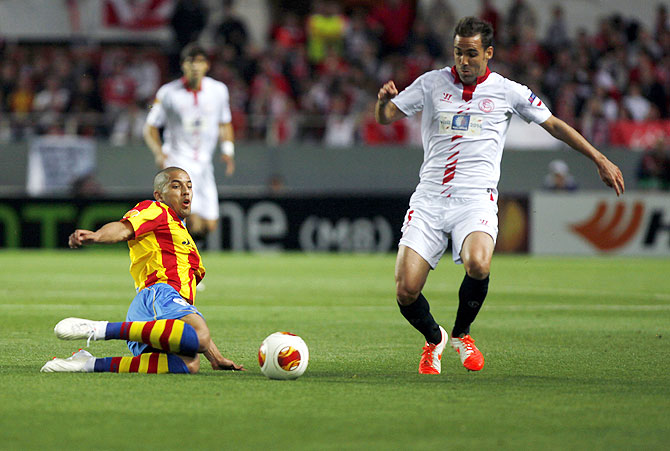 Sevilla took the lead with an improvised backheel from Stephane Mbia in the 33rd minute of their clash with La Liga rivals Valencia and doubled their advantage three minutes later through Carlos Bacca.

Sevilla coach Unai Emery knew opponents Valencia inside-out having managed them for four years until 2012, and while his team got off to a slow start they grabbed the lead with a piece of improvisation from Mbia.

The midfielder got his legs in a tangle trying to control Ivan Rakitic's inswinging free kick, but showed sharp instincts to backheel the ball into the net from close range.

If that was scrappy, the second goal came from an incisive break with Bacca playing a one-two with Vitolo before surging past the Valencia rearguard and coolly slotting home.

The only sour note for Sevilla was their failure to increase their advantage and bury Valencia in the tie with Federico Fazio missing two good headed chances either side of halftime.

Valencia are no strangers to dramatic second-leg comebacks having overturned a 3-0 reverse against Basel in the last round.

'It was a great game, a game of champions' 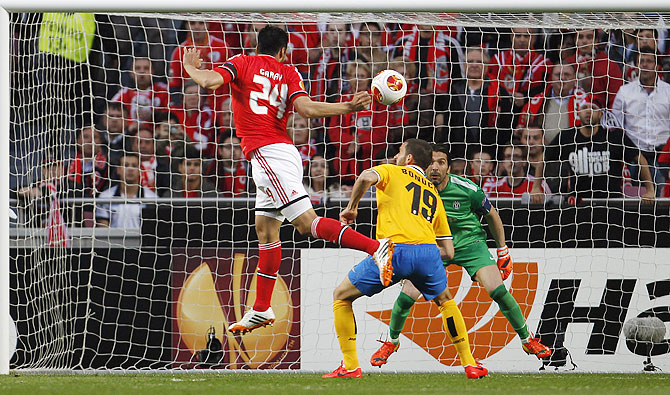 Pitching the newly-crowned Portuguese champions against a Juventus side blazing a trail in Serie A, the match in Lisbon promised entertainment but delivered a typically cagey opening to a European first-leg clash.

"It was a great game, a game of champions," said Benfica coach Jorge Jesus.

"We knew we had to be perfect defensively, we were almost there. Their goal was a great individual play by Tevez. But this is the first defeat of Juventus in the Europa League."

Benfica were unbeaten in 12 home European encounters and were quick out of the traps, snatching the lead when Garay was allowed to leap unchallenged to head Miralem Sulejmani's corner powerfully past a scrambling Gianluigi Buffon.

While the Italians were caught cold they swiftly recovered their composure and took the sting out of the tie by hogging possession and restricting space for the Benfica attackers.

'The important thing is that the tie is still alive' 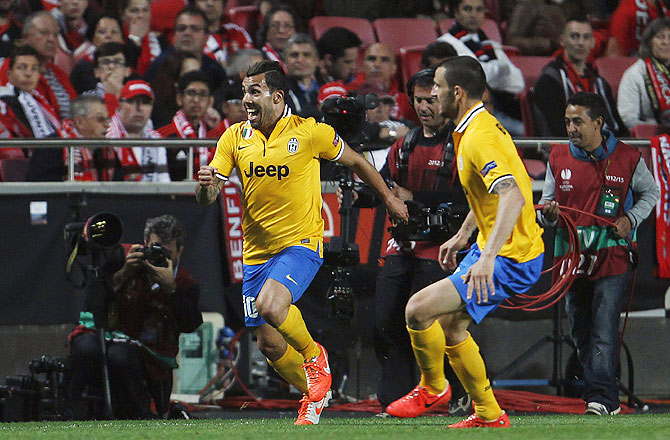 It all looked to be going to plan when Tevez kept his head and his footing to ride a challenge in the Benfica area and sidefoot beneath keeper Artur for his first European goal since scoring for Manchester United against Porto five years ago.

The away goal had put the visitors firmly in the box seat, but Lima's crunching 84th-minute piledriver means they will have win the return leg to have a chance of reaching final in their home stadium.

"The fact that I scored is not important, the important thing is that the tie is still alive," Juve's Tevez said.

"We still have 90 minutes to play and Juve can do it, we have a lot of hope."