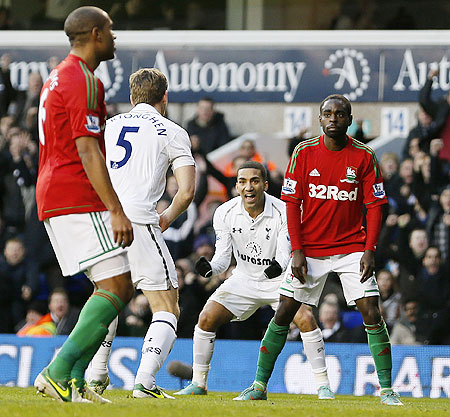 Belgium international Jan Vertonghen broke the deadlock to send Tottenham Hotspur back into the top four of the Premier League with a 1-0 home win against Swansea City on Sunday.

The former Ajax defender scored in the 75th minute at White Hart Lane with a beautifully-struck right-footed shot after a Kyle Walker free kick from the right was nodded on by the Swansea defence.

Spurs leapfrogged Everton to take fourth place, level on 29 points with third-placed Chelsea who have a game in hand after losing the Club World Cup final in Japan 1-0 to Brazil's Corinthians on Sunday.

Manchester United, who beat Sunderland 3-1 at Old Trafford on Saturday, have 42 points and are six clear of Manchester City at the top of the table.
Tags: Swansea City , Jan Vertonghen , Kyle Walker , Tottenham Hotspur , Hart Lane Spurs, without the injured Gareth Bale but with England midfielder Scott Parker returning as a late substitute for his first appearance of the season after Achilles surgery, enjoyed most of the possession but were frustrated by a flowing Swansea side that proved solid in defence and dangerous on the break.

"We had so many chances, so many opportunities to put the match to bed even earlier," said manager Andre Villas-Boas.

"We were very solid today...it would have been extremely unfair if we hadn't got the win today."

Walker had Tottenham's best chance of the goalless first half in the 40th minute when he blasted the ball at goalkeeper Gerhard Tremmel from 25 metres.

Tremmel had barely time to raise his hands, with the ball ricocheting off his shoulder without Spurs being able to capitalise.
Tags: Gerhard Tremmel , Gareth Bale , Andre Villas-Boas , Scott Parker , Tottenham

Laudrup not happy with refreeing 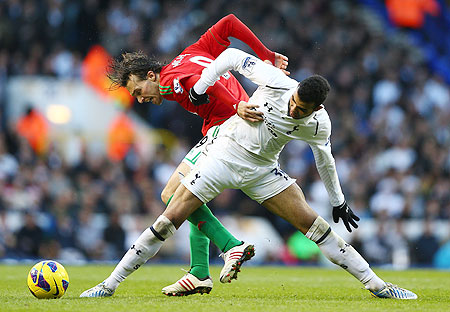 Image: Michu of Swansea City and Sandro of Tottenham Hotspur battle for the ball during their match on Sunday
Photographs: Paul Gilham/Getty Images

Swansea's Michu then tried an opportunistic lob from the halfway line two minutes later that dipped over the bar as Hugo Lloris scrambled back to cover.

The game ended in controversy after Michu was felled by Lloris when the goalkeeper tried to punch the ball clear. With the Swansea player still lying in the area, Tottenham played on to consternation from the visitors.

Swansea manager Michael Laudrup, whose side have not won at White Hart Lane in 15 league games and remain 10th, was critical of referee Mike Dean's delay in halting play while his man was on the ground.

"I was very angry," the Dane told Sky Sports News.

"If two players go up and you see there could be a head injury, then there's only one thing to do: The referee just has to blow the whistle.

"That was poor refereeing... we are talking about maybe a head injury and the referee let the play go on. I think that was a very bad decision," he said, adding that the Spaniard was recovering well. 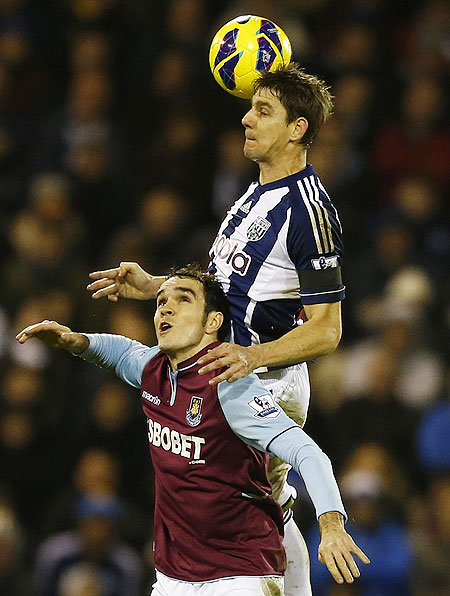 West Bromwich Albion and West Ham United's scoreless draw on Sunday was not one for the purists but the delight expressed by both Premier League teams summed up their modest aims.

West Ham defender James Collins was one who was particularly pleased with the point, telling the club website: "These are the most satisfying games to play in as a centre back."

An inspirational game it was not, but a well executed plan it was from Hammers boss Sam Allardyce.

Struggling with a squad full of injuries with the likes of Andy Carroll, Yossi Benayoun and Mohamed Diame all in the treatment room, it was an opportunity for consolidation for Allardyce who set his team up to sit deep and absorb West Brom's pressure.

'The lads did us proud' 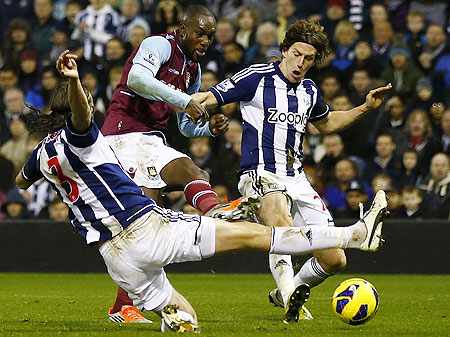 Match statistics gave a clearer picture of proceedings as hosts West Brom had 10 shots out of 19 on target, while the visitors saw only two hit the mark.

"When you pick up a point with seven of your first team missing that is very pleasing. The lads who went out there did us proud and picked up a precious point," Allardyce told BBC Sport.

After suffering three successive defeats it was also a time for consolidation for Baggies manager Steve Clarke, who took plenty of positives away from the match.

"We spoke before the game about how it was important for us to defend well today and aim for the clean sheet, which we got," Clarke told West Brom's website.

"That's good because we haven't had a clean sheet for a little while. That is one positive aspect.

"It does stop the run of defeats, which is another positive aspect. And it's another point towards the total we're trying to achieve."
Tags: West Brom , Steve Clarke , BBC Sport , Allardyce , Baggies
More
Source: