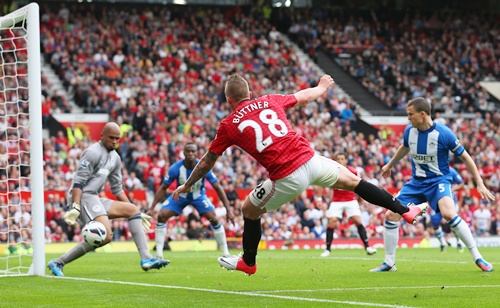 Manchester United and Arsenal enjoyed emphatic home wins over Wigan Athletic and Southampton respectively on Saturday to join Chelsea and Manchester City in the top four and give the Premier League table a familiar feel.

United beat Wigan 4-0 at Old Trafford, with Paul Scholes among the scorers on his 700th appearance for the club, while Arsenal hammered Southampton 6-1 at the Emirates to hand the promoted side a fourth straight defeat leaving them bottom.

Chelsea and City failed to win but the European champions stayed top after the west London derby at Queens Park Rangers finished in a 0-0 stalemate ending their 100 percent record. 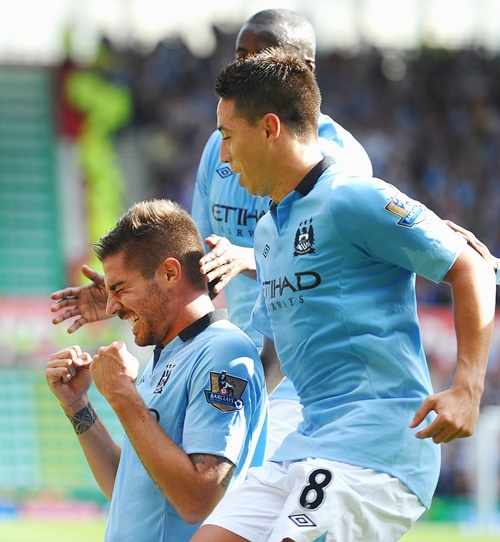 Champions Manchester City also dropped points in a 1-1 draw at Stoke City where Peter Crouch put the home side ahead with the use of his arm before Spaniard Javi Garcia replied with a debut strike.

City manager Roberto Mancini was upset Crouch's goal was allowed to stand, saying: "If we talk about their goal, it was not football but basketball, I don't know how it was possible that the referee did not see it".

We are still on top at the moment: Di Matteo 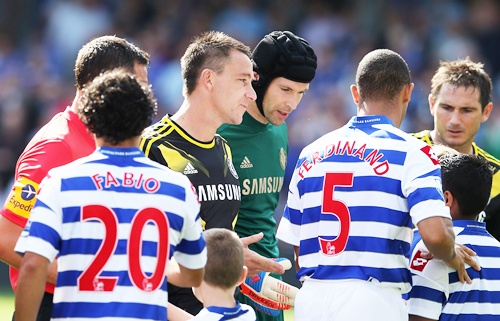 The build-up to the match at Loftus Road was overshadowed by whether QPR's Anton Ferdinand would shake hands with Chelsea's John Terry and Ashley Cole after Terry was cleared in court of racially abusing Ferdinand in the same fixture last season.

Cole defended his team mate in the court case in July, and in the event Ferdinand snubbed them both while the visiting players were given a torrid afternoon by the home fans.

Both teams had chances to win until the dying moments and Chelsea manager Roberto di Matteo said he was pleased to leave with a point.

"For us, Loftus Road is a very difficult ground because of the history between the clubs but we will take a point, and we are still top at the moment," said the Italian.

There is no-one better at doing what Scholes did today: Ferguson 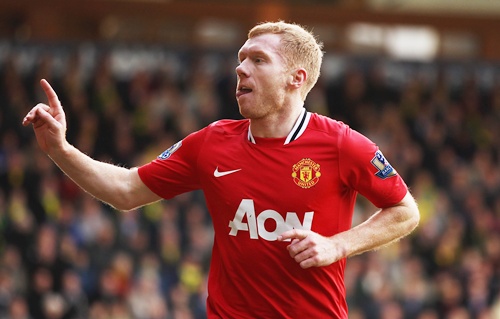 United closed to within a point of Chelsea with victory over Wigan but they struggled at first and missed the chance to take the lead in the third minute when they got a fortunate penalty.

The referee ruled Danny Welbeck was felled by Wigan keeper Ali Al Habsi but the United striker appeared to have dived to win the spot kick which Javier Hernandez missed.

It took United until the 51st minute to take the lead when Scholes scored, before Hernandez made it 2-0 and debutants Alex Buttner and Nick Powell completed the rout on a red-letter day for the club.

As well as Scholes making his 700th United appearance, Ryan Giggs was playing his 600th Premier League match and Rio Ferdinand featured for the club for the 400th time.

United manager Alex Ferguson was unhappy with their first-half performance but they were much better after the break.

"We were far more aggressive ourselves in the second half in terms of getting to the ball," he told Sky Sports.

He also praised Scholes saying, "there is no-one better at doing what he did today." 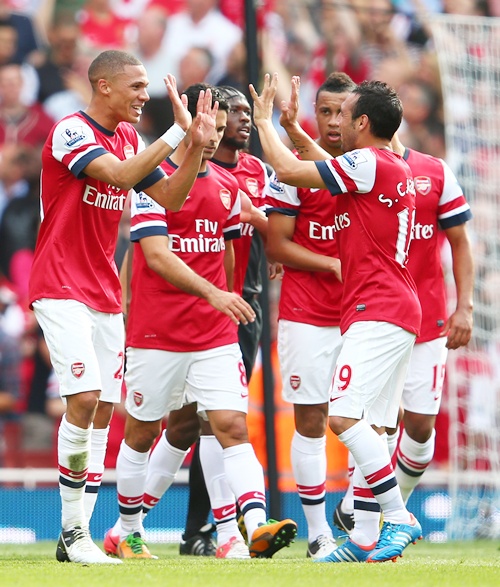 Arsenal also had a thumping win after playing superbly, especially in the first half when they established a 4-0 lead over Southampton thanks to goals from Lukas Podolski and Gervinho and own goals from Jos Hooiveld and Nathaniel Clyne.

Although Daniel Fox pulled one back for Southampton just before the break, Gervinho added his second and Theo Walcott also scored against his old club to complete the rout.

Swansea City, who started the day in second place, slipped to fifth after losing 2-0 at Aston Villa where Paul Lambert won for the first time as the team's new manager.

West Bromwich Albion, third at the start, lost 3-0 at Fulham where Dimitar Berbatov scored twice, including a penalty, and the visitors had Peter Odemwingie sent off in the first half.