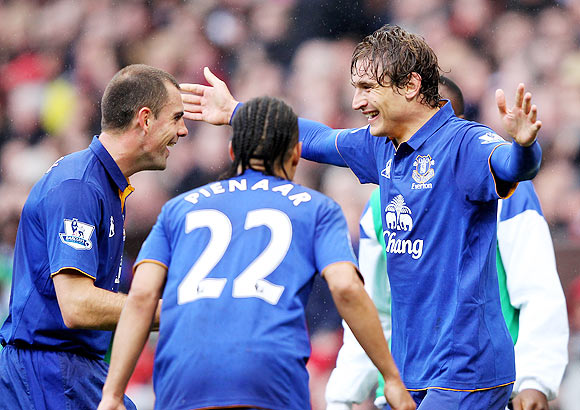 The Premier League title race took another dramatic twist on Sunday when leaders Manchester United blew a two-goal lead to draw 4-4 with Everton and Manchester City beat Wolverhampton Wanderers 2-0 to narrow the gap to three points.

Wolves were relegated after losing to City who will go top of the standings if they beat United in the Manchester derby at the Etihad Stadium next Monday.

United, who led Everton 4-2 with seven minutes remaining at Old Trafford, head the standings on 83 points, three ahead of City who have a better goal difference with three games of the season left. 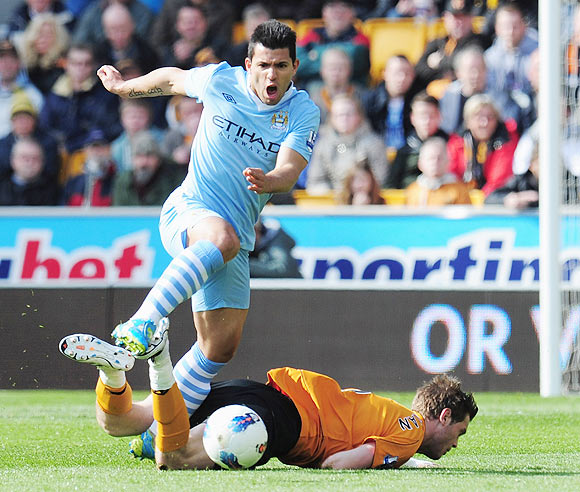 City's victory at Molineux, secured with goals from Sergio Aguero and Samir Nasri, condemned Wolves to the Championship (second tier) after three seasons in the top flight.

United, who trailed to Nikica's Jelavic's 33rd-minute header, looked set to open a temporary eight-point advantage over City when they led Everton 3-1 and 4-2 thanks to two goals from Wayne Rooney against his old club and one each for Danny Welbeck and Nani.

But Marouane Fellaini's volley gave Everton a lifeline at 3-2 and Jelavic and Steven Pienaar struck twice in two minutes to earn their team a deserved point.

In Sunday's other game, former Liverpool manager Roy Hodgson enjoyed his first return to Anfield since leaving the club in 2011 by leading West Bromwich Albion to a 1-0 victory.

The only goal, from the prolific Peter Odemwingie, earned West Brom their first win at Anfield for 45 years and lifted them into the top half of the table. 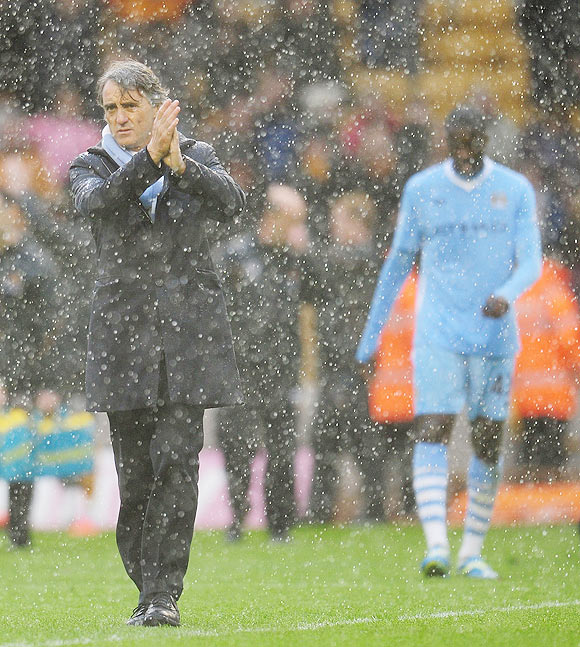 City led the table for five months but their defeat at Arsenal two weeks ago left them eight points behind United.

Now, if they beat their neighbours next week, they will go top on goal difference but manager Roberto Mancini remained in cautious mood.

Asked if he felt the title race was still over, he told Sky Sports: "Probably, yes. I think three points is too much. We have very difficult games and United, after us, have two games not as difficult as us."

United manager Alex Ferguson told Sky that the next game was shaping up as the most important Manchester derby in his 25 years at the club. 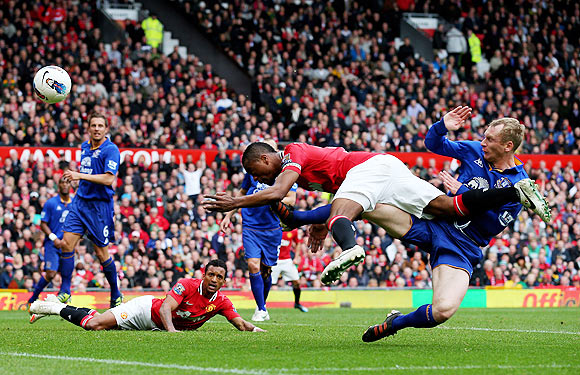 "We've given them the initiative, there is no question about that, and it makes the game at the Etihad the decider really," Ferguson said.

"We have made it hard for ourselves, but we have to go there knowing we are capable of getting a result.

"There is no reason we can't do that. There has been an expectancy that this is City's decider, but it's our decider too. It's the most important derby. Game On."

He was unhappy with his team's defending.

"I thought it was a travesty we did not see the game out. Some of our goals were great goals and some of our football was fantastic today and I can't believe we've let in four goals at Old Trafford in a game as important as that.

"Defensive lapses cost us and we gave away some soft goals." 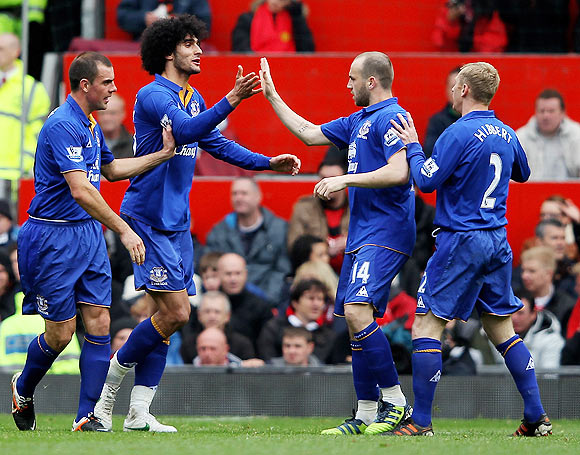 Everton manager David Moyes was ecstatic that his side had avoided defeat after losing to Liverpool in the FA Cup semi-finals last weekend.

"We were absolutely brilliant. We came here trying to win the game and get a result," Moyes said. "We were down after losing last week and had the chance today to do well and stop people thinking our season was over."

Everton opened the scoring through Jelavic's excellent header but they trailed 3-1 as United stormed back with a header from Rooney, a superb curling shot from Welbeck and a dink over former United goalkeeper Tim Howard by Nani after great build-up play.

Fellaini made it 3-2 with an unstoppable volley before Rooney struck with a low shot and United defender Patrice Evra hit the post before Jelavic and Pienaar silenced the home crowd.

There was still drama to come in the final minute of stoppage time as Howard denied his old club a winner with a superb diving save from Rio Ferdinand's fierce shot.