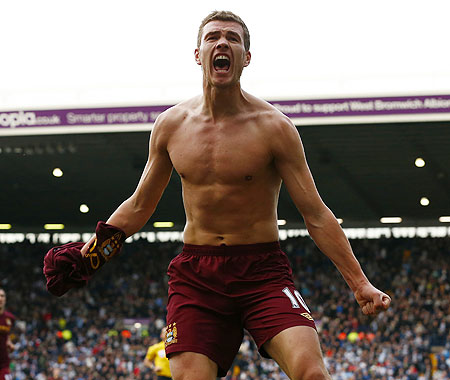 The goals keep coming for Lionel Messi who scored his 15th La Liga hat-trick as Barcelona edged a nine-goal thriller at Deportivo Coruna.

Premier League champions Manchester City had Edin Dzeko to thank for their late comeback against West Bromwich Albion with the substitute scoring twice in the 2-1 win.

Manchester City's Edin Dzeko came off the bench to score twice as the Premier League champions left it late to come from behind and beat West Bromwich Albion 2-1 to keep up the pressure on league leaders Chelsea.

City looked in deep trouble when they trailed 1-0 to Shane Long's goal having also had winger James Milner sent off, but the Bosnian rode to their rescue, equalising with a header and finishing off a breakaway in stoppage time.

Wayne Rooney netted twice for Manchester United on an eventful afternoon in which he also scored an own goal in a 4-2 victory over Stoke City.

Both United and City are four points behind Chelsea who secured their seventh victory in eight Premier League games with a 4-2 win at Tottenham Hotspur that included two goals from Spaniard Juan Mata.

Two English Premier League matches on Sunday ended in 1-1 draws featuring an own goal and a red card as Sunderland drew with Newcastle United at the Stadium of Light while Queens Park Rangers and Everton also drew at Loftus Road. Messi netted three in 10-man Barca's entertaining 5-4 win at Deportivo Coruna, Falcao curled in a late winner for Atletico in a 1-0 success at Real Sociedad and Ronaldo scored a penalty in the drab 2-0 win for Real at home to Celta Vigo.

Barca and Atletico lead on 22 points, with the Catalan club ahead on goal difference, Malaga are third on 17 points after beating Real Valladolid 2-1 and Real, who are clawing their way up the table after a poor start to the defence of their title, are fourth on 14.

Lazio, Inter move within a point of Napoli 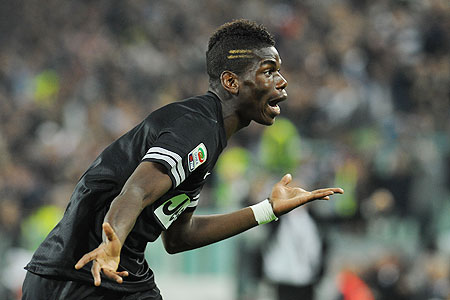 Martin Caceres and Paul Pogba scored in the last 10 minutes to give Juventus a 2-0 win over Napoli in the top-of-the-table Serie A clash. The titleholders have 22 points from eight games, three ahead of Napoli, and extended their unbeaten league run to 47 matches.

Lazio and Inter both won and moved within a point of Napoli.

Lazio beat struggling AC Milan 3-2 with Hernanes, Antonio Candeva and Miroslav Klose putting them three ahead before Nigel de Jong and Stephan El Shaaraway made the score more respectable for Milan, who have lost five out of their eight games. Leaders Bayern Munich set a Bundesliga record for the best start to a season with their eighth successive win, crushing promoted Fortuna Duesseldorf 5-0 away.

Titleholders Borussia Dortmund slumped to a 2-1 home defeat to rivals Schalke 04, in a match marred by fan trouble. Ibrahim Afellay and Marco Hoeger put Schalke 2-0 ahead before Robert Lewandowski pulled one back.

Schalke are third with 17 points while Dortmund are fourth but are already 12 points behind Bayern. 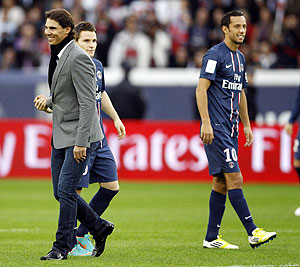 PSG have 19 points but are ahead on goal difference from Olympique Marseille, who dropped to second place after they lost 1-0 at Troyes.