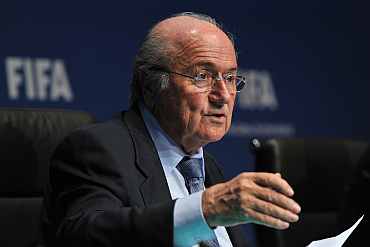 Embattled FIFA president Sepp Blatter apologised for his controversial comments about racism on Friday but said he would not be resigning despite a growing clamour in Britain for him to step down.

"It hurts and I am still hurting because I couldn't envisage such a reaction," the 75-year-old head of world soccer's governing body said in a BBC interview.

"When you have done something which was not totally correct, I can only say I am sorry for all those people affected by my declarations," he added.

Blatter sparked outrage, most notably in England where the FA is dealing with two high-profile racism allegations, when he said Wednesday that incidents of racist abuse on the pitch should be settled with a handshake after the game.

His comments were criticised by players such as England defender Rio Ferdinand and former captain David Beckham and even brought a stinging rebuke from Prime Minister David Cameron, who described them as "appalling." 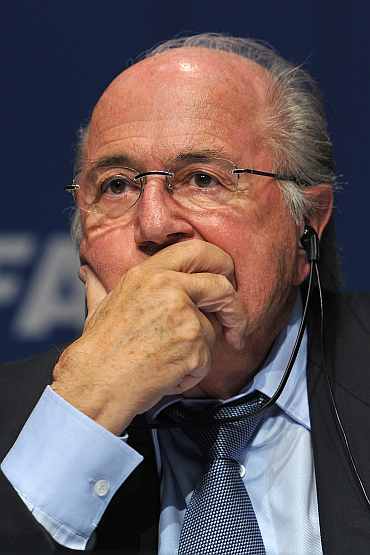 However, Blatter said he would not quit over the remarks which have provoked back page headlines in the newspapers such as "Go Now Blatter" and "Now He Must Go."

"It's a serious incident, you cannot say it's not serious but we have to go on, I have to go on. Let's just see what is the reaction. This situation can only make us stronger by uniting us," added Blatter, who said FIFA has a "zero tolerance" attitude to racism.

'There is no racism' 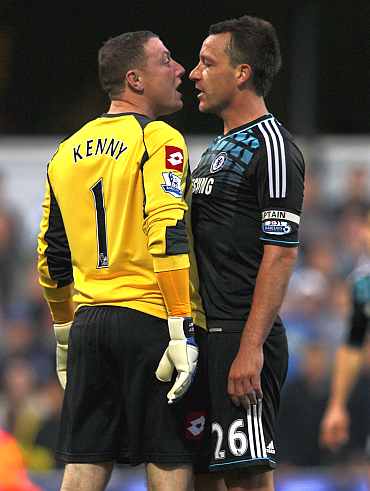 The latest controversy surrounding the long-standing FIFA president erupted Wednesday when in two separate television interviews he suggested racism in football was not a problem.

Asked by CNN if there was racism in the game, Blatter said: "I would deny it. There is no racism, there is maybe one of the players towards another, he has a word or a gesture, which is not the correct one.

"But also the one who is affected by that, he should say that this is a game. We are in a game, and at the end of the game, we shake hands." 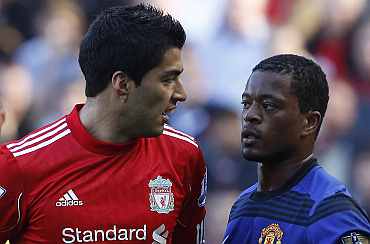 His remarks provoked disbelief from Ferdinand, whose brother Anton is at the centre of a police probe after England and Chelsea captain John Terry was accused of racist abuse towards the Queen Park Rangers player during a recent Premier League game.

Liverpool's Luis Suarez, who like Terry denies wrongdoing, has been charged over alleged racist insults towards Manchester United's Patrice Evra.

Manchester United defender Rio was involved in a Twitter exchange with Blatter Thursday, suggesting FIFA had tried to limit the damage by posting a photo of its president posing with South African government official Tokyo Sexwale, who has worked with FIFA on anti-racism initiatives.

Sexwale, who is the Minister of Human Settlements in South Africa, said Blatter's comments had been "unfortunate." "It is important that such conduct is rooted out from the field of play without any equivocation," he said.

"No handshakes repair these things, the exchange of jerseys doesn't take it away. "I think what Mr Blatter was saying he mixed up all those emotions and was quick to say let's get on with the game.

"I think this mistake has come at the right time because he has inadvertently raised the bar and the attention about racism and discrimination on the pitch."

Beckham added his weight to the debate 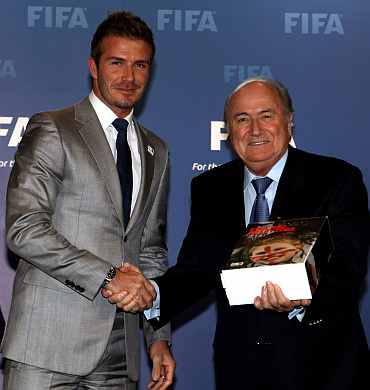 "I think the comments were appalling," Beckham told an LA Galaxy news conference.

"I think a lot of people have said that. I don't think the comments were very good for this game...(racism) is still there and can't just be swept under the carpet."

Blatter, whose organisation has been beset by corruption allegations in the recent past, has made a series of gaffes over the years.

He once called on women players to wear skimpier kits and upset homosexuals by saying they should not engage in sexual relations at the 2022 Qatar World Cup.

The Swiss also said England were "bad losers" after they missed out on hosting the 2018 World Cup to Russia.

The latest furore over Blatter, re-elected unopposed this year after a rival pulled out amid corruption allegations, has barely got a mention in other European media outside of Britain but has been reported in the United States.