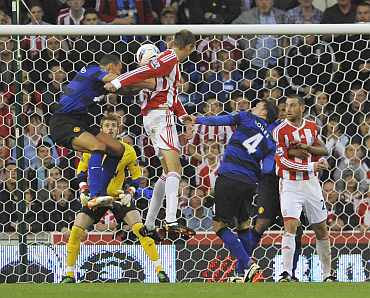 Manchester United dropped their first points of the season in a 1-1 draw at Stoke City on Saturday but ended the day top of the Premier League while Chelsea striker Fernando Torres scored and was sent off in his side's 4-1 win over Swansea City.

Manchester City temporarily led the standings after winning their lunchtime kickoff 2-0 against Everton at the Etihad Stadium, but United went back to the summit despite only drawing their evening game at the Britannia Stadium.

United and City both have 16 points from six matches with last season's champions ahead on goal difference.

United led at Stoke with a first half goal from Nani but were pegged back when Peter Crouch headed home a corner. City overcame Everton with goals from second-half substitutes Mario Balotelli and James Milner. 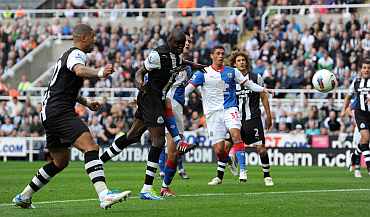 Chelsea stayed third after brushing aside Swansea at Stamford Bridge where their record 50 million signing Torres scored and was sent off within 10 minutes in the first half, dismissed with an instant red card after a flying lunge at Swansea's Mark Gower.

Ramires scored twice for Chelsea and Didier Drogba the other on his return from injury.

Newcastle United maintained their unbeaten start and stayed fourth with Senegal international Demba Ba scoring a hat-trick in their 3-1 home win over Blackburn Rovers who finished with 10 men after Martin Olsson was sent off.

Liverpool moved up to fifth after beating Wolverhampton Wanderers 2-1 at Anfield where a Roger Johnson own goal after 11 minutes and a second from Luis Suarez after 38 gave the hosts the points. Steven Fletcher pulled one back for Wolves. 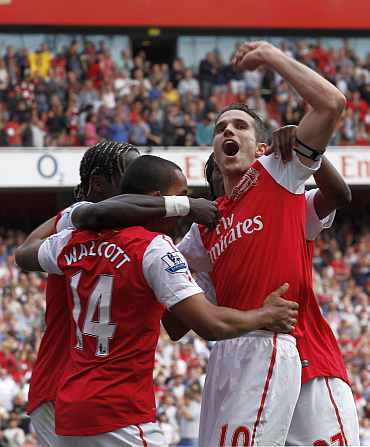 Tottenham Hotspur, who lost their opening two league matches to United and City and were bottom of the table two weeks ago, climbed to sixth with their third straight league victory, winning 2-1 at Wigan Athletic.

Arsenal, struggling at the wrong end of the table after their worst start for 58 years, moved up five places to 12th with a 3-0 win over Bolton Wanderers. 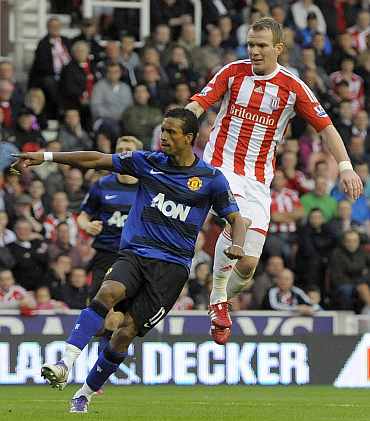 United, who had won all six league matches between the sides since Stoke gained promotion to the Premier League in 2008, took the lead with a well-struck drive from Nani after 27 minutes, but Alex Ferguson's side, without striker Wayne Rooney who was suffering a hamstring strain, never gained total control.

They paid for that after 52 minutes when Stoke equalised with a Crouch header, his first goal for the club since his 9.0 million transfer from Spurs last month. The lanky England striker could have scored three while Ryan Giggs wasted a great chance to win it for the visitors in stoppage time.

It was Crouch's first league goal against United in his 11-year career and he told ESPN: "It's always great to score your first goal for a new club and to score it against United is really pleasing for me.

"We worked so hard, I've never known a team spirit like it to be honest, I've been at a few clubs now and the willingness to work is amazing -- that's why we got the result today." 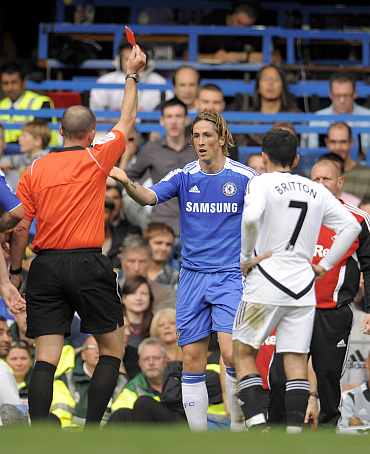 Although Chelsea ended up beating promoted Swansea conclusively at Stamford Bridge, they had to do so with 10 men after their Spanish international striker Torres had another "hero to zero" afternoon.

Last Sunday he scored a stunning first goal of the season against United at Old Trafford, but then missed an open goal, which would have put Chelsea back into the game.

On Saturday he scored another well taken goal after 29 minutes when he chested down a Juan Mata ball and fired home, but later in the half he was dismissed for flying in on Gower with both feet raised, although there was minimal contact.

By then Chelsea were 2-0 ahead following Ramires' first goal after 36 minutes before he added a third in the second half.

Ashley Williams pulled one back before Drogba, returning after suffering concussion against Norwich City on Aug.27, scored Chelsea's fourth in stoppage time.
Source: