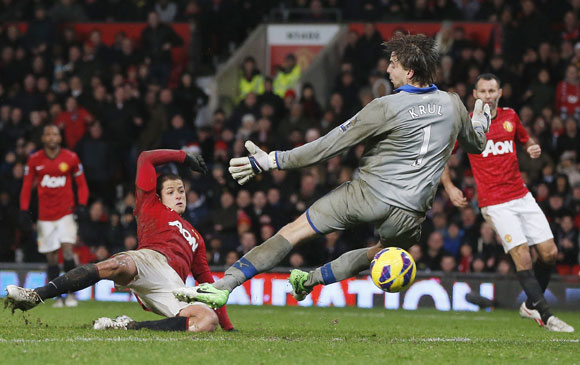 Manchester United trailed three times before a last-gasp goal from Javier Hernandez sealed a rip-roaring 4-3 victory over Newcastle United that opened a seven-point lead at the top of the Premier League on Wednesday.

As they have done so many times this season Manchester United fell behind early on but even without the injured Wayne Rooney they offered another dazzling display of firepower.
James Perch delighted the Newcastle fans with a fourth-minute opener at Old Trafford.
Jonny Evans levelled in the 25th minute before the Manchester United defender put through his own net four minutes later as the visitors went back in front in controversial fashion.
Patrice Evra equalised for the home team but Papiss Cisse then gave Newcastle a 3-2 lead. Robin van Persie hit back for Manchester United before Mexico striker Hernandez, in for the injured Rooney, popped up with the last-minute winner.
Manchester United's 19 league matches this season have yielded a total of 76 goals and their mantra appears to be 'however many you score, we will score more'.
Tags: Manchester United , Newcastle United , Javier Hernandez , Wayne Rooney , Robin van Persie

'It's the same story for us at Sunderland every year' 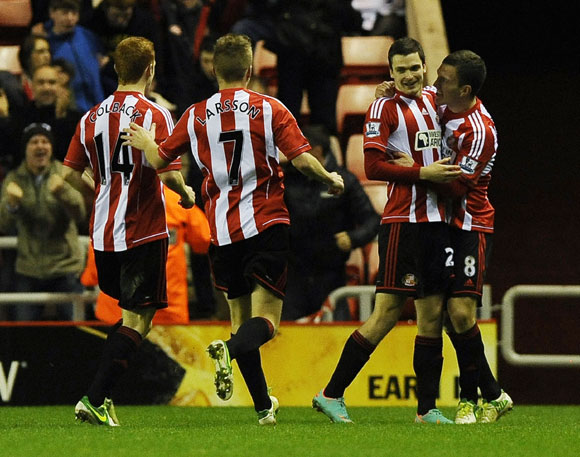 Manchester City were undone by former winger Adam Johnson as he scored the only goal in a 1-0 win for Sunderland which left the champions second in the table, four points ahead of Chelsea.

Manchester City's defeat at Sunderland was their second in a row at the Stadium of Light.

"It's the same story for us at Sunderland every year, we are not going to come here next season," said manager Roberto Mancini with his tongue firmly in his cheek.

"It's important that our strikers start scoring more goals, sometimes we take one touch too many." 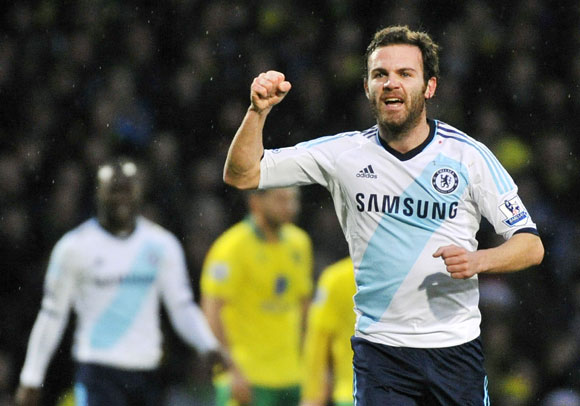 Chelsea beat Norwich City 1-0 thanks to a 20-metre strike from Juan Mata.

Chelsea, who are placed third on 35 points and have a game in hand, followed up their destruction of Villa with a gritty victory at Norwich.
"(Norwich) have won against Manchester United and Arsenal this season. It was tough but I was really pleased with the performance of the players," said Chelsea manager Rafa Benitez.
"The team are showing character. I am really pleased with the work rate and the style of play."
Tags: Chelsea , Juan Mata , Norwich City , Rafa Benitez , Manchester United and Arsenal 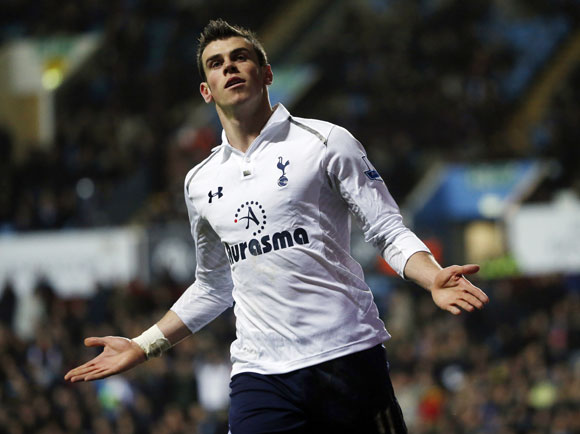 Tottenham Hotspur moved up to fourth after Gareth Bale grabbed his first Premier League hat-trick in a 4-0 rout at Aston Villa who were also thrashed 8-0 at Chelsea on Sunday.

In the race for fourth position, Everton briefly nudged ahead on 33 points with a 2-1 win over struggling Wigan Athletic at Goodison Park where home defender Phil Neville made his 500th league appearance.

Tottenham replied in a later kickoff, piling on the Christmas gloom for Villa.

Sixth-placed West Bromwich Albion joined Everton and Tottenham on 33 points with a 2-1 victory at Queens Park Rangers in a match delayed after the bus carrying the visiting team arrived late.

Stoke City moved up to eighth 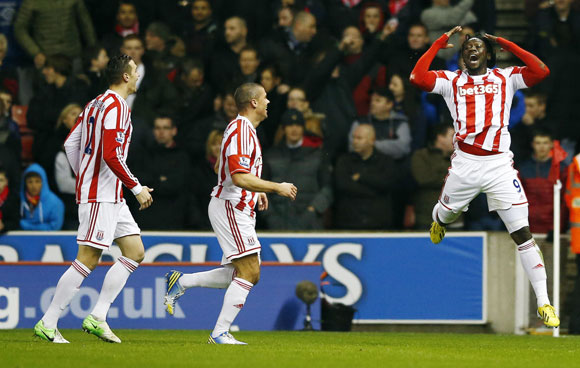 Jonathan Walters scored twice as Stoke City moved up to eighth with a 3-1 home victory over Liverpool in the late match despite Steven Gerrard scoring for the visitors from the penalty spot after one minute.

Harry Redknapp's Queens Park Rangers dropped back to the bottom of the table with only 10 points, Reading jumping above them on goal difference with a 0-0 draw at home to Swansea City.

Fulham drew 1-1 with Southampton who remain just above the bottom three.

With the season at the halfway point Manchester United, who have already racked up 48 goals to compensate for some unusually leaky defending, have 46 points with Manchester City on 39.