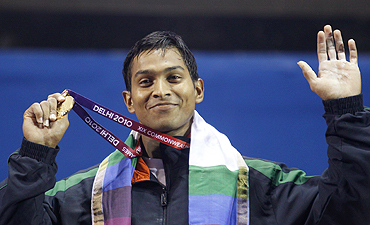 India's K Ravi Kumar created a new Commonwealth Games record with a total lift of 321kgs as he grabbed gold in the 69-kg category in the weightlifting competition on Wednesday.

The silver went to Sri Lanka's Chinthana Vidanage, who finished with a lift of 308 kgs. Mohd Hafifi Mansor of Malaysia bagged bronze with a total lift of 306 kgs. 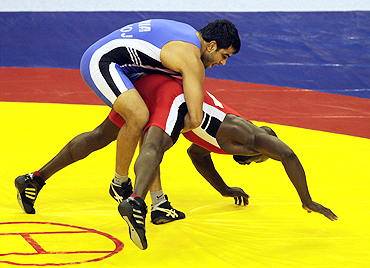 Sunil overpowered Hawthorn of Wales in his 66kg bronze medal play-off bout. Manoj won silver in the 84kg Greco-Roman wrestling, while Dharmender Dalal won his bronze in the 120kg category. 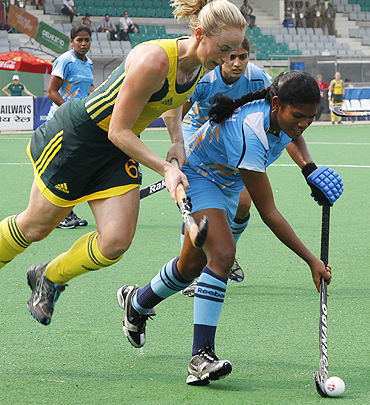 India's chances of progressing to the semi-finals of the women's hockey event at the Commonwealth Games suffered a setback after the home team went down fighting 1-2 to defending champions Australia in their second Pool A match on Wednesday. 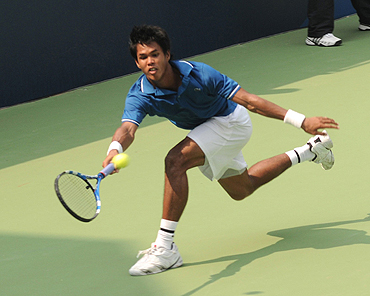 Somdev Devvarman and Sania Mirza breezed into the quarter-finals after easy victories but Rohan Bopanna bowed out of the men's singles competition on Wednesday.

Poojashree Venkatesh, who won 6-0, 6-0 in the first round, went down fighting 6-7 (6), 3-6 after an hour and 46 minutes' battle against fifth seed Heather Watson of Guernsey.

But it was Rushmi Chakravarthi who scored a huge upset, ousting British third seed Katie O'Brien 1-6, 7-6, 7-5 in the second round of the women's singles.

With this win, the 32-year old will join Sania Mirza in the quarter-finals of the tennis event. 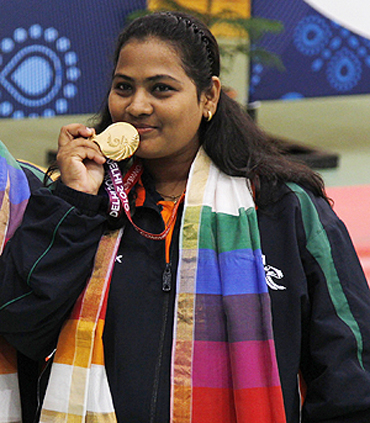 Sayyed shot 203.8 in the final round for a tally of 786.8 and set a new Commonwealth Games record and give India its seventh gold.

Rahi Sarnobat bagged the silver, with a final score of 781 after scoring 205 in the final round, while Malaysia's Pei Chin Bibiana took the bronze with a score of 778.2. 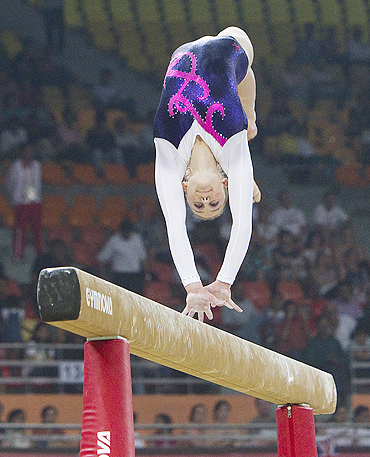 Meanwhile, in the men's artistic gymnastics competition, India's Ashish Kumar finished a disappointing eighth in the all-round final. Kumar ended his campaign with a total of 81.800 points, which was not enough for a podium finish, as English duo of Luke Folwell (85.550) and Reiss Beckford (85.450) bagged the gold and silver medals respectively. 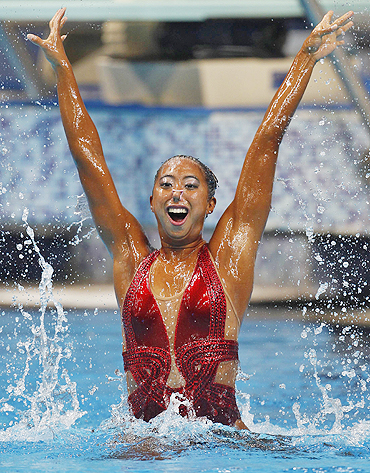 Prasanta Karmakar on Wednesday created history by becoming the first Indian para-swimmer to win a medal when he claimed bronze in the 50m freestyle event.

Clocking his personal best of 27.48s, Karmakar finished behind Simon Miller of England (26.70). Gold medalist, Matthew Cowdrey of Australia bettered his own timing to create a world record in the same event.

India's biggest hope in main swimming event, Virdhawal Khade, who made it to the 50m butterfly final, finished seventh, clocking a time of 24.61. 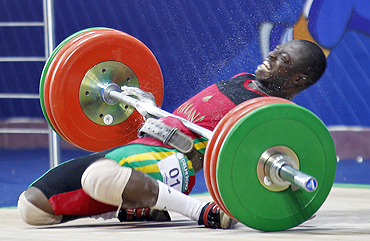 Seth Degbe Fetrie of Ghana is pinned under the bar during an unsuccessful attempt in the men's 69kg weightlifting competition.

The gold medal in this category was eventually won by Indian K Ravi Kumar later on Wednesday. 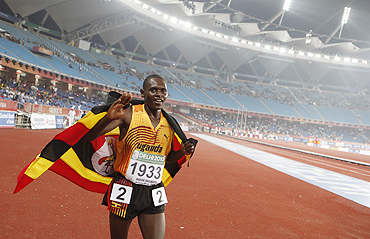 Ugandan Moses Kipsiro stunned Kenyan Eliud Kipchoge, the season's leading athlete and Beijing Olympics silver medallist, with an effort of 13:31.25, one of the slowest timings in the 5000m final in these Games.

Meanwhile, India's Mohd Abdul Najeeb Qureshi on Wednesday equalled the national 100m record while qualifying for the semifinals. Qureshi clocked 10.30sec to equal Anil Kumar's national record set in 2005 and finished fourth in the round two heat number one to qualify for the semis.

Another Indian sprinter, G Nagaraj, failed to advance after finishing seventh in a round two heat with a time of 10.65secs, below his seasons's best of 10.55secs.