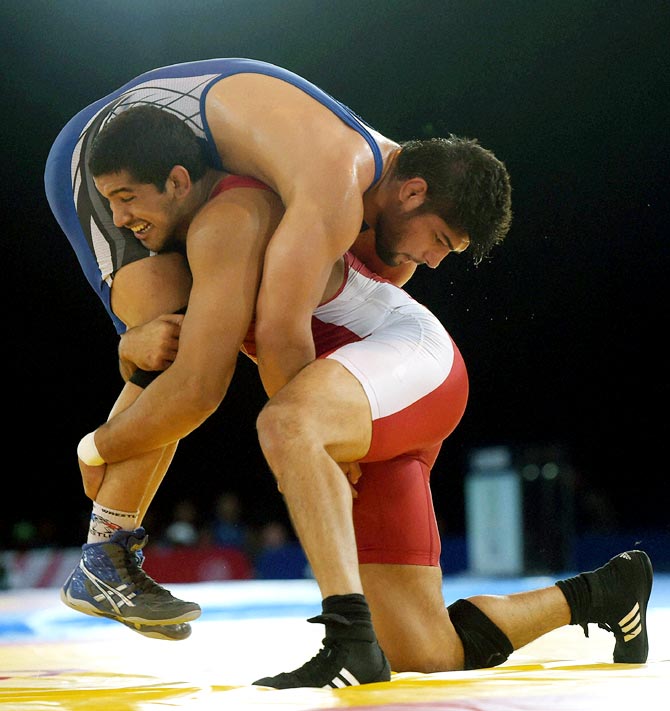 The coveted gold medal eluded the Indian grapplers on Day 7 as they collected four silvers and a bronze from the wrestling arena to swell their overall tally in the sport to 10 at the 2014 Commonwealth Games in Glasgow, on Wednesday.

As many as four Indians entered the final and one made it to the bronze medal round through repechage but none could win a gold at the SECC wrestling arena.

So far, India have won a total of three gold, five silver and two bronze in wrestling.

The closest India came to winning the gold was through Kadian in the men's 97kg freestyle as he lost in a closely-fought bout but the remaining three finalists came a cropper when it mattered the most.

Kadian led 2-0 on technical points against Indian origin Canadian Arjun Gill in the first period of three minutes but squandered it as his opponent came back strongly in the second period to run away with the gold, much to the huge disappointment of the Indian camp who sat all day long in search of a gold.

The final bout ended in a tense situation as the scoreboard showed both wrestlers tied 4-4 on technical points but the judges awarded the gold to Gill as he won the last point from the bout.

A disappointed Kadian rued that his defence did not work at the last minute of the bout, which allowed his opponent to come back from 0-2 down in the first period and 2-4 within a few seconds to end the contest.

"My defence failed at the last minute. I was leading the bout but I could not stop a late attack from my rival. The rule is that the wrestler who gets the last technical point will win in case of a tie on points. I was about to win the gold but it had slipped away from me," said Kadian.

"But a medal is a medal and I will work hard to improve my defence in future events. I wanted to win the gold for the country but it did not happen," said Kadian who had beaten the same opponent 3-0 in Italy last year.

Asked if the points towards the end of the contest could have been debatable, he said, "It is a part of the game. The match officials may not be 100 per cent in their decision. But what we can do now. It's over," he said. 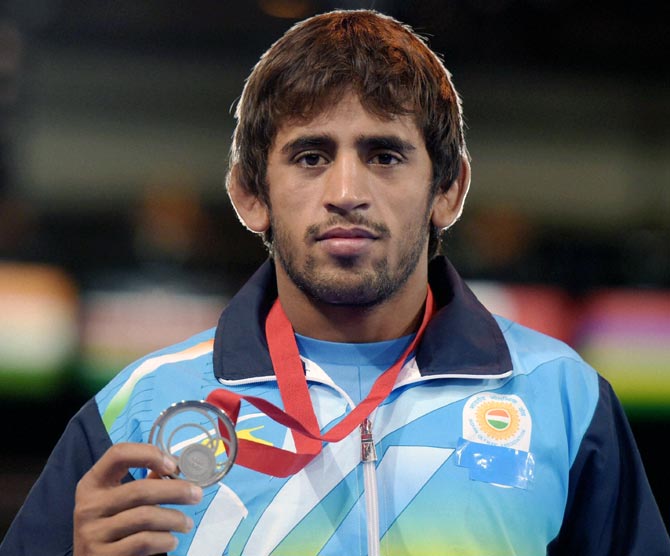 Bajrang, the 2013 World Championship bronze medallist and the best gold hope for India, lost his final bout against David Tremblay of Canada in men's 53kg freestyle that lasted just over 90 seconds.

Bajrang, who lost 1-4 in his final bout, was struggling all through the day with his defence and he let his opponent attack on his legs from which he could not come out unscathed. The 21-year-old India was left lying on the mat with his legs at the hands of his opponent who rolled over several times to get the necessary points and win the match.

Bajrang admitted that his weak defence on attack on the legs did him in and said he will have to improve that technical aspect of his game.

"I knew that my weak defence on my opponent attacking on my legs could be a problem and so I was very conscious to guard against it. But I could not do that in the final bout. It was a mistake from me and I could not win a gold because of that," he said.

"I had come here to win nothing less than a gold so I am disappointed. We had tough training before the Games but now I have to go back and work on my technique to get better." 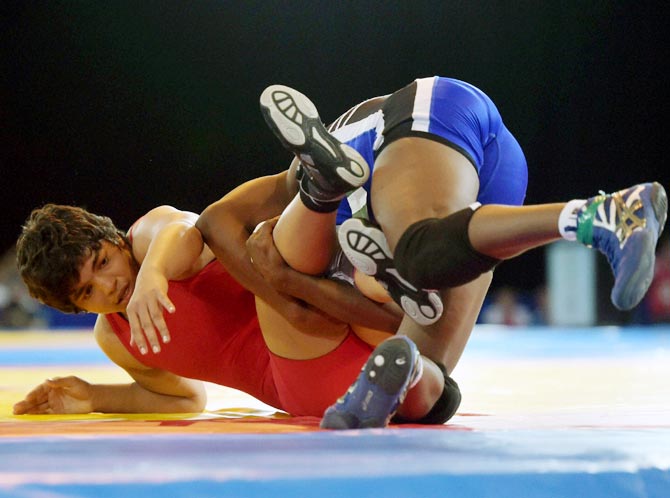 In the women's category, Lalita was pinned in just 30 seconds by Nigerian Odunoya Adekuoroye in the 53kg final, while Sakshi Singh also suffered the same fate when she was beaten 12-0 by Aminat Adeniyi of Nigeria in the final of the 58kg event and Navjot Kaur bagged a bronze in the 69kg category.