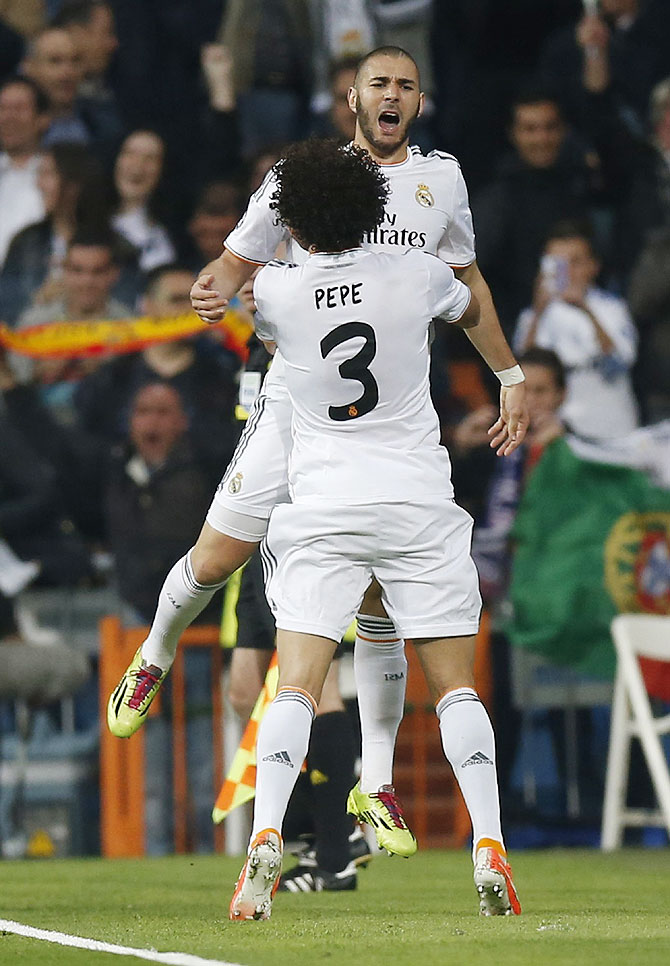 Real Madrid struck early through Karim Benzema and comfortably held Bayern Munich at bay to beat the holders 1-0 on Wednesday and move a step closer to a first Champions League final in 12 years.

Chasing a record-extending 10th European crown, Real were content to cede possession to the slick Bundesliga champions in the semi-final, first leg and created much the better chances with a series of trademark counter attacks.

Benzema's 19th-minute goal came from one such swift breakaway and set Real up for Tuesday’s return leg in Munich when they will be looking to avenge a reverse to Bayern at the same stage in the 2011-12 edition.

'We were defending but we had some very good counter attacks' 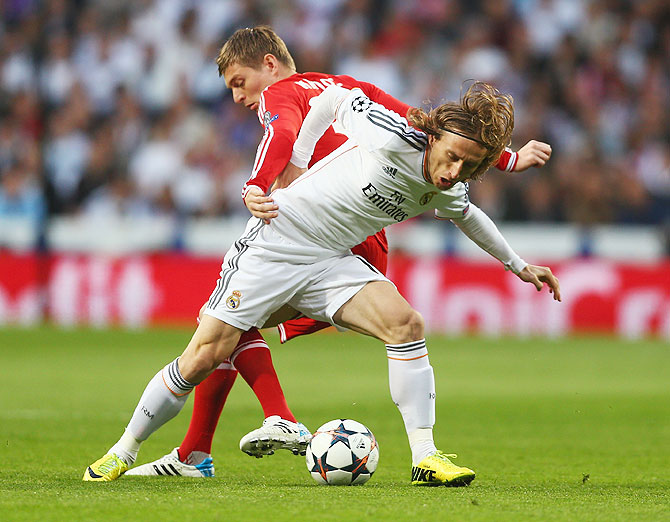 "At the start we were timid and we had some problems," Real coach Carlo Ancelotti said.

"In the second half, we had a bit more control," added the Italian, who is in his debut season in Spain.

"We were defending but we had some very good counter attacks.

"I am happy with everything, with the result and the commitment of the players, because the match was tough."

Ancelotti's side may, however, live to regret squandering two first-half chances that could have put the tie beyond Bayern’s reach. 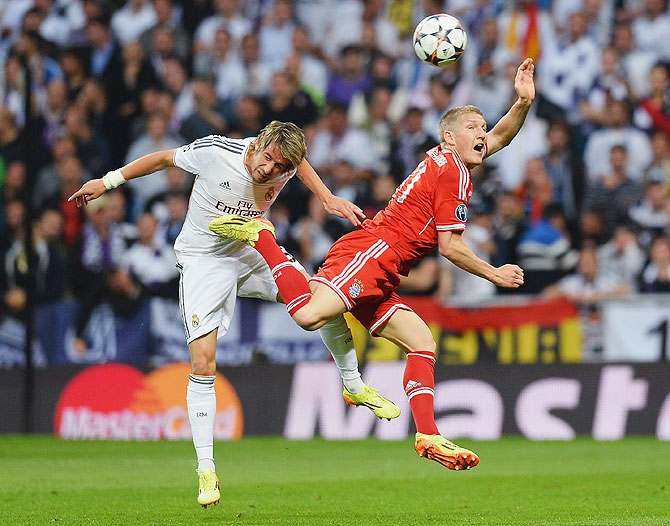 Champions League top scorer Cristiano Ronaldo, back after injury, sliced a first-time shot high and wide in the 26th minute and Angel Di Maria blasted an angled effort over the crossbar when well placed four minutes before the break.

Bayern were thwarted time and again by a well organised Real defensive line and came closest to scoring late on when substitute Mario Goetze was denied by a brilliant save from Real captain and goalkeeper Iker Casillas.

It marked a losing return to Spain for Bayern coach Pep Guardiola, who mostly got the better of Real in four trophy-laden seasons in charge of their arch rivals Barcelona between 2008 and 2012 but suffered his first defeat at the Bernabeu.

'We did not finish our chances well' 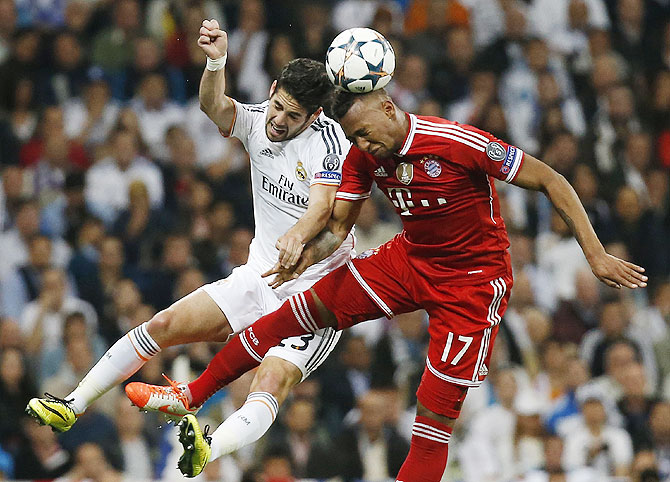 "I did not want to have the typical German game of back and forth," Guardiola told German television broadcaster ZDF.

"I wanted a lot of possession and we managed that in part. But we did not finish our chances well," added the 43-year-old.

Under the decorated Ancelotti, Real have high hopes they can finally claim the elusive 10th European crown they have been chasing since their last triumph in 2002.

There was a crackling atmosphere at their giant Bernabeu arena before kickoff and the home fans unfurled a huge banner proclaiming their status as “Kings of Europe”.

However, it was current champions and five-times winners Bayern who bossed the early stages with the Real players obviously under instructions to sit back and try to punish their opponents on the break. 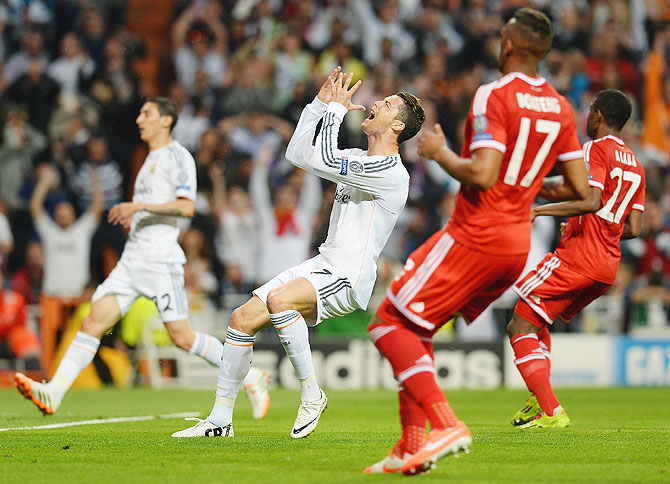 Benzema's goal came from exactly that scenario. Bayern midfielder Toni Kroos had a shot blocked in the Real penalty area and the home side seized possession and poured forward.

Ronaldo played Fabio Coentrao in on the left and his low cross evaded the Bayern defence and found Benzema waiting at the far post to tap into an empty net.

Real were also first to threaten in the second period thanks to an error in the Bayern defence and Ronaldo, back after knee and thigh muscle injuries, burst clear on the right of the area and forced a fine diving save from Manuel Neuer with a low shot.

The Portugal captain has a record-equalling 14 goals in the Champions League this season and was clearly hungry to set a new best and Neuer again had to be alert when Ronaldo cracked a low shot towards the corner in the 68th.

Bayern huffed and puffed, with Arjen Robben and Franck Ribery probing down wither flank, but struggled to find a way through the massed ranks of Real defenders.

'We expected a storm but they waited' 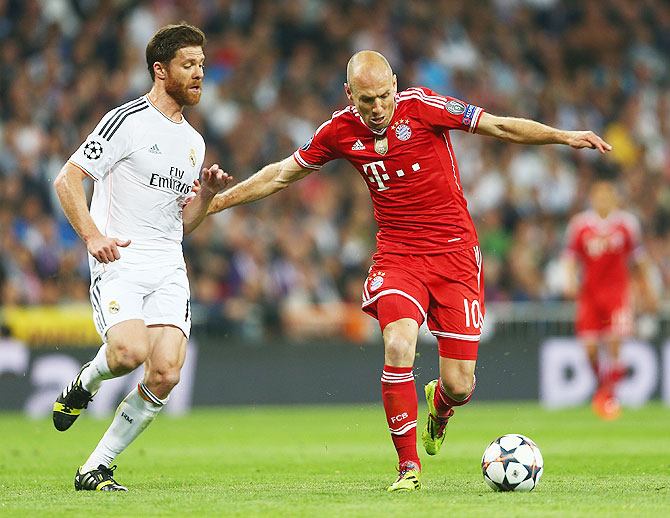 After the introduction of Thomas Mueller and Goetze they finished strongly and in a frantic finale Goetze might have done better when left unmarked 10 metres out but Casillas was equal to his fierce shot.

In added time, Bayern claimed a penalty after Xabi Alonso dispossessed Mueller when he was about to shoot but referee Howard Webb waved away their furious protests.

"It was a very tough match, intense and difficult," Real centre back Sergio Ramos said in an interview with Spanish television broadcaster Canal Plus.

"We worked superbly in defence and we knew how to create our chances and I think it is a satisfactory result to take to Munich and try to make it through to the final."

Bayern winger Robben, a former Real player, said they had been surprised by the home side's passive approach and had been expecting to be put under a lot more pressure.

"We expected a storm but they waited. That was a bit of a surprise," he told ZDF.

"We had chances to score. It was a good game and I liked how we played, especially after the two weeks when we were not in top form," added the Netherlands international.