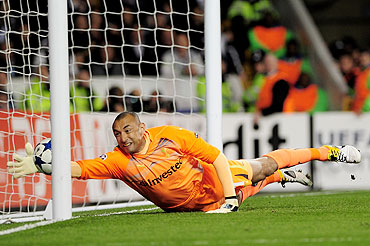 Jose Mourinho stayed on course to become the first coach to win the Champions League with three different clubs when Real Madrid beat Tottenham Hotspur 1-0 on Wednesday to seal a 5-0 aggregate rout in the quarter-finals.

Cristiano Ronaldo scored one of the softest goals of his career as Mourinho's team set up a titanic semi-final confrontation with arch-rivals Barcelona on April 27 and May 3.

Spurs keeper Heurelho Gomes allowed a long-range Ronaldo shot to bounce out of his hands in the 50th minute and failed to retrieve the ball as it bounced agonisingly over the line at White Hart Lane.

'Anything can happen in the semis' 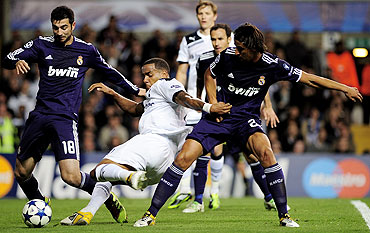 "The semi-final is a semi-final, anything can happen," said Mourinho who lifted the Champions League trophy with Inter Milan last season and with Porto in 2004.

"We have two matches against Barcelona before the semis and there is no time to think. If Spurs had scored in the first half ... it could have been difficult but when Cristiano scored it was all over," the Portuguese told ITV Sport.

Real, 4-0 up from last week's first leg, were never in danger of suffering what would have been the biggest reversal since European club competition began in 1955 as they recorded their first away win in the knockout stages for nine years.

The closest Champions League debutants Spurs came to scoring was when Gareth Bale had a first-half goal ruled out because Luka Modric was offside. 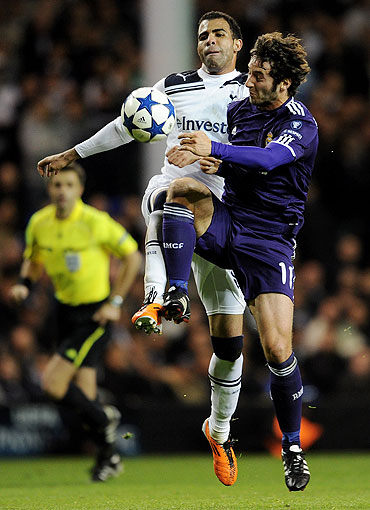 Spurs, at the start, set about their virtually impossible task with Bale and Aaron Lennon outpacing Alvaro Arbeloa and Sergio Ramos at will on the flanks before whipping in balls that put Real under pressure.

One run by Bale, when he blazed past Ramos, brought an astonished look to the face of Mourinho, but it was Lennon who created a good chance after 27 minutes.

Lennon left Arbeloa in his wake again only for Roman Pavlyuchenko to blast the ball into the upper tier of the stands.

Spurs also had three penalty appeals turned down as they continued to go forward, Italian referee Nicola Rizzoli waving away claims after Bale, Modric and Pavlyuchenko all went down under challenges.

'He made a rare mistake but that's how it goes' 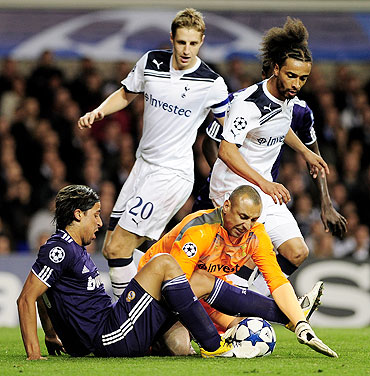 Real, naturally enough, were content to sit back and only gave the home defence one moment of real concern in the first half when Ramos forced Gomes to make a fine save from a header and Emmanuel Adebayor lashed the follow-up wide.

The second half lacked the intensity of the first after Ronaldo's goal as Real cruised into the last four, maintaining their challenge for a 10th European Cup title ahead of the final at Wembley Stadium on May 28.

Spurs manager Harry Redknapp was in philosophical mood after his team's defeat.

"The goal was disappointing but the goalkeeper has been great for us and he has made saves in the past that he had no right to make," said Redknapp.

"He made a rare mistake but that's how it goes." 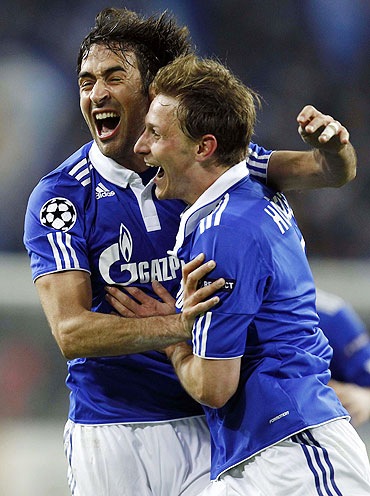 Another vintage performance from Raul sealed Schalke 04's unexpected passage to the Champions League semi-finals for the first time on Wednesday as holders Inter Milan were eliminated 7-3 on aggregate.

The 33-year-old Spanish striker scored one goal and set up another in a 2-1 second leg quarter-final victory for the Bundesliga side who now face Manchester United in the last four.

Raul left Real Madrid last year after 16 trophy-rich seasons, including three Champions League titles, and he again proved he remains one of the most lethal strikers in Europe.

"These are the rewards for my constant hard work and my love for the game," a smiling Raul, the Champions League all-time top goalscorer who now has netted 71 times in Europe's premier club competition, told reporters.

"Now there will be two tough semi-finals with us against Manchester United and Real Madrid against Barcelona." 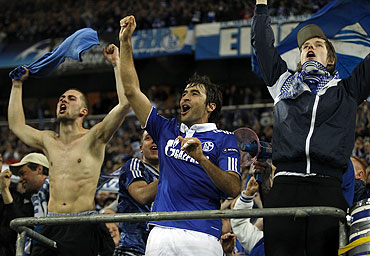 Raul has become a fan favourite in the former German coal-mining heartland -- a far cry from cosmopolitan Madrid.

He killed off any hopes Inter had of getting back into the tie after their first-leg humiliation at the San Siro when he picked up a Jose Jurado cross and rounded Inter goalkeeper Julio Cesar to slot in the opening goal on the stroke of halftime.

"Raul scored one goal and set up the other for Beni Hoewedes," a beaming Schalke captain goalkeeper Manuel Neuer told reporters. "On Saturday the fans wanted Raul in the stands but Beni went. Today it is Raul's turn." 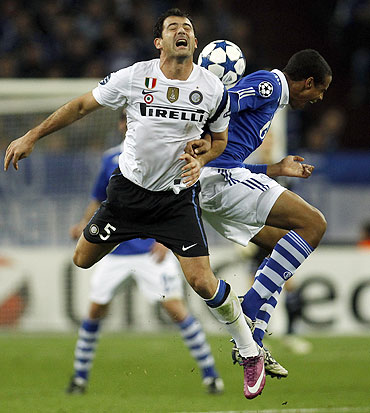 Schalke coach Ralf Rangnick, who has overseen four successive victories since he replaced Felix Magath last month, added: "This team played two great games against Inter and when you only allow two chances for the reigning champions then you understand how good this team worked."

Never before have the blue-whites played in the Champions League last four but thanks to Raul they now have every right to dream big when they face Manchester United.

It was never going to be a high-scoring game with Schalke careful to protect their first leg advantage but it was the perfect match for Raul.

Lurking for a quick break, the former Spain striker first threatened after a quarter of an hour with a header. He was on target just before the break, chasing down Jurado's cross to slot in before Thiago Motta levelled with a volley four minutes after the restart. 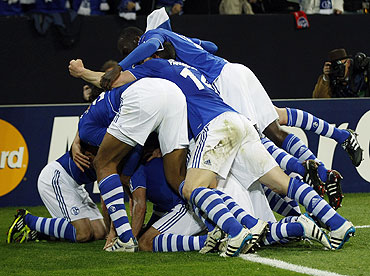 But the Spaniard then orchestrated their second win in two games against a largely toothless Inter, lobbing the ball forward over a static defence for Hoewedes to run on to and drill a low shot past Julio Cesar nine minutes from time.

The only time Raul looked unsure was when he was told to lead the celebrations, surrounded by fans in the stands, and the Spaniard for once looked out of his league, not knowing exactly what to do.

"Schalke were well organised and we just could not get things going as we had planned," Inter coach Leonardo said. "They played very well in both games against us."