'Winning gold at the Police Games was a good result' 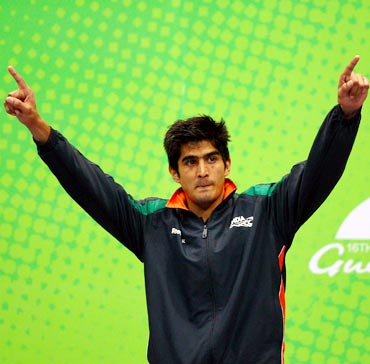 Vijender Singh stunned the nation when he won the bronze medal in the 75-kg category at the 2008 Olympic Games. A year later he proved that the showing in Beijing was no fluke by winning a bronze at the World Championships, and followed that up with a gold medal at last year's Asian Games.

Now, not surprisingly, he is being touted as one of India's best bets for gold at next year's London Olympics.

Having won gold at the World Police Games in New York late last month, he is now looking to succeed at the World Boxing Championships later this month and secure qualification for the London Games.

In a freewheeling interview, the 25-year-old pugilist from Bhiwani tells Harish Kotian, winning an Olympic gold medal is his dream and he is leaving no stone unturned to achieve it.

Winning the gold medal and being named the 'Best boxer' at the World Police Games would have come as a big boost ahead of the World Championships. Isn't it?

It was a good result. It was a good experience meeting policemen from all over the world and knowing how they go about their work.

Was the competition a bit easy, since you only had only policemen competing?

It was not easy; you had to work in every bout. The format made it an even contest. The new guys were placed in a separate group and the experienced boxers were all placed together in another group. The competition was tough and I am glad that I managed to win the gold medal.

'The World Championships is a very important tournament for me' 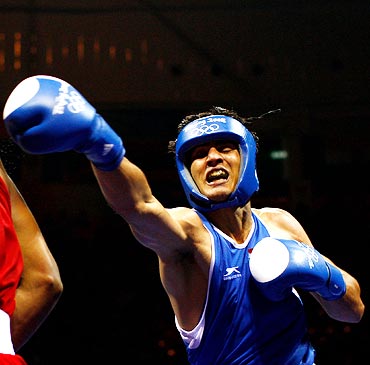 How are the preparations going on for the World Boxing Championships later this month?

Preparations are going on well. We were to leave for France for a training camp to prepare ourselves for the World Championships, but since Dinesh Kumar and I returned late from the Police Games, our visas could not be got on time. Now we will prepare here itself ahead of the  We can say that our preparations are going on quite well; now we just need to do well in the ring.

The World Championships is an important tournament, as far as securing qualification for the Olympics. Is there any pressure?

Yes, you are right. The World Championships is a very important tournament for me, because it will help me qualify for the Olympics. Winning an Olympics gold is my ultimate dream; I am working hard for it. So, our aim is not only winning medals at the World Championships, but also securing qualification for the Olympics. We hope to achieve our target.

You won the bronze medal at the World Boxing Championships in 2008. Are you confident of bettering that showing and winning the gold medal this time around?

Yes, just like everyone else, I am also hoping that I can win a gold medal this time. I have worked hard for the tournament, and, hopefully, I can end up winning the gold medal.

'Boxing gets a lot of support from sports fans in India' 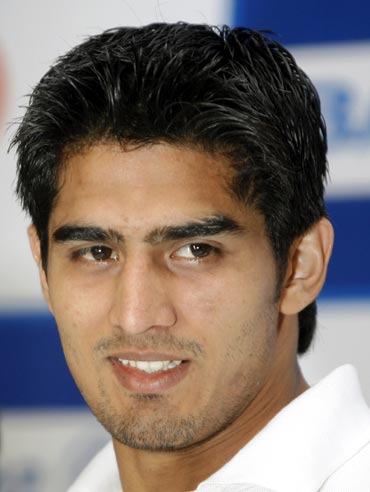 Your bronze medal at the 2008 Olympics Games raised the profile of boxing in the country. Are you happy that you were able to bring boxing back into the limelight?

I thank God that he chose me for this honour. It is because of God's blessings that I won bronze medals at the Olympic Games and World Championships, and a gold medal at the Asian Games.

The key was that I was able to continue my good performances since then. All my fans have given me so much love which made all this possible.

Boxing is a sport which gets a lot of support from sports fans in India and it feels good when your hard work is appreciated by the fans. 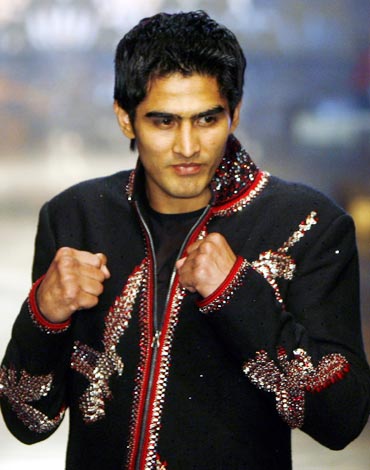 With nearly 10 months to go for the 2012 Olympics, are you happy with the way the Indian boxing team is shaping up? Can we expect more medals next year?

As of now, everyone's main target is to qualify for the Olympics. Once you qualify, only then can you begin to plan or think about the Olympic Games. Right now everyone's focus is on the World Championships.

But how are the Indian boxers shaping up right now?

All the boxers have done well recently, so their confidence is high. I am sure all our Indian boxers will do well at the World Championships, because everyone has worked so hard in the last couple of years.

Are you happy with the way boxing is being promoted? Do you feel the boxers need to get more support from the government and federation?

It takes time for things to change. It's been nearly three years now since winning the Olympic medal, but people still love me and support me so much. So, if we win more medals at the London Olympics next year, more and more people will support us. That is why it is necessary to keep doing well. Once we start winning boxing will become one of the most-followed sports in the country.

'It will take time to understand the new system' 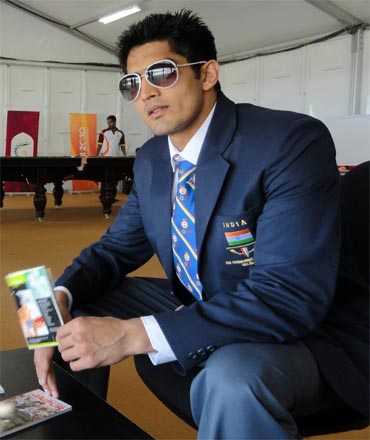 It was confusing to begin with, but now, as we keep practicing and playing, we are coming to grips with the scoring system. It will take time to understand the new system as we have not played many tournaments under it.

Any plans to get the referees in your favour, because, quite a few times, we have seen that decisions have gone against you in crucial bouts?

I am thinking about that. I will go into the ring wanting to land punches on my opponent and knock him out. If the referees favour me then it will be good, else I cannot do anything about it.

You have been training non-stop for the past few months. Aren't you worried that you might get tired or pick some freak injuries?

There is nothing like that because this is our daily job; no one gets tired doing their daily job. In fact, it makes you better because you get more experience working every day.

'I want to do well at the Olympic Games' 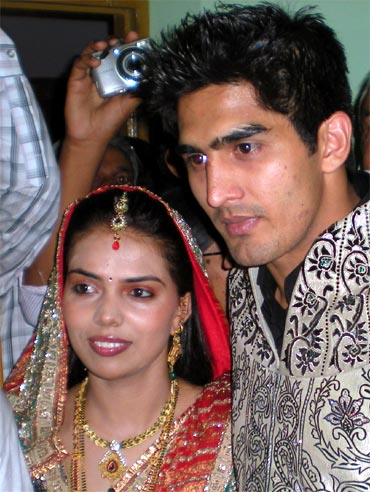 You recently got married, but have been away from home since then. How has your wife reacted to that?

It's been nearly 4-5 months since we got married. My wife [Archana] knew before we got married that I am away most of the time because of boxing. She also knows that I am working hard to win a medal at the Olympics and she is supporting me quite well.

Also, there were reports that you were considering acting in a Bollywood movie. Can you give us details about the same?

For now, the Olympics takes priority and everything else has been kept aside. I want to do well at the Olympic Games next year and all my focus is on that. There will be time in the future to do other stuff. Right now I am thinking about that.