The 9.3-km parade would involve 46 boats 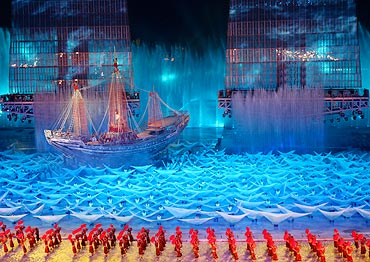 A boat parade named "Setting Sail" on the famous Pearl River that passes through the length of the city will be one of the highlights of the 16th Asian Games opening ceremony to be held in Guangzhou on Friday to herald the sports spectacle that runs through till November 27.

The 45-minute boat parade will demonstrate the charm of modern China and showcase the Cantonese culture that's unique to this sprawling city, said the Deputy Director of Ceremonies and Cultural Events of Guangzhou Asian Games Organising Committee (GAGOC), Ning Xiaozhou, at a press conference on Thursday.

"The decorated boat parade on the river, which is 2400-km long and is the third longest river in China snaking its way from Yunnan Province to the South China Sea would be the way to welcome the athletes by the citizens of Guangzhou," he said.

"The 9.3-km parade would involve 46 boats and will have athletes and officials from 45 members of the Olympic Council of Asia taking part in the quadrennial extravaganza.

"They will set sail from Baiertan, west water area of the river, and finally reach Haixinsha Square after passing under six bridges across the river and along the way the boat cruise would display the LED images of red sail, white sail, lantern, kapok, dove of peace and the emblem of the Guangzhou Games," he added. 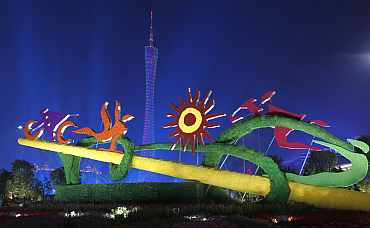 Five celestial goals representing the Games mascot would man the huge steering wheel of the lead boat and there will be the blare of the siren and in response, people in other boats would whistle and start the cruise to form a memorable night on the Pearl river, the official said.

Musicians will be on board the boats and will play music from the length and breadth of the continent, including Indian and South Asian style.

As the starting point of the ancient and famous Silk Road, Guangzhou has numerous landmark buildings along the river and to display the charm of the city seven performance sites have been selected - to display theatrical performances with Chinese characteristics, Lingnan style and Guangzhou flavour.

"The organisers have also added some more displays on the river water like water surfing and motorboats, while the images of the Games mascots, emblem and the Chinese fire dragons would be displayed on LED to make for a spectacular atmosphere," said Xiaozhou.