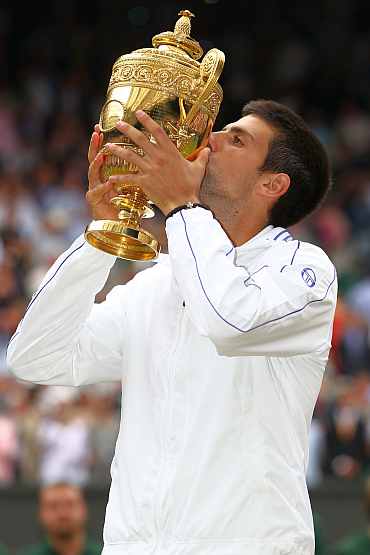 Novak Djokovic proved he is the dominant force in men's tennis by outplaying defending champion Rafa Nadal to win Wimbledon for the first time with an emphatic 6-4, 6-1, 1-6, 6-3 victory in the final on Sunday.

The Serbian second seed was already assured of leap-frogging Nadal at the top of the world rankings and he continued his spectacular year by claiming the trophy he has always dreamed of lifting above his head.

Top seed Nadal had not lost at the grasscourt Grand Slam since the 2007 final against Roger Federer, a 20-match streak, but could not live with Djokovic in the grand finale to the 125th Wimbledon championships. 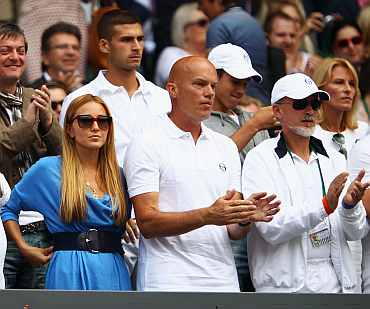 It was not the classic final widely expected but that was largely to do with the staggering quality of Djokovic's play as he claimed his third Grand Slam title.

Despite winning 47 of his 48 matches this year and beating Nadal in four consecutive finals, the 24-year-old started as the underdog having never got the better of the Spaniard in a Grand Slam match.

Despite a lapse in the third set he was always in control, clinching victory on his first match point when Nadal fired a backhand over the baseline to spark emotional scenes in the players' box where his father Srdjan and mother Dijana hugged and danced.

'This is the tournament I always dreamed of winning' 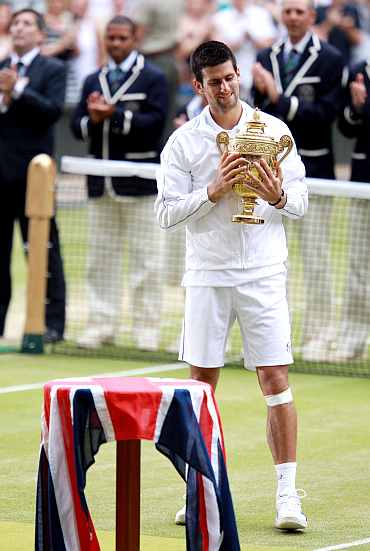 After consoling a crestfallen Nadal at the net, Djokovic bent down, yanked a tuft of grass from the famous court and put it in his mouth.

He then threw three rackets into the crowd before closing his eyes to absorb the enormity of his achievement in breaking the Roger Federer/Nadal domination of the tournament stretching back to 2003.

"This is the best day of my life, this is the tournament I always dreamed of winning," Djokovic said following the presentation ceremony.

"When you are playing the best player in the world, Rafa Nadal, I had to play at the top of my game and I think I played my best match on grass," he added. 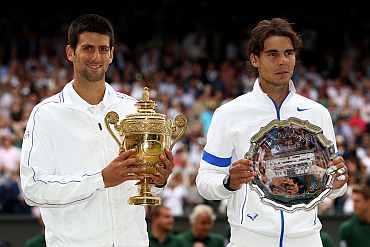 Nadal began the match as he finished against British hope Andy Murray in the semi-finals, scorching two forehands past Djokovic to threaten an immediate break of serve.

Djokovic, though, took a deep breath and repelled Nadal's early attack before the match settled into a ryhthm with neither player showing any weakness on serve until the 10th game.

At 30-30 Nadal hooked a forehand into the net and followed that with another loose stroke into the tramlines as Djokovic seized the opening set from out of the blue.

With his confidence soaring Djokovic pounced early in the second to gain a break. Showing the kind of court coverage that has become such a big part of his armoury this year he reached a Nadal drop shot and flicked the ball behind the net-rushing Spaniard, greeting the winner with a Serbian roar.

Two pinpoint aces made it five games in a row and a stranglehold of the final that was rapidly slipping away from Nadal.

In the sixth game Djokovic produced a stunning drop shot, then a topspin lob and a wrong-footing forehand to earn another break on the way to taking the set in 33 minutes. 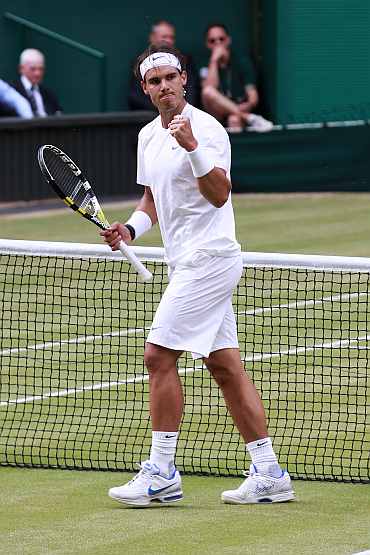 Suddenly the crowd's support swung to Nadal and the fight back they wanted began almost immediately when the Spaniard seized on a few Djokovic errors to race through the third set.

For a while it looked as though Nadal could become the first man to win the Wimbledon title from two sets behind since 1927 as the momentum changed.

But Djokovic was not about to choke.

Even when Nadal got a huge slice of luck to break back in the third game of the fourth set with a backhand that dribbled off the netcord and died on Djokovic's side, the Serb remained steadfast, his self-belief unshaken.

Djokovic continued to match Nadal from the baseline and he broke the Spaniard's serve again in the eighth game before clinching victory on his first match point.