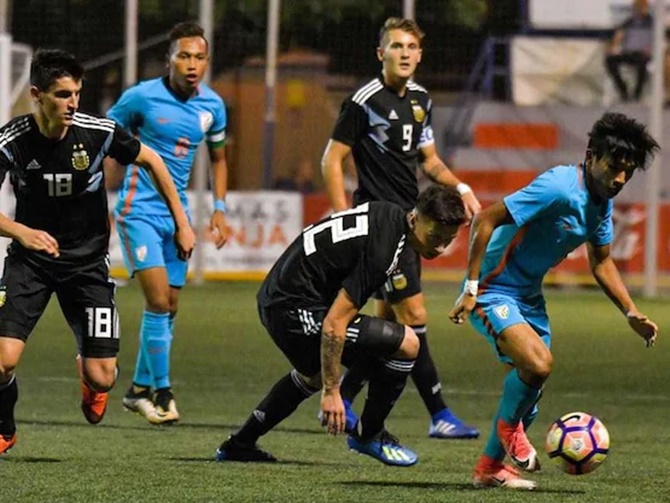 IMAGE: India football team notched up one of their most memorable triumphs. Photograph: AIFF Media/Twitter

Indian football was a picture of good health with a 10-man under-20 outfit's triumph over a country that gave the world Lionel Messi towering above the heights its senior team and teens reached in 2018.

Messi's World Cup dream with Argentina though lay shattered when they crashed out in the quarterfinals to eventual winners France, who trumped underdogs Croatia in the title clash.

They may have stumbled in the last hurdle, but the Croatians won many hearts across the world with fans interpreting Luca Modric's Ballon d'Or as a vindication of sorts for his tireless work over the years for his country and club, European champions Real Madrid.

Back to Indian football, the unimaginable happened when the country's U-20 squad, managed by one Floyd Pinto, stunned traditional giants Argentina 2-1 at the Torneo Internacional de Fútbol Sub-20 de L'Alcúdia (L'Alcúdia International Under-20 Football Tournament), better known as COTIF, in Valencia, Spain in August.

This result against a two-time World Cup-winning nation earned India genuine respect in the world of football while opening up a window of opportunity to test the home-bred players against the global best on a regular basis.

What made the achievement more praiseworthy was that it was achieved despite the Indian team being reduced to 10 men. The side played for 40 minutes with the numerical disadvantage, against an outfit coached by World Cupper Pablo Aimar.

"Argentina are miles ahead of us," Pinto would remark after his wards scripted one of Indian football's most memorable triumphs, and he was not off the mark at all.

Not far behind in magnitude was the under-16 boys' win over Asian heavyweights Iran in another invitational tournament in Amman, achieved four hours after the Argentina heist in Spain.

They have been virtually on the road since January, playing in Europe and Asia, and missed by a whisker what would have been a historic qualification to the 2019 U-17 World Cup.

The team went down fighting 0-1 to the Korea Republic after making it to the quarterfinals for the first time in 16 years, progressing out of the group stages as runners-up.

These victories showed Indian football is on the right track, having made the transition from 'Sleeping Giants' to 'Passionate Giants' with the successful hosting of the U-17 World Cup the previous year.

There was no dearth of activity in the senior team with Stephen Constantine's wards ramping up their preparations for the AFC 2019 Asian Cup, which will be a fair reflection of where the team stands at the moment and what the future holds.

They have been clubbed with hosts UAE, Thailand and Bahrain and should they clear the group stage, India will get an opportunity to take on the continent's big guns such as Japan, South Korea, Australia, Iran and Saudi Arabia.

Constantine has made it clear that his players will need to play the best football of their lives if they are to make an impression in the continental showpiece, scheduled to be held from January 5 to February 1.

India will take confidence from some impressive results in the recent past, the most prominent being the goal-less stalemate with China, coached by World Cup-winning Italian manager Marcello Lippi. 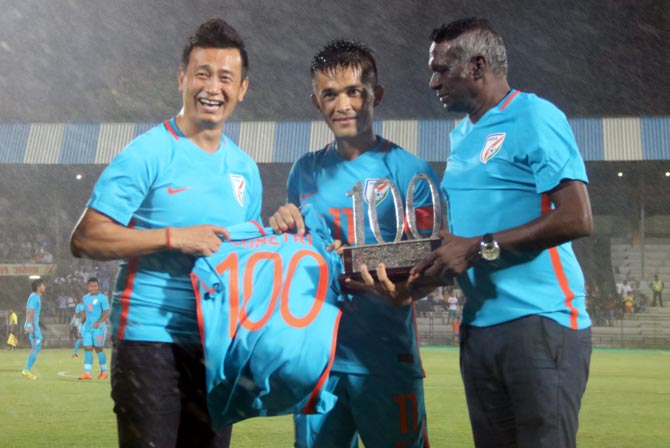 Before that, the talismanic Sunil Chhetri's emotional plea to fill the stadium for the Intercontinental Cup matches in Mumbai, found resonance as fans thronged to watch India lift the trophy, beating sides like New Zealand, South Africa and Kenya.

Chhetri, having urged the fans to "come to the stadium and abuse us on our faces", produced a magnificent show on the field and powered the hosts to the trophy with a brace in the final.
At 60,000 times, the plea by the 34-year-old striker emerged as the most 'retweeted tweet' in the year.

In the final, Chhetri also became the joint second highest international goal scorer among active players along with Messi with his 64th strike for the country.

As far as the domestic circuit is concerned, Real Kashmir became the first club from the valley to qualify for the top-flight and remains the flavour of the season owing to their impressive show in the I-League, where they are currently placed second. 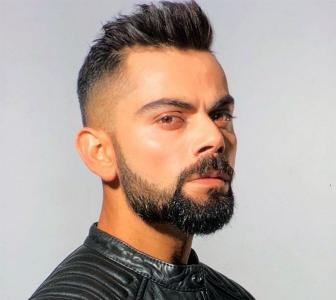 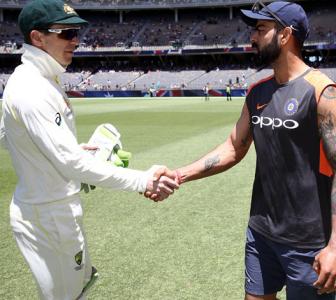