Maria Sharapova overcame more problems with her serve to beat Czech Lucie Safarova 6-2, 7-6 and reach the quarter-finals of the Pan Pacific Open on Wednesday.

French Open champion Sharapova finished the match with an ace but double-faults on big points almost cost the Russian the second set as the sun set over Tokyo.

"After a long match yesterday, I was just happy to win in two (sets)," said Sharapova, who had taken more than three hours to dispatch British qualifier Heather Watson the previous day. 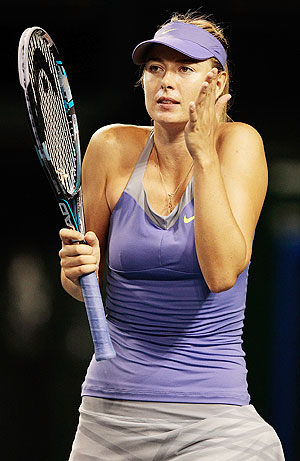 "Obviously, I had a bit of a let-down in the second set," added the second seed, almost forced into a decider having blown a 3-0 advantage in the set before digging in to claim the tiebreak 7-5.

The sixth seed won in two hours and 22 minutes, clinching victory with a crunching forehand her opponent could only dump into the net.

"I'm a bit tired but I have lots of motivation to keep winning," said Errani, who has captured titles in Acapulco, Barcelona, Budapest and Palermo this year.

"It's been an amazing year but I still have to qualify for the (season-ending) Championships."

Errani set up a quarter-final against Russia's Nadia Petrova, the 17th seed battling to a 7-6, 6-7, 6-4 victory over Croatia's Petra Martic.

Nine of the world's top 10 women are competing at the hardcourt event, with U.S. Open champion Serena Williams the only absentee among the WTA's elite.