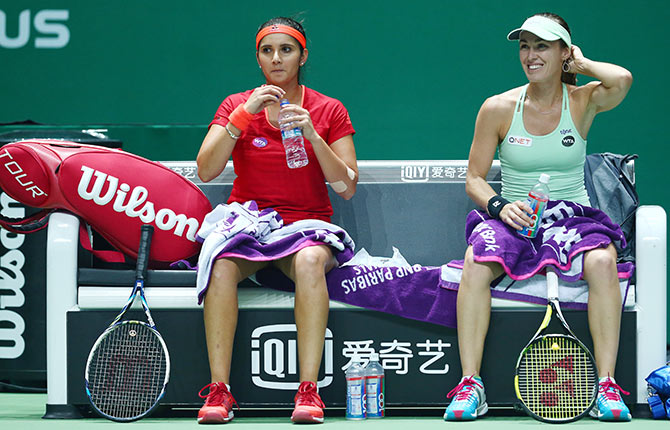 IMAGE: Sania Mirza of India and Martina Hingis of Switzerland take a break during their match at the WTA Finals in Singapore. Photograph: Clive Brunskill/Getty Images

World's numero uno women's doubles pair of Sania Mirza and Martina Hingis continued their rampaging form and extended their monster winning streak to 20 matches in a row after reaching the semi-finals of the WTA Finals in Singapore.

Sania and Martina, the top seeds, took just 90 minutes to get past the challenge of fourth-seeded Timea Babos of Hungary and Kristina Mladenovic of France 6-4, 7-5 in their final round-robin match and finish on top of their group.

By virtue of this win, Sania and Martina had avenged their loss to the same pair the last time they played in Rome this year.

Saina and Martina lifted their game just at the right time and made full use of the only two breaks of the match they got. The Indo-Swiss pair got break point opportunities at 4-all in the first set and 5-all in the second, and grabbed the chances with both hands to serve both sets out.

"We had played them twice before and we were 1-all, so we knew we had to come out and play well, like we've been trying to do every match here at the WTA Finals," Sania said after the match.

"We just tried to come out and play our best, and that was enough to win today." After joining hands, Sania and Martina have won eight women's doubles titles, including two Grand Slam titles at Wimbledon and the US Open this year.

Sania and Martina are just two wins away from their ninth WTA doubles title since joining forces eight months ago.

"It feels pretty good!" Martina said after the victory. "Sania came up to me and asked me why don't we try to play together, and at first we both had our partners, but as soon as we started we won a hat-trick right away at Indian Wells, Miami and Charleston. It was amazing how fast we clicked.

"It was a dream to come here to Singapore, and hopefully we can keep winning here."

Sania and Martina will face third seeds, Chan Hao-Ching and Chan Yung-Jan of Chinese Taipei in the semifinals. Sania had won the women's doubles title at last year's WTA Finals with Cara Black of Zimbabwe.