Anett Kontaveit handed Czech Karolina Pliskova a 6-4, 6-0 drubbing to become the first player to qualify for the semi-finals while Garbine Muguruza came from behind to defeat Barbora Krejcikova 2-6, 6-3, 6-4 at the WTA Finals in Guadalajara, Mexico on Friday.

Estonian Kontaveit dominated the round-robin stage match and closed out the opener with a drop shot to break Pliskova's serve, having saved three break points in the third game.

The third-seeded Czech could not get a foothold in the second set as Kontaveit dropped only one first-serve point, while Pliskova struggled with her second serve.

It was Kontaveit's first win in four meetings with Pliskova.

The WTA Finals divides the players into two groups of four, with each player competing in three matches. The top two from each group advance to the semi-finals.

Kontaveit beat world number three and French Open champion Barbora Krejcikova on Wednesday and is now guaranteed to finish in the top two in the group. 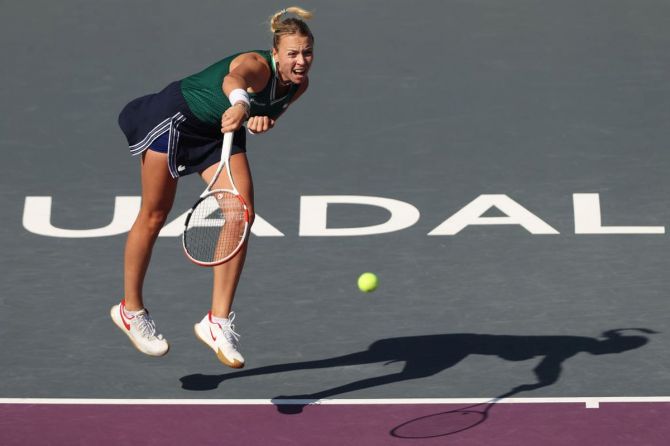 She came into the match on a career-best 11-match winning streak, having won the Transylvania Open and Kremlin Cup while reaching the quarter-finals at Indian Wells last month.

The Estonian has 28 wins in her last 30 matches.

"I've really been enjoying being on court, just having a good time," she said.

"I think that's been the main thing why I've been doing so well. I do feel like I can take on everyone. I never expect an easy match, I always expect it to be tough. I just try my best when I go out there."

As for finally getting a win against the hard-hitting Pliskova, she said it was all about having a short memory.

"I wasn't thinking about the fact that I was three-love down in previous matches," she said.

"Every time you step on the court, you have a new opportunity. The previous matches don't really matter. It's a new day and you have to beat the player you're playing against." 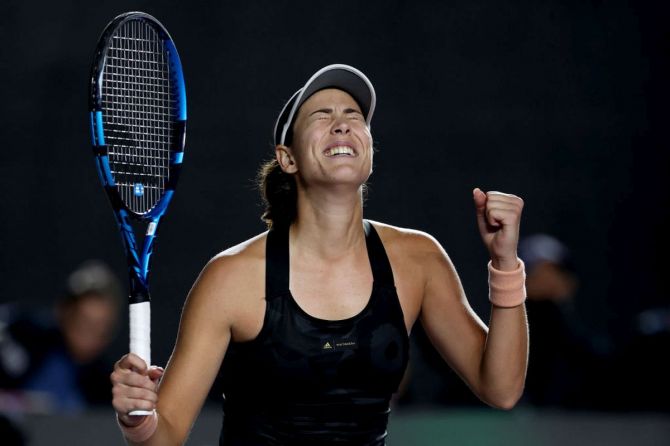 It looked like it would be an early exit from the tournament for Muguruza as she got off to a rocky start against second-seed Krejcikova.

But she improved in the second set and grinded out an early break in a lengthy game in the third to take a 2-1 lead she would not give back.

The Spaniard let out a mighty roar when Krejcikova sent a service return long on match point to complete the comeback.

Muguruza will next face Kontaveit, who will advance to the semis regardless of the outcome of that match, while Krejcikova will battle Pliskova.