There's something about Pune Strykers and thrillers in the inaugural Bridgestone World Series Hockey. There were two good teams, two good coaches, tight midfield displays from both sides and, finally, a goal each in probably one of the best matches of the tournament till date, which ended in a 1-1 draw, in Pune, on Wednesday.

Young Affan Yousuf rescued Bhopal Badshahs with a goal in the dying seconds, after penalty-corner specialist Gurpreet Singh gave the Pune side the lead in the 27th minute.

The 25-year-old Gurpreet is in contention for the 'Golden Stick' award. He leads the individual goals' tally along with Pakistani drag-flicker Imran Warsi, with eight goals each.

However, the Badshahs proved they could absorb pressure and came back strongly towards the 'death' in the match, as Yousuf sounded the board from a goalmouth melee, which followed after they were awarded two consecutive penalty-corners in the final phase of the match.

It was the second draw for the Strykers in four matches and they are the only team to remain undefeated in the tournament.

With two wins and an equal number of draws, Pune lead the eight-team league with eight points, one ahead of Sher-E-Punjab and the Badshahs.

In Jalandhar, Delhi Wizards staged a brilliant comeback in their crucial tie against favourites Sher-E-Punjab to scored a 2-1 verdict.

Shers dominated and created enough chances inside the circle, but their forwards failed to convert their brilliant moves into goals. On the other hand, Delhi kept its citadel intact when the going was tough and then pounced on its chances with a brace in the second half to cause the biggest upset of the tournament so far.

Fighting back in the second half, Delhi Wizards cancelled out the 1-0 lead before Gurwinder Singh struck the all-important winner in the 63rd minute.

Wizards notched their second win in the tournament while this was the first setback for the Shers, who were playing their fourth straight game on home ground.

Mathew Hotchkis scored a field goal in the 22nd minute to put the Shers on top only to see Manoj Antil equalise 18 minutes later.

Manjit Kullu was declared the 'Player of the Match'. 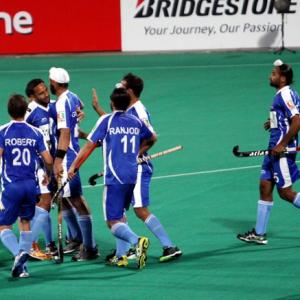